After watching the extremely underwhelming The Descent Part 2 (which I think I've bashed for three straight reviews now), I had somewhat low hopes for Cold Prey 2 (Fritt Vilt II), but our friends in Norway prove once again that they are not to be outdone and this scrappy sequel was a breath of (chilled) fresh air.

Cold Prey 2 is still immensely derivative of American slasher films (in fact, it's basically Halloween II in the mountains), but just like Cold Prey it provides a shot in the arm to the genre. Cinematically, the film is very steady on its feet, and some camera shots were so inspired or off-kilter that I had to pause the film and sit back to let their effects sink in fully. One in particular - a shot of a rescue worker's side mirror as he sees the bruised and beaten woman in the road behind him then opens the door and runs to her - is one of those "I wish I could have thought of that" moments that prove that cinema is much more than just pointing a camera at things and calling it a day.

The movie is full of moments like this, but simply listing them all would take the fun out of watching the film and reading this review. 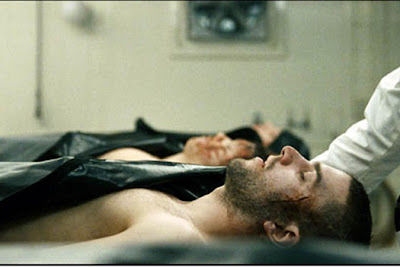 And looking at this picture of dead Eirik.

Jannicke (Berdal), the sole* survivor of the bloodbath in the first movie, is taken to a sleepy mountain hospital to recover (and await investigation by the police - she's covered in somebody else's blood). The hospital has fallen on hard times and is about to close down, so there's only a skeleton crew (pun 100% intended) on hand to help out when the bodies of her friends (and a gargantuan mountain man with a bloody pickaxe wound) are recovered from the bottom of a massive crevasse in the glacier.

The police chief sends two of his officers off to investigate Jannicke's claims about the Hotel du Murder up on the slopes and leaves one officer behind to guard her room while he checks some files at the station.

The force is short staffed but their reserve forces will arrive Tomorrow Morning.

Can you guess what happens next?

Did you guess that the mountain man is not quite dead and returns to his pickaxin' ways? A+ for you.

What follows is an extremely satisfying, if not totally groundbreaking slasher flick, much in the vein of the original. Now, because the Cold Prey movies have a reputation for being rote slashers with surprisingly high quality and emotional resonance, this isn't all by a long shot.

The characters, while less fleshed out than Número Uno, still manage to capture our hearts. There's Camilla (Rovik), the scrappy and headstrong nurse who'd be our best bet for Final Girl if Jannicke wasn't still hanging around. There's Ole (Wifladt), her boyfriend who's upset that her new job is in the far-off town of Smkyxlqberg; Audhild (Johanna Mørck), the pleasant and dedicated blonde nurse; Daniel (Vetle Qvenild Werring), a little boy with a broken arm who befriends the skittish Jannicke; various policemen and a senile patient who has trouble finding the bathroom; and Sverre (Mats Eldøen), who has a crush on Audhild and unfortunately not me. 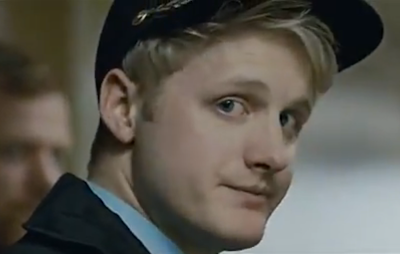 He knows he looks cute in that baseball cap. 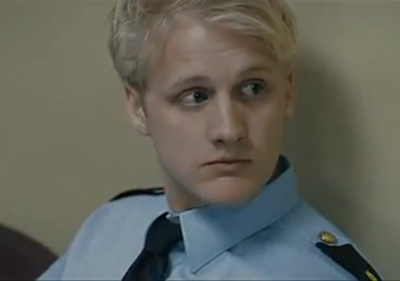 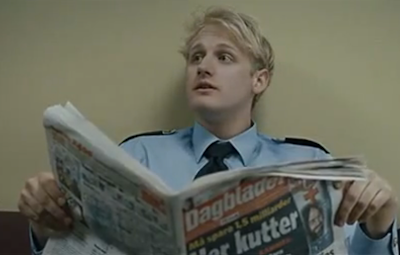 This is getting adorable. I mean annoying. 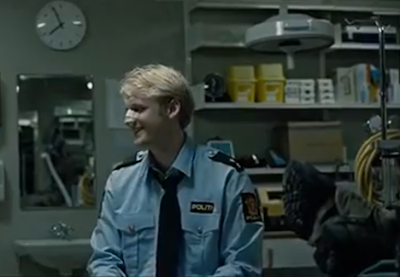 manages to avoid most of the major flaws of being a slasher sequel. Apparently, when the Norwegians were hitting up American movies for ideas, they also took notes on their mistakes.

Remember the deplorable Mirror Scare used in every movie where the character bends down to spit in the sink/wash their face/pray to the faucet gods and when they look up, something is behind them in the mirror? Cold Prey 2 makes great use of mirrors (see the blurry screenshot above) without ever once resorting to such cheap thrills. Car mirrors, medicine cabinets, those mirrors used to see around corners - all are cleverly used to enhance the thrills of the film and it is a wondrous sight to see.

Which brings me seamlessly to my next point - that the aura of the first film is not violated but isn't ripped off. There's still plenty of heavy steel doors and narrow, ill-lit hallway action in this alpine hospital and even though we already know the main antagonist, there's still a slow burn so we can settle in with the old characters and meet the new before the horror begins in earnest.

And, like most sequels, this one concerns itself more with the backstory of the killer as a way to deepen the universe of the franchise. Somehow, this film hit the lucky balance with providing us enough backstory to keep us interested and crank up our fear of the villain (he's basically unkillable) without bogging us down with unnecessary mythology (for that, please see Cold Prey III, which was never supposed to happen).

Run! Run from the tidal wave of mythology overspill from the set of Paranormal Activity V!

Not that this film is perfect. My theory is that the cinematographer had an astigmatism, which is why he decided to keep the beginning of every important shot blurry for five seconds longer than it needed to be. And we are unfortunately not totally free from Stupid Horror Movie Character Decision Making when Jannicke fails to murder the heck out of the felled killer, leading to an admittedly cool but totally unnecessary climax at the snowy hotel.

All in all, this is a great followup to a great slasher film and I'm not complaining one bit.

TL;DR: Cold Prey 2 is a surprisingly solid return to form for the Norwegian slasher franchise.
Rating: 7/10
Should I Spend Money On This DVD? Actually, yeah. It's one of the best slasher sequels I've ever seen. And it's foreign so it has cachet.
Word Count: 1051
Reviews In This Series
Cold Prey / Fritt Vilt (Uthaug, 2006)
Cold Prey 2 / Fritt Vilt II (Stenberg, 2008)
Also sprach Brennan at 7:51 AM