We'll be Together For One More Night 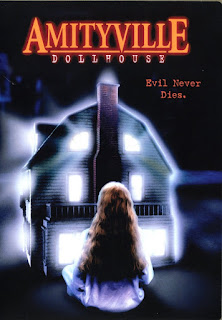 We’re almost there! The end is in sight! Before the remake swept the franchise back into theaters for a brief cultural resurgence, the Amityville franchise was quietly drowning in the muck of the direct-to-video swamp of the 90’s. The last bubble of air the series let out before sinking to a watery grave was the 1996 project Amityville Dollhouse. That’s right, the last feeble attempt to remind the world that this once respected haunted house staple used to thrum with life and vitality was called Amityville Freaking Dollhouse. 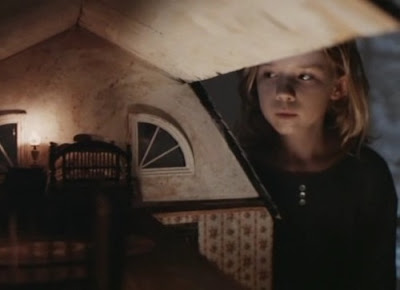 I’d lament how the mighty had fallen, but I didn’t even like the original all that much.

So… Guess what this movie’s about. Actually, you know what? That joke isn’t fair. It might seem obvious, but not one foot trod fiery ground in Jason Goes to Hell: The Final Friday (not to mention that it certainly was not the last one) and there was no cackling broomstick jockey in Halloween III: Season of the Witch, so it’s not wise to make assumptions. But yes, the eighth film in the Amityville franchise is about a haunted dollhouse, shaped exactly like the abode that haunted a million late-70’s nightmares.

Frankly, if this was the only way we could return the excellent spooky design of the original house to the fold, so be it. I’ll sacrifice logic for one last prolonged look at the best piece of imagery any of these infinite, mostly dreadful films had to offer. Logic be damned!

So this dollhouse is located in a locked shed on the grounds of a home that was burned down, leaving only the chimney standing. A new house has finally been built on the property (the film seems to strongly imply that this is the very same Long Island lot that has visited so much grief on so many terrible families, even though it was so clearly shot in Southern California that you can practically smell the In N Out) by one Bill Martin (Robin Thomas, who most recently played a main character’s father on Crazy Ex-Girlfriend). He’s attempting to Brady Bunch his family with his new wife Claire (the brilliantly named Starr Andreef, who had a brief horror career starting with 1983’s D&D slasher Skullduggery), but her obnoxiously nerdy son Jimmy (Jarrett Lennon) is having a tough time fitting in.

Bill’s young daughter and Carol Ann stand-in Jessica (Rachel Duncan) gets along with him fine, but his teen jock son Todd (Allen Cutler) doesn’t know a life outside of pummeling dweebs. Actually, come to think of it, nobody knows a life outside of this house. Neither Claire nor Bill seem to have jobs to go to, and the kids clearly don’t have school because they’re home at all hours of the day. Maybe they’ve slipped into some sort of pocket dimension created by the evil dollhouse.

Anyway, Jessica receives the titular dollhouse as a last-minute birthday present, and it quickly becomes clear that it exerts a wicked influence and whatever happens to the miniature happens to the real house, centralized around that original fireplace. So, spooky-ish things happen for an hour and change, almost nothing that gets set up is ever paid off, Claire develops a hankering for Todd’s young flesh because at least one out of every three of these films has to have a creepy Lannister vibe, and the dollhouse eventually manifests as the slowly moldering corpse of Jimmy’s dad (Clayton Murray) á là An American Werewolf in London. 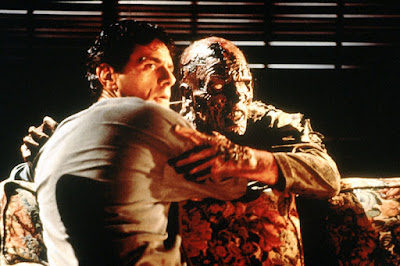 Even for a film called Amityville Dollhouse, this one is kind of a mess. The plot, as basic as it is (it’s about creating family relationships – mostly between Jimmy and Todd and Jimmy and Bill) spins in circles for so long it vomits all over itself, then barely recovers in time to slap in a resolution via voiceover seconds before the credits roll. In its dizzying rampage, half a dozen subplots fall to the ground, shattering horribly (most notably an absentee mother who is mentioned twice and never brought up again). And while the dollhouse is never adequately explained and no would one wish it to be (how could that explanation not have been incalculably stupid?), it doesn’t even follow the rules it sets up for itself, and even more egregiously fails to explore its own potential.

In a key scene, a pet mouse crawling into the dollhouse manifests as a giant rodent rattling Jessica’s bed with its sheer bulk. It’s cheesy and cribs more than a little bit from The Exorcist, but that genuinely interesting concept is tossed aside in favor of scenes like the random family members who are also convenient witches performing the most clichéd séance in the history of cinema.

Although I shouldn’t have expected more of a film so unsubtle that the way it develops Jimmy the Science Whiz’s character is to have him drop some unspecified chemicals on ghost goop, watch it fizzle, and mutter “fascinating.” This never comes up again. 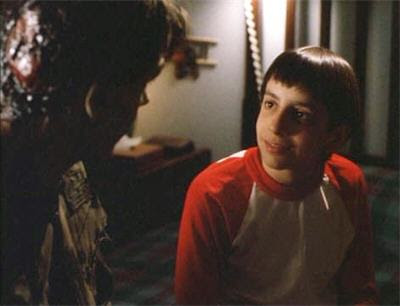 Amityville Dollhouse is about as nuanced as a kick to the crotch, but it has one or two good things going for it:

Thing #1: Todd is actually pretty hot, and he gets way more sex scenes than a domestic family drama really ought to have. Also there’s some naked breasts lying around, if you’re into that. 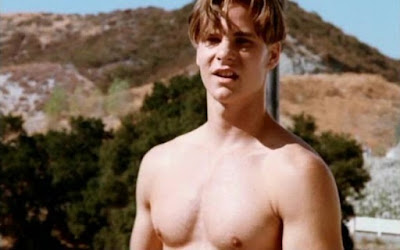 Lord knows, we all need something to get us by in these trying times.

Thing #2: The inconsistency of the plot provides a sense that just about anything can happen, and it very frequently does. Unshackled from any sense of logic or narrative decorum, the dollhouse’s manifestations are birthed from a feverish pit of haunted house tropes and creative decay. Rubbery Troll 2 monsters rub elbows with giant dead wasps in voodoo dolls and piñata tarantulas in this movie’s desperate quest to reach the finish line. 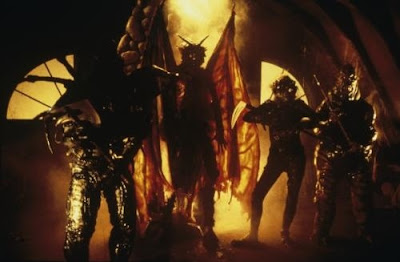 It’s nothing we haven’t seen before, but at least it’s presented in a pattern so inscrutable that it almost feels fresh.

Amityville Dollhouse numbers among the worst entries in the franchise, but at the very least it’s squarely the best of the worst. And frankly I’m shocked we’ve gotten this far without some truly egregious acting (Dollhouse fares the worst, with a  moment where Jessica utters a disappointed “oh…” in what is supposed to be sheer terror - but even this entry had inoffensive performances all around), so that’s at least something to be thankful for. But seriously, who needed the Amityville franchise to get this far? The movie was bearable, but there’s no reason for anyone to watch it ever again, even for ironic camp value.