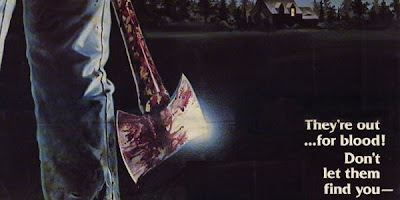 Census Bloodbath is my pride and joy. When I realized I'd seen a pitiful amount of films in my favorite genre (slashers) in their Golden Age (the 1980's), I embarked on a project to watch and review all of them. All. Of. Them. That's close to 500 movies released in the ten year period between 1980 and 1989. Dear god, what am I doing to myself...

At the end of each year, I'm writing a wrap-up where I discuss the best and worst films of the year, the general style of the representative films of the year, and their place in the history of the genre overall.
Here are the basic criteria I have used, though there are exceptions to pretty much every rule I lay out:
1) The film must have been released (theatrically or straight to video) in its home territory between 1980 and 1989.
2) The film must be of feature length, which I define as 50 minutes or above.
3) An anthology doesn't count as a slasher if only one segment is slasher-themed.
4) Murders or the threat of murder must be continuous throughout the movie, not just in an intro flashback or a short burst at the end (like in Carrie).
5) There is frequently a thin line between the slasher and the home invasion, siege, and revenge genres. For films that are borderline, I have used my own judgment to determine where they fall.
6) Same goes for slashers involving non-traditional killers like monsters, ghosts, zombies, etc. There needs to be slightly stricter adherence to the formula than just a bunch of deaths in order to be approved.
7) Ditto cannibal and cult films.
8) There is also a line that is crossed when the body count becomes too high, or there are too many killers at once, like a zombie film or something like Cell or The Crazies. These I will count as "mass pandemonium" films rather than proper slashers.

Here you can find my list of completed reviews in alphabetical order by year as I get to them. Enjoy!