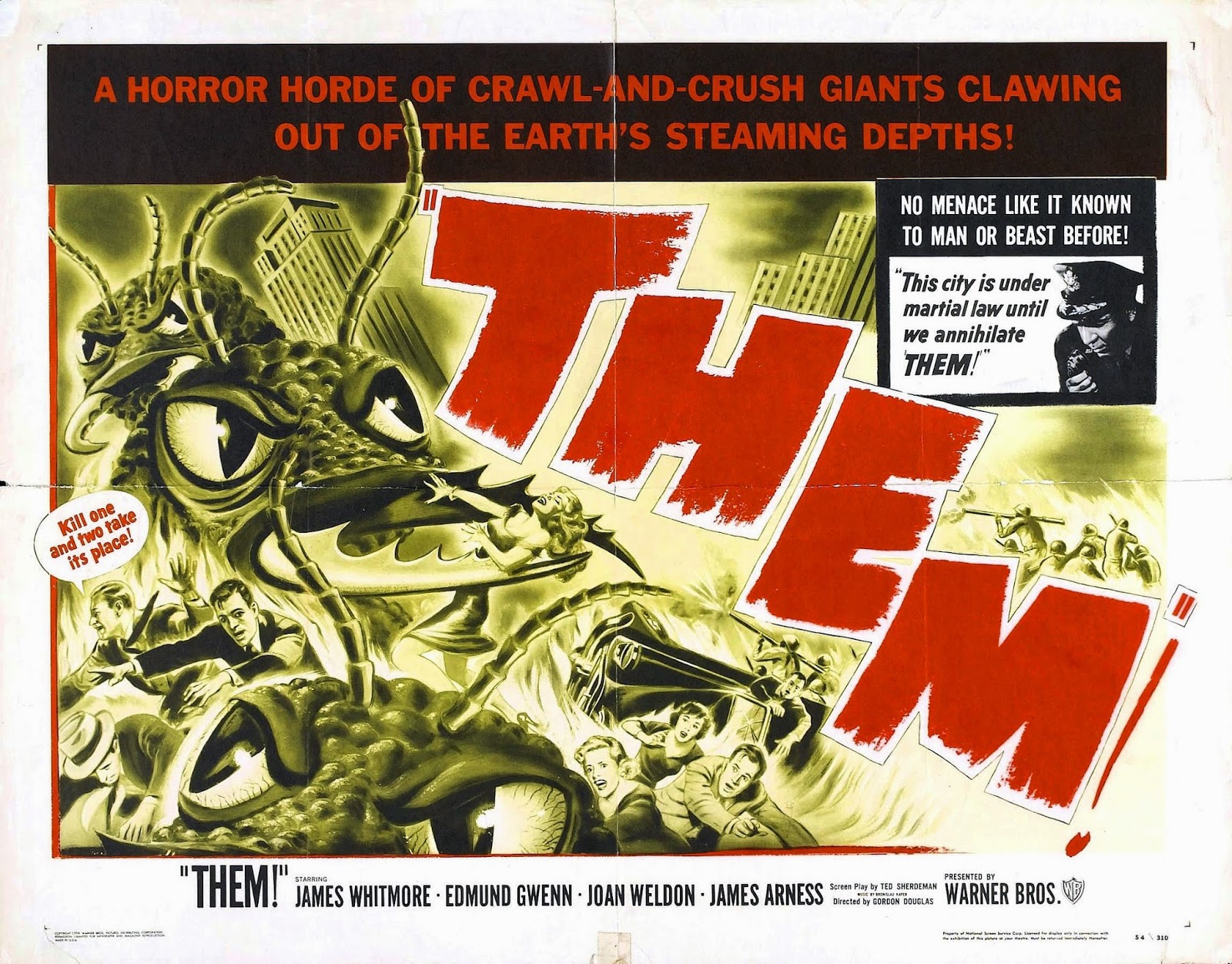 I suppose I have some 'splaining to do. When Hunter at Kinemalogue and I decided to switch genres for a crossover in October (I took on 50's sci-fi classics and he took on 80's slasher movies), we were supposed to be finished by the end of the month. We assumed there would be some overspill (obtaining, watching, and writing about movies is a more time consuming job than you'd think), but I had so much trouble getting my hands on Them!, that it's taken until now to complete my task. Yet the insidiously crappy Invaders From Mars was readily available to me. The world continues to be an impenetrably mysterious place.

Regardless, after some time I have retrieved a copy of Them! from the netherworld and this creature feature may finally be laid to rest. 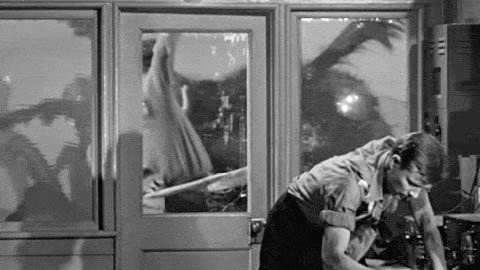 Them! tells the story of - well, it's giant radioactive ants. That's pretty much what there is to it. There's brief nods at a serial murder mystery in the beginning, but we all know it's ants. Even the characters them(!)selves seem to be biding their time, waiting for the moment we discover that it is, in fact, ants. After nuclear testing in the New Mexico desert, irradiated ants grow obscenely large and terrorize the countryside in search of food. Their favorite delicacy is sugar, but in a pinch humans will do.

On the tail of these aforementioned giant ants are FBI Agent Robert Graham (James Arness), state police Sergeant Ben Peterson (James Whitmore), and the father-daughter science making team of Harold (Edmund Gwenn) and Pat Medford (Joan Weldon). Pat is beautiful and is treated just like any beautiful woman in the 50's. That is to say, poorly. But at least she escapes having to be a half-hearted love interest to some heroic bachelor, mainly because Them! is too (relatively) action-packed to really care to spend too much time on its characters.

I say "relatively" action packed and I mean it. Them! is, of course, a product of the low budget B-movie system of the 1950's and as such only has as much monster mayhem as it can afford. But in the moments where it barrels full steam into kaiju territory, it's a fun ride full of authentic explosions, gunfire, actual real life flame throwers, and giant glassy-eyed ant puppets that don't do much to assert their reality, but at least have a scale and heft that lends them(!) a decent amount of power. 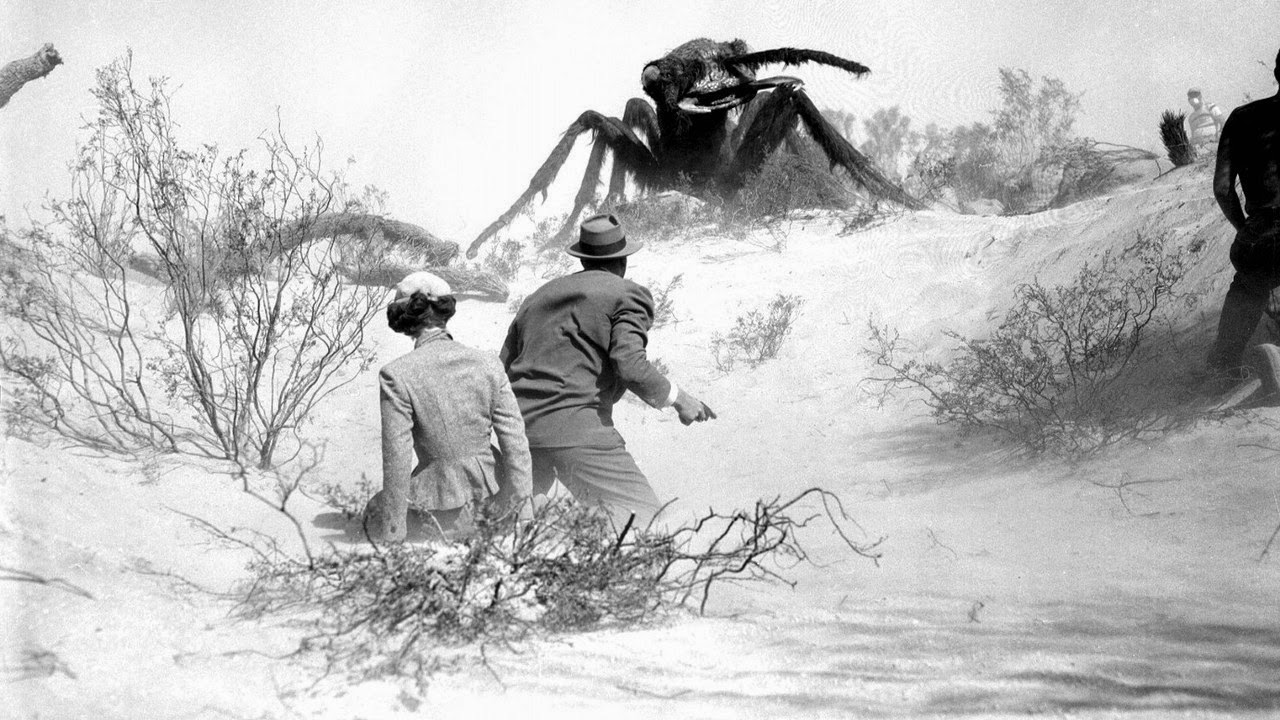 This is either forced perspective or a two story ant doll, but either way I'm impressed.

For the rest of its runtime, Them! concerns itself mainly with scientific dissertations on ant lifestyles and Dr. Medford giving ominous warnings about the fate of the human race before it portentously fades to the next scene. You see, this film is one of them(!) message sci-fi movies which, like that same year's Godzilla, fixes its metaphorical sights on the consequences of nuclear weaponry. Its quick and dirty explanation is perhaps less deft at evoking this subtext than the Japanese film, but that culture had an understandably more difficult time processing the phenomenon.

But what it lacks in total cohesion, it makes up for in bleak solemnity. After an hour and a half of campy/educational frivolity, the film slams the audience with the idea that this won't just be a one time thing. Mankind's hubris will return time and time again to slam us into the ground. And if that's not awe-inspiringly terrifying, I don't know what is. 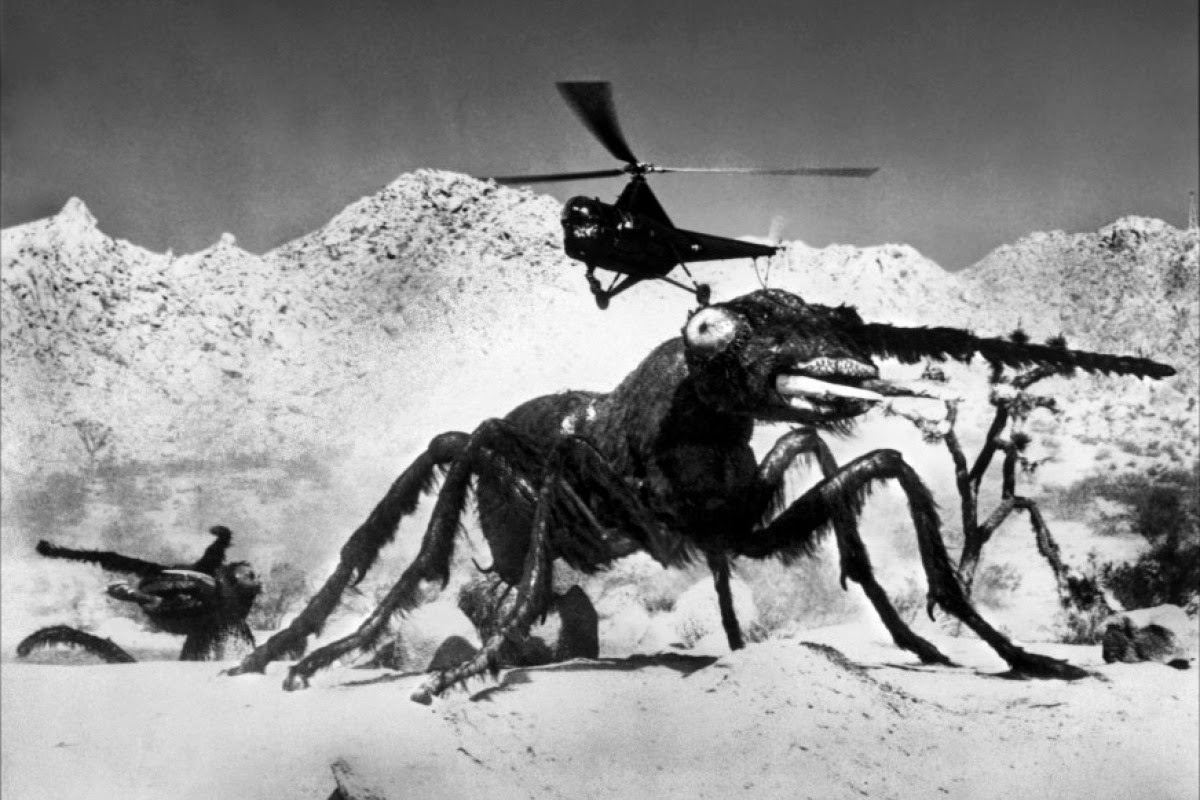 Not this, at any rate.

Besides its decently solid premise, perhaps the greatest strength of Them! in today's cinema landscape is how thoroughly quaint the whole thing feels. Every actor speaks in that oh so special 1950's cadence that lies somewhere between wooden acting and regal carriage, ranging from "radio newscaster" to "full-on Rocky Horror Criminologist."

Their unwavering faith in the Good Ol' Boys, unironic repeated use of the Wilhelm scream, and plucky child characters are like a portal to a lost time in which, in spite of the moral complexities of the global context, the world at home was easily understood by all who inhabited it. I'm absolutely not saying that it was a better time because everybody but the most deluded nostalgiaholics truly believes that. But that simplistic worldview is charming in its unassuming innocence.

One favorite moment of mine involves the radio broadcast of a press conference about the giant ants once they take root under the city of Los Angeles. As the doctor speaks, the film cuts to different civilians all around the city taking notice and listening in. Included among the various shots of men in bars and office workers in cubicles are a couple at Make-Out Point and a quintet of girls sharing milkshakes in a diner booth. You can't make this kind of stuff up. 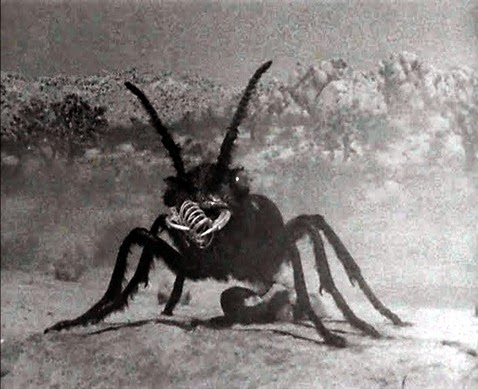 Though, to be clear, the giant ants are entirely fictional.

So all in all, Them! is a pleasant way to while away 90 minutes. It's stolidly old-fashioned, atypically exciting (though if I hear that menacing ant noise that sounds like a squeaky tricycle wheel one more time, I might just burst a basket), politically astute B-movie. Them! is not without its pacy moments and didactic moralizing, but if you're a fan of old films or are experiencing a lack of ant-based educational materials on your television, look no further.