Reviewing Jane: I Am Only Kept Back By My Natural Awkwardness 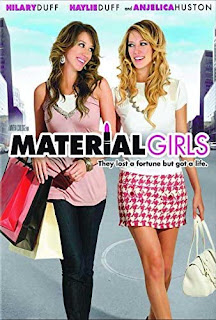 We have had an unusually high number of female directors in this movie marathon, even considering that being a Jane Austen adaptation lands you squarely in Hollywood's "chick flick" corner, where they sometimes, grudgingly, let women have jobs. Most of the genre's best entries have come from women, surprise surprise. And Material Girls, the 2006 modernization of Sense and Sensibility that seems to have kicked off a small glut of copycat adaptations in the late 2000's, didn't lack a pedigree. It comes from director Martha Coolidge, after all, of the original Valley Girl. 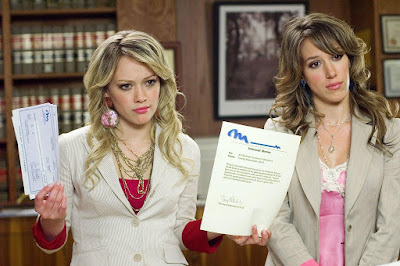 But here's the thing. I don't really like the original Valley Girl, and stars Hilary and Haylie Duff are no Deborah Foreman and Nicolas Cage.

Material Girls is the story of sisters Tanzie (Hilary Duff) and Ava (Haylie Duff) Marchetta, two ditsy Paris Hilton analogues who are the faces of their late father's makeup line. When a recall scandal hits the company's newest product, hawkish cosmetics mogul Fabiella Du Mont (Anjelica Huston) seeks to buy the company out from under them. The girls are left with nothing, forced to live with their former maid Inez (Maria Conchita Alonso), and build themselves back up from the ground up. Just kidding, they do what rich people do and cause chaos while never really actually suffering, but they do have to ride the bus. Despicable!

Also there's some men in their lives. Pro bono lawyer Henry (Lukas Haas) and chemist Rick (Marcus Coloma) both help them along their journeys. I didn't see fit to mention him here, but also Brent Spiner is skulking around playing the oily businessman in charge of the company's interests.

But why did I even bother listing any other cast members? ANJELICA HUSTON is in the movie, people! This is not a drill!

Would you believe that Material Girls opens with Hilary and Haylie Duff embalming a cover of a Madonna song beneath a heavy layer of shiny mid-2000's pop lacquer? Guess which song!

The movie exists as a vehicle for the Duff sisters, not so much for their talents, but rather as an excuse to hold them up to the light to let them sparkle and distract tweens for 100 minutes. There's nothing inherently wrong with that, it's just that nobody else making the movie bothered to give the girls any sort of support system, including - let me check my notes - a screenplay.

Instead, we get a parade of gags that indulge in the basest instincts of mid-2000's film comedy. Suicide jokes, multiple queer characters who exist only to be mocked, and gags about nose jobs and eating disorders are just the tip of the iceberg here. 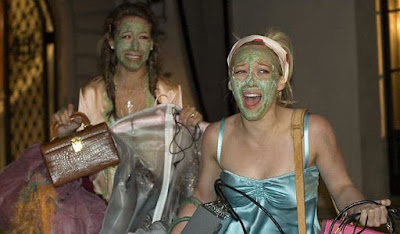 Are you sold yet?

I think I've discovered the flaw of Jane Austen's work that has allowed for so many mediocre modernizations. Her most popular novels have become so iconic they can be boiled down to a simple log line that everyone knows, so nobody has to actually read them. That's how we get a million Pride and Prejudice clones that toss a vaguely handsome man named "Darcy" at a woman and have them not get along at first before falling in love. The world has accepted that this is what Pride and Prejudice is about, ignoring the nuances of the storyline and characters.

The same tragic fate has befallen Sense and Sensibility. "Sisters were rich and now they are poor" is an absolute brutalization of that sharp, shimmering satire, and not even all the movies can get that right. Let us not forget Sense and Sensibility and Snowmen, which is about sisters... and one of them doesn't get along with a guy at first before they fall in love.

Sadly, Material Girls opts to fill everything around that paper thin log line with bloviating nonsense and references skimmed off the very surface of contemporary culture. Martha Coolidge might have directed herself an iconic teen movie once upon a time, but that time has passed and Clueless this ain't.