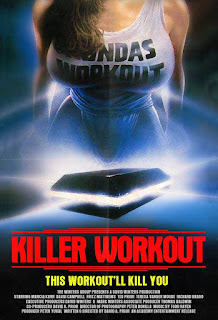 Whenever I need motivation to get back in the swing of things with Census Bloodbath, I always pull out one of the big guns: a title that I have yet to see that has stuck in my craw since I started doing research for this project many bloody moons ago. And frankly, I just couldn’t force myself to wait until this project reached the faraway year of 1987, because I had to see Killer Workout. AKA Aerobicide. AKA two of the laziest, most confusing puns ever written. How could one not be intrigued?

I can’t say I was disappointed with my decision. Killer Workout is terrible, of course, but it’s terrible in almost exactly the way it promises to be. “Almost” being the operative word here, but more on that after we roll out the plot. 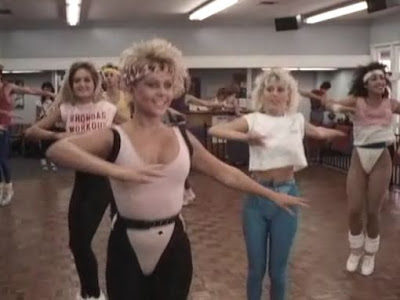 Insofar as you need a plot beyond the title “Killer Workout”

The Hollywood health spa Rhonda’s Workout is a big success. Dozens of legwarmered hardbodies flock there every day to participate in preposterous aerobics exercises so elaborate that the film required two choreographers. These folks are dying to get fit… and one of them is killing for it. A murderer brandishing an oversized safety pin begins to bump off the patrons one by one for reasons unknown. And yes, the killer’s main weapon is a safety pin, an implement so moronic that the slasher parody Student Bodies (which featured a murder via eggplant) couldn’t even have come up with it. 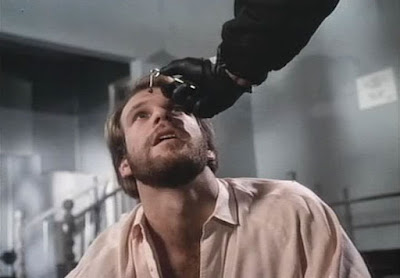 Obviously, this sends co-owner Rhonda Johnson (Marcia Karr of Maniac Cop) into a tizzy, especially when aggressively useless Detective Lieutenant Morgan (David Campbell of Scarecrows and Deadly Prey) starts investigating her customers and staff. There’s hardly been a better time to Meet the Meat, so let’s go for it:

The fitness nuts on the suspect list (or maybe the chopping block) include Jaimy (Teresa Van der Woude of Night Visitor, and damn if this cast wasn’t dedicated to the slasher genre), an aerobics instructor who shows up late to work in red stilettos with a purse full of condoms and is my new idol; Chuck Dawson (Ted Prior – Playgirl centerfold and brother of director David A. Prior - of Sledgehammer, Deadly Prey, and the delightfully titled crime thriller Hardcase and Fist), the senior owner’s mulleted new hire who is suspiciously good at beating the crap out of people; Jimmy (Fritz Matthews, also of Deadly Prey, and wouldn’t you know it but that film was directed by one David A. Prior), a horny meathead who comes onto all the girls and gets in approximately three to thirteen karate fights with Chuck as they work out their testosterone –fueled differences; and… 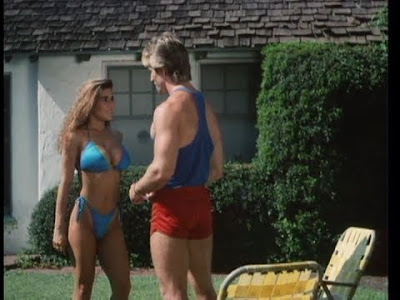 Wait, the rest of these one-dimensional fools don’t matter. There’s KARATE FIGHTS in this movie?!

Yeah, you read that right. At a frequency almost quicker than there are murders, Chuck has knock-down drag-out fights with as many men as possible, but mostly Jimmy. And these aren’t simple little scuffles, either. With almost as much choreography as the Kenny Ortega-esque aerobics sequences, these scenes all last two to five minutes, shading between wrestling match grandstanding (a trash can and a rake come into play later on), superfluous Karate Kid flourishes (so many spin kicks!), and boxing plucked straight out of a cartoon (one guy’s head is used as a speed bag). It is ridiculously macho, completely out of left field, and always bafflingly hilarious. This is the fuel on the bad-good fire that most campy slasher movies would provide with cheesy, creative deaths.

And it’s fortunate Killer Workout has that going for it, because those murder sequences really aren’t doing it for me. Yes, that giant safety pin is a ludicrous weapon that I will be discussing at parties for years to come (at the parties that I get invited to, that is a tame topic of conversation), but the scenes all play out at the most tame Psycho rip-off level of bloodless tedium. The weapon is raised into the air, we see a bunch of stabbing motions offscreen or in silhouette, and the victim falls to the ground. And maybe there’s boobs. 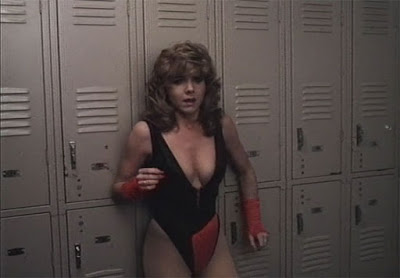 Though I guess Killer Workout must be commended for exactly toeing the line between horror and softcore porn without quite stepping over it. There is certainly a truckload of nipples on hand here, but the audience’s unsavory desires are mostly fulfilled by the endless shots of gyrating, spandex-clad bodies than actual sex or active nudity. And those exploitative scenes have the added benefit of being a showcase of the most maniacally patterned, poorly color-blocked fitnesswear the decade had to offer. So gay or straight, 80’s lover or hater, there’s something there for you to sit and stare at with goggle-eyed awe.

And that’s just the tip of the iceberg, as far as retro absurdity is concerned. A 1987 slasher movie about one of the decade’s biggest fads is the exact place to find some perfectly aged, fermented-just-to-the-point-of-rotting synthcrap songs for the record books. The soundtrack is a Frankensteinian grotesque, created by distilling Olivia Newton John and Cyndi Lauper, pouring it onto a John Carpenter riff, and overboiling it until is surpasses maybe even the Crystal Light “Champions” track as the best eldritch synthesizer nightmare with which to fuel your hardbody herky jerky.

I’m still not sure I’d actually recommend Killer Workout, because they play a dangerous game with the sheer amount of filler stuffed into its altogether brief run time (aside from the endless workout footage that may actually feature some Crystal Light athletes come to think of it, we get a clearly reshot sequence of graffiti-ers getting slashed up with a knife that in no way ties in with the plot or even the killer’s M.O., and a drearily extended sequence where the terrible Lt. Morgan tells us his father’s life story) and other than three or four cardboard characters, everyone else might as well be played by a Lycra unitard full of potatoes for all the dimensionality they’re given. And let’s not even pretend there was any chance it was going to be scary. No, Killer Workout is a goreless, milquetoast video relic that was mothballed for a reason, though it does feature its fair share of irresistible campy nonsense and frothy 80’s signifiers. It has far more rewatch value than a Majorettes or a Cutting Class, but it’s still just at the top of the middle. Slasher hounds should definitely make a pit stop here, but the casual horror fan can cruise on by without regrets.

Scariest Moment: A girl in a car tries to avoid a long knife that’s rapidly piercing through the roof of her convertible.
Weirdest Moment: Rhonda walks in on Jaimy just kinda staring at a jock strap and testing its elasticity.
Champion Dialogue: “Just relax, it’s not like I’m some kind of crazy killer!”
Body Count: 13; not counting a slit throat in an unnecessarily padded dream sequence.
TL;DR: Killer Workout is halfway an 80's bad-good gem, but the milquetoast kills don't drag it across the finish line.
Rating: 5/10
Word Count: 1345
Also sprach Brennan at 9:07 AM No comments:

I'm sure you've noticed that I haven't posted a single thing since Halloween, but I assure you this blog is still going strong. That Amityville marathon really tuckered me out, for one thing. However, I've also been so busy with work that the only movies I've been able to watch are current releases, which earlier this year I decided to no longer review.

I think I may have to roll back that pronouncement. For one thing, it's really kneecapped my ability to produce content. For another thing, it's something that I really enjoy. And for a third thing, I've decided to refocus my career efforts into an area of the industry that doesn't require me to be quite so diplomatic about the movies that I like or dislike.

Three cheers for this blog deciding to become relevant again!

That said, I probably won't post much new content until early December, when I will be reinstating my current movie reviews with the holiday tentpole franchises like Pitch Perfect 3, Star Wars Episode VIII: The Last Jedi, and hopefully not Jumanji: Welcome to the Jungle, which I pray nobody is cruel enough to drag me to.

Anyway, if you've missed me, here are some things that I've been working on outside this blog that you should check out!

For one thing, I started a weekly column at the pro-positivity horror web site Ghastly Grinning called the Horror Sommelier, where I pair new theatrical releases with a thematically linked horror film to make the perfect double feature! You can read that right here!

Also, the Pod People network has gained a new show! Keep Screaming is hosted by my good friend Ryan Larson and his friend Bee, they do a deep dive into my most favorite of genres: the slasher movie. You can find their web page here and subscribe to them on the Podcasts app!
Word Count: 317
Also sprach Brennan at 10:49 AM No comments: