In which we write mini reviews of films that explore the dichotomy of movie sequels. Both follow flicks released in 2000. One’s a bigger, better improvement and the other is a no good, scum-sucking disappointment that let its nascent franchise wither on the vine. 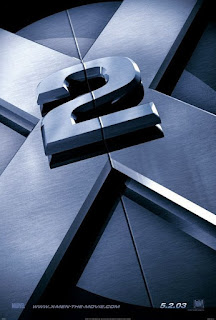 The X-Men and Magneto’s team of evil mutants must join forces to combat a bigger evil: a crazed colonel hellbent on destroying all mutantkind.

If you remember, Bryan Singer’s 2000 film X-Men was a slight but politically aware superhero movie that was fun but no masterpiece. What makes his followup X2 the pinnacle of the series is that it removes the slightness, but as close as it gets, it’s still no masterpiece. Beefing up the already sprawling number of X-Men with the teleporting Nightcrawler (Alan Cumming, rocking flawless blue makeup), the gender-bent Wolverine Lady Deathstrike (Kelly Hu of Friday the 3th Part VIII: Jason Takes Manhattan – got skeletons in your closet? Let me remove those for you.) and expanded roles for teen polar opposites Pyro (Aaron Stanford) and Iceman (Shawn Ashmore, wistful sigh), the cast is even more cumbersome but the political context is even more charged, coming in the wake of September 11th, 2001.

In X2, America is on the verge of Civil War as humans have become increasingly more aware (and afraid) of the mutants living among them. X2 puts all its cards on the table in the opening scene, in which Nightcrawler attempts to assassinate the president to promote Mutant rights. Not only is it a stunning action sequence on the bleeding edge of film technology at the time, it’s a heady parallel to both Abraham Lincoln and John F. Kennedy. The embers of political subtext (namely, gay rights) in X-Men have become a blazing inferno in the edgy paranoid grip of a post-9/11 society.

X2 maintains this social statement from frame one, though its intelligence flags at certain points. It’s astonishing that a film that contains a visual metaphor so complex as the scene where Professor X freezes all the humans at a museum right next to the exhibit depicting motionless Cro-Magnon figurines (indicating that humans are no longer the next big thing in evolution) could also be so wickedly unconvinced of its audience’s IQ that it needs Mystique to flash her eyes yellow in a place where she could easily be compromised just so we can know that it’s her in that dude’s body. But hey, this is Hollywood. Why should they have faith in us? We keep paying to see Transformers movies.

X2’s problem isn’t the occasional pandering, but rather the fact that its eyes are bigger than its screenplay. So many characters are crammed into these 2 hours that major players routinely vanish for half hours a time, and the movie heavily relies on X-Men to provide character backstories. Jean Grey and Cyclops get barely anything to do, Rogue has so little reason to be there that she’s literally tossed out of a plane, and Nightcrawler is shuffled to the back after we learn his tragic backstory, only to be called off the bench when the movie needs some deus ex machina, stat. The only new character given any real depth is its villain, Brian Cox’s Col. William Stryker.

But aside from that, X2 is even more fun and action-packed than the first. The fight sequences show a surer hand behind the camera, and the characters’ powers (especially Iceman) are far more integrated into both their fight choreography and their daily lives (Rogue blowing out ice cold breath after kissing Iceman is a playful, sexy detail that X1 could never have dreamed of). Plus returning arch-nemesis Ian McKellen is clearly having a ball here. His Magneto is alternately sassy, sardonic, and pure evil. He’s a joy to watch, and when McKellen is having a great time, you’re guaranteed one as well. 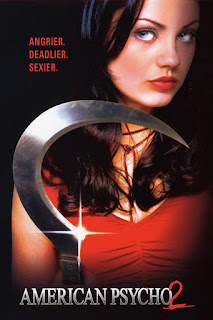 Rachel Newman (geddit?) murders her competitors for a sought-after TA position that will help her get into Quantico.

Could there be a more pointless sequel than American Psycho II? Well, Psycho II, I guess, but by all accounts that one’s actually OK. Let me rephrase that: Could there be a more pointless American Psycho sequel than American Psycho II: All-American Girl? Where the original was a cutting satire of yuppie consumerism and the pointless conformity of Wall Street, the sequel is about a quippy college student mowing down hardbodies so she can work for William Shatner. It might have been more at home in the 90’s alongside the likes of post-Freddy killers like the leprechaun, but it certainly has no place in 2002, poised at the very cutting edge of the torture porn zeitgeist. It’s an unnecessary, silly, and shallow slasher in a way that American Psycho is patently not.

Lucky for me, I have made a life out of enjoying silly and shallow slasher outcasts. Although American Psycho II still isn’t very good when you cut down to the core of it, it’s like Legally Blonde gone berserk, and I have room for that in my black, twisted heart. The novelty of seeing a wet-behind-the-ears Mila Kunis gnaw on a role that she has less than no grip on (her deep psychoses is mostly represented by a bunch of squinting) opposite an earth-shatteringly Shatnerian performance (ol’ Billy hisses every line like a syphilitic snake and It. Is. Sublime.) is certainly enough to power me through the duller parts, which this movie boasts in abundance.

The bloated second act is a repetitive slog of bloodless murder, apathetic alt-rock, and anemic puns livened up only by Robin Dunne as Brian, an entitled rich kid who’s hyperbolically venal and has the ill-advised hots for Mila Kunis. And he’s barely in it. This overly long portion of the film is a damn shame because, without it, American Psycho II would be a bad sequel magnum opus.

The opening act, which features a recast Patrick Bateman (Michael Kremko) being murdered by a little girl (yeah, sure) while Mila Kunis narrates, describing how she thinks they wrote a book about him (ha, ha), is a poppy, exciting chunk of early 2000’s schlock. Mila Kunis prowls the quad in a leather jacket and faces off against a lonely career counselor who has named her cat Ricky Martin. It’s a monster of pure innocence, cluelessly racking up scenes of hideously outdated trends and endearingly dim dialogue (Do you want to catch a bite to eat, maybe some dinner?”).

Then there’s the finale, which majestically unspools for a solid half hour after the plot has already ended, layering twist upon nonsensical twist atop a preternaturally straightforward story like an out-of-control soft serve machine. This is the act where we meet Rachel Newman’s mother, a blithering, incessantly complaining old hag ripped straight from the sweat-soaked pages of The Room (she even has a non sequitur line about breast cancer. What a time to be alive.) The interplay between this banshee and her crusty, leering husband is the stuff of f**king legend, a bad movie gold mine of biblical proportions.

I love so much about this movie’s bookending sequences that I feel bad rating it so poorly, but that middle third is so staunchly unimpressive that it drags its many glittering gems into the muck like a safe tossed into the Boston Harbor.