When I began this blog, I made a pact to myself to write about every movie I see, even if I've seen it before and no matter how old or random it was. The thing is though, sometimes it's hard to keep up. When I hang out with Henri or Cassidy, we'll usually watch two or three movies at a time and writing one review takes me about two hours with research, pictures, formatting, writing, and distribution. Did I mention I have a job?

So while I've done an admirable job (if I do say so myself) of matching review output with movie input, there are a couple films that slipped through the cracks. In an attempt to catch up with myself, I'm gonna throw down some mini-reviews. 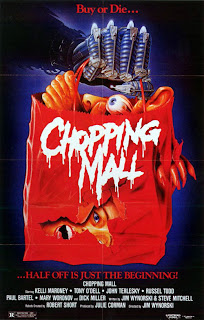 My notes on Chopping Mall are just as scattershot and hallucinatory as the film itself.

Produced by Roger Corman('s wife), Chopping Mall very clearly wants you to think it is a slasher movie, but it is so much more than that.

Park Plaza Mall has just installed a new security system in the form of robots that shoot lasers. This is awesome. And while the movie does follow a slasher recipe for a while - a group of teens has a late night party in the mall and begin to get mowed down one by one by the malfunctioning robots - by the third act it has transformed into an explosive 80's cheesy action extravaganza.

Full of Terrible Horror Movie Decision Making, weird sci-fi/action setpieces, and chipper robots telling their still-smoking victims to "have a nice day," Chopping Mall is one of those B movies that will forever have a devoted following. 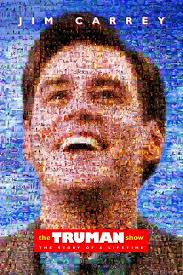 Although I already talked about this film in Sunday's installment of the Movie ABC's, it is worth pointing out that the world building in The Truman Show is unmatched in most 90's comedies. To carry out a high concept like "man's life is unwittingly broadcast worldwide" involves a lot of examinations of the repercussions of this format which are explored somewhat in the film - enough to hint at a much larger world around Truman that is clearly well thought out but not detracting from the major storyline of the film.

The Kids Are All Right 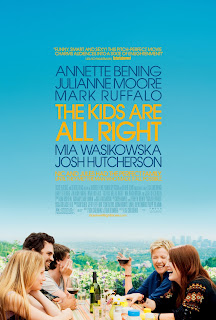 It turns out I fall just about exactly in between. The Kids Are All Right is a very human depiction of a particularly strong upheaval in the lives of a family headed by two lesbian partners. When Laser (Josh Hutcherson) convinces his sister (Mia Wasikowska) to contact their birth father Paul (Ruffalo), a wrench in thrown into their "idyllic" family life.

The control freak Nic (Bening) and her partner, the free-spirited Jules (Moore) find themselves on opposite sides when Jules embraces Paul's presence and begins work redesigning his back garden. The tensions that had previously existed between the two (Nic is too focused on her work; Jules doesn't understand the consequences of her actions) flare up brighter than ever in the presence of this new catalyst.

With an ensemble cast that breathes life into a pretty routine story, The Kids Are All Right is a pleasant but meandering exploration of the relationship between a long-standing couple that has taken their mutual love for granted. The most important element, the fact that a central couple is a pair of lesbians, is not treated as a novelty or a gimmick, which is the factor that led most to my enjoyment of a film that I typically wouldn't consider to be in my wheelhouse.