All We Are Is Dust In The Wind 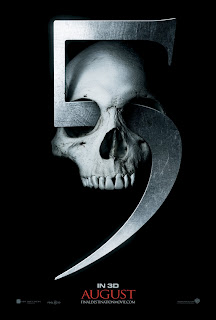 Because Lauren is awesome and lets me torment her, we got to watch the (current) final entry in the Final Destination series last night. After last time, virtually anything would have been a welcome presence on our TV screens, but luckily enough this film was solid as a rock. Specifically, a hurtling concrete slab.

It starts simple enough. A group of randy young workers hop on a bus to an office retreat. They throw around their share of "even if it kills me"s and 180 references until Sam (D'Agosto) has a terrible premonition of the bridge they're on collapsing into the river, taking most of them with it. And the film already throws a new wrench into the works. This premonition is the most involved of the entire series. Clocking in at about five minutes, a lot of time is spent on the victims and their attempts to escape. Not to mention the lovely Molly (Bell) actually survives the premonition. 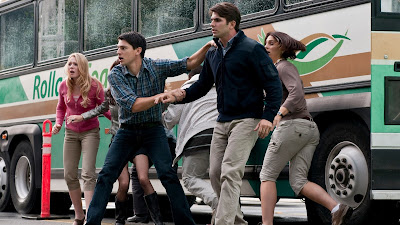 That cone is symbolic of something, I'm sure.

Sam wakes up, screams for everybody to get off the bus, and eight of them do. The inevitable investigation begins. I mean, wouldn't you check out the kid who screamed the bridge was going to collapse thirty seconds before 80 people plunged to their demise?

Anyway, it turns out it was just the wind (It's never just the wind) and the charges are dropped. Same old, same old. This exact scenario happened in the original film. But. The detective is still suspicious and decides to do some snooping around.

That's right, ladies and gentlemen, this is the first Final Destination film to have a legitimate B-plot, and that is something worth celebrating.

I think I'll spring for some of that laser eye surgery, myself.

Anyway, there's 8 survivors. Sam and his ex-(ish)girlfriend Molly, Peter (Fisher) and his girlfriend Candice (Ellen Wroe), Nathan (Arlen Escarpeta) the young factory foreman, and Olivia (Jacqueline MacInnes Wood) who thinks this is an appropriate outfit to wear to work... 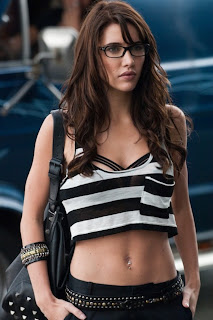 Also there's the lone adult, Dennis (David Koechner, who plays Todd Packer on The Office - the company in FD5 is a paper company. This is weird.) and Isaac (P. J. Byrne), who is the title character of my upcoming children's book The Douchiest Douche.

Do I need to say they all begin to die in mysterious Rube Goldbergian ways, usually aided and abetted by water leaks, loose screws, and their lucky charms? No.

Author's Note: The characters that are killed because of their lucky charms are my favorite. These movies have such a dark theme: "Your God has no power here."

Anyway, the gore isn't super convincing (partially because this movie was filmed in 3D and my DVD was not rendered that way), but it's a big step up from The Final Destination and it's nice and splattery. Likewise, this is the one film that doesn't need the gore as a crutch. I was practically almost as interested in the goings on outside of the death scenes as I was in the gore shots.

This film, with its frequent twists on a scenario that has not been strayed from even a smidge for four whole movies, its stressful and even more complex pre-kill sequences, a fight scene (and a good one at that), and Tony Todd turning in his fourth hammy performance as the omniscient coronor, Vincent Pricing it to high heaven, comes very close to being an actual good film outside of the splatter genre. No wonder this is the only Final Destination film to get a fresh rating on Rotten Tomatoes (Although it's by the skin of its teeth - if they dropped one percent lower, they'd be toast).

There's even a structural joke! That's right! This film plays with the idea of intrinsically being a movie. Isaac goes to a spa to get acupuncture (It ends well! Just kidding!). He can't understand his Chinese massage therapist and asks if she comes with subtitles. Next time she speaks, subtitles appear on the bottom of the screen. It might seem stupid and obvious, but that is (no joke) Arrested Development level humor, and this movie isn't even trying to be a comedy. I squirmed with nerdy pleasure.

This is a film that has absolutely no right to be anything more than another milquetoast clone of the original, but it approaches its core concept with deft skill that is leaps and bounds beyond any of its predecessors which, despite their high concept and hearty fanbase, are pretty much just run of the mill slashers. 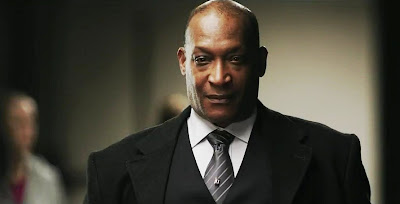 If anyone could make this film good, the Candyman can.

TL;DR: Final Destination 5 is way better than it has any right to be. The first actually good movie in the franchise.
Rating: 7/10
Should I Spend Money On This DVD? Why do I even have this section anymore? I liked this movie. Borrow it from me.
Word Count: 850
Reviews In This Series
The Final Destination (Ellis, 2009)
Final Destination 5 (Quale, 2011)
Also sprach Brennan at 7:17 AM