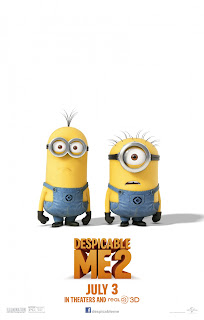 We're not even pretending that people care about things that aren't minions anymore.

Now let's make this very clear - this movie is definitely for kids. Forgive me for laughing like a lunatic during Gru's scene in the wig shop. Or awww-ing with the rest of them at anything the minions did - which was a lot this time around, Illumination Entertainment knows what's up.

Despicable Me 2 picks up within a year of its 2010 predecessor and Gru (Carell) has turned from the Dark Side of supervillainy to father the three adorable little girls who have stolen his heart. Aside from a subplot involving Gru being overprotective of the oldest, Margo (Miranda Cosgrove), these girls are shunted aside for most of the movie so we can watch minion antics. 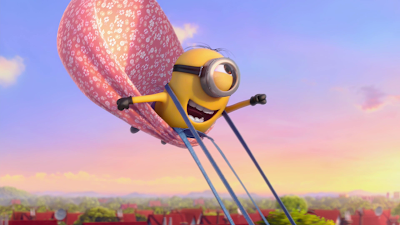 Honestly, this is great. You go, minions. Do your minion thing. 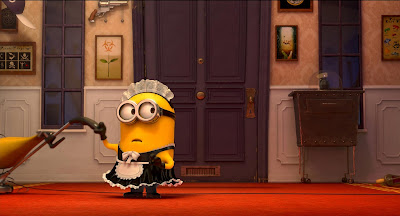 Gru is contacted by the Anti-Villain League because, as an ex-villain himself, he is the perfect man to go undercover and discover who stole a secret transformative serum that turns adorable little animals into ruthless killers. It's basically a G-rated version of the Hannibal Lecter/FBI thing. What follows is a stock spy narrative in which red herrings are tossed halfheartedly about and Gru grows closer with his partner, Lucy (Wiig).

Really the plot doesn't matter except as a framework for us to watch the lovable Gru and his incompetent minions interact with the world in ways that sometimes veer in the too-childish fart jokes direction but frequently shine with more wit than is necessary for a kid's movie. Now, it's no Billy Wilder screenplay, but it's harmless and doesn't actually feel like a sequel. This movie, aside for a few character details could absolutely work as a standalone and that is one of its greatest strengths. It just doesn't feel like a followup to the beloved Despicable Me, and thus isn't beholden to comparison, which would only do it harm.

Watching the film is like blowing a soap bubble. It'll pop soon enough and you'll never think about it again, but you can't help but gaze in wonder at its ascent into the sky. The tangible joy behind the creation of this film is even enough to justify the creation of a character that could only be a ploy to sell more plushies. 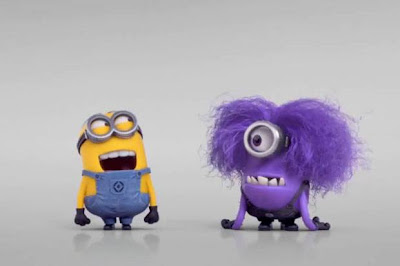 Sergio wants me to mention that they're Laker colors.

Unfortunately, plumbing the depths of this film does not yield pleasant discoveries. The film's villain is a grotesque Mexican stereotype that isn't necessarily offensive but is so knife edge close to crossing the line that it can be rather distracting at times. Also featured is a somewhat less contentious (if only because he's in less of the movie) Asian stereotype played by Ken Jeong, who is one role away from being cast as a poorly driving, violin playing mathematician.

But by far the single worst element in the film is one that is only featured prominently in two scenes, but both flies in the face of the original movie (the only time I'll directly compare the two) and is just small-minded. The youngest daughter, Agnes (Elsie Fisher) is rehearsing for her school's Mother's Day pageant and laments the fact that she doesn't have a mother.

Never mind the fact that her real mother abandoned her, and she adores Gru as her father, a fact which is explicitly stated later in the movie. She is not complete without a female influence in her life and, as a gay man, it is heartbreaking to see this idea make its way onto the big screen and into kids' minds. The scene is meant to be a setup for Gru's eventual romance (Spoilers? No.) but the film veers from peddling mildly un-PC racial sterotypes to straight up pointing at single fathers or gay dads and saying "You're inadequate."

Despite its two major flaws, Despicable Me 2 is too earnest and well-meaning to be truly malicious and is still a completely watchable and, at times, quite funny film. I would rate it 7/10, but I do have to dock a point out of fairness to my people. 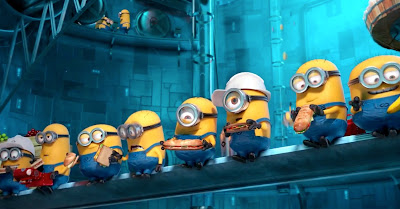 TL;DR: Although it walks a tightrope in terms of being politically correct, Despicable Me 2 is solid and clever children's entertainment.
Rating: 6/10
Should I Spend Money on This? Yes because minions.
Word Count: 756
Also sprach Brennan at 9:45 AM