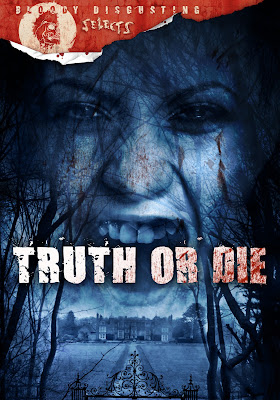 When Henri and were flipping through Netflix, we were cooling off from the somewhat disappointing afterglow of The Descent Part 2 and just wanted to watch a dumb horror movie. Which is essentially what we got, but we could never have anticipated the semi-quality of a movie with such a hideously funny name as Truth or Die.

Our first tip-off came immediately after the opening credits when the first character opened his mouth and a British accent came out! Nobody told us this was a UK film and we got very excited. Honestly, much like Charlize Theron's character in Arrested Development, the accents make the whole thing seem a little smarter. It's not, but what are you gonna do?

We join our young cast at a Halloween party fueled by dubstep, booze, and mountains of cocaine as they celebrate their first successful year at college - sorry, university. Don't ask me how Halloween fits into that timeline, I have no idea how their school schedule works. For all I know they call semesters something pretentious like "half-moons" or whatever. 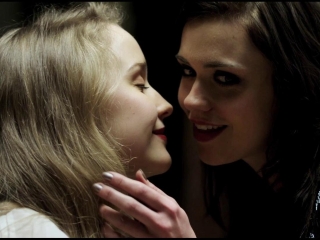 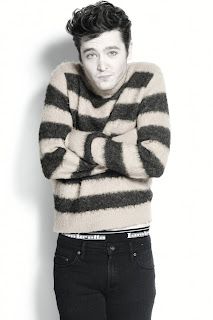 Also attending the party is Felix (Kane), a quiet nerdy boy with a massive crush on Gemma. He wants to snog her so hard she'll take him to the loo for a swift shag. Cheerio! Luke, the friendly neighborhood drug dealer, gives him some powdered confidence and sends him on his merry way. Needless to say, things do not end well, with a truth or dare game going awry (Felix basically admits he wants to bone Gemma and Chris picks a fight) and dragging the party to a halt.

Cut to months later, and the group seems to have no qualms about going to Felix's birthday party even though none of them really know him and he at least marginally hates all of them. Whatever. Free booze. They arrive at his family's mansion, but are directed by a creepy groundskeeper to a remote cabin in the woods behind the property.

There they meet Felix's brother, Justin (David Oakes) who says Felix hasn't arrived yet but they should feel free to party it up. Like most grown-up men and women over the age of 18, they decide to play truth of dare again! (This movie was clearly written for 16-year-olds before the filmmakers realized older people are prettier to look at) 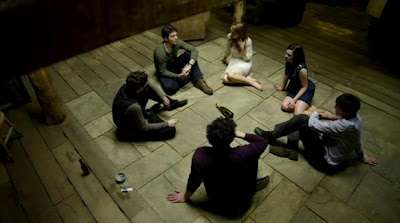 Let's play Seven Minutes in Heaven next! I'm looking at you, Luke.

I'll wrap this up before we drown in exposition.

Felix is not delayed. He is dead. He hanged himself after receiving a mean truth or dare related postcard (Sorry, I meant this script was written for twelve-year-olds) and now his brother must defend his family honor. 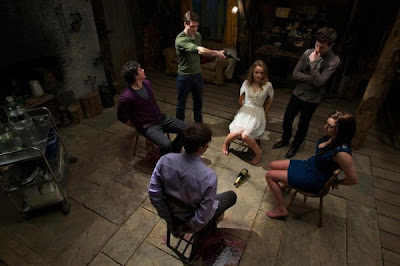 It's more fun this way anyway. Everyone always just picks truth and it gets boring.

See Luke standing there? For some reason, Justin implicitly trusts him and asks him to help out in terrorizing his friends. Luke does so for fear of being shot, but also probably because of the intensely homoerotic tension between the two of them.

I wish I knew how to quit (tormenting) you

This is probably a good time to mention that Justin is a real queer-basher. He constantly spews homophobic comments even when they aren't relevant to any part of the conversation. Fingers crossed that this is supposed to be some satirical commentary on the army or on psychopaths or... anything. Please.

But it really just feels mean-spirited and is the biggest flaw in an already deeply flawed film.

In between hailstorms of homophobic slurs, our horrible protagonists are asked "truth or dare?" The questions range widely from "Did you send the postcard?" to "Who do you think sent the postcard?" but things start to heat up when Justin breaks out the battery acid.

It's not a party if your insides aren't sizzling.

That's right, Truth or Die takes a serious left turn into Saw territory and although it is less focused on being horrifyingly gory, the killer game gets more and more complex as each member of the party has their morals and resolve tested. Secrets are revealed and people are scarred for life, just like every other game of Truth or Dare.

Without going into spoiler territory, the climax reminds me of the Scream finale - in a good way. It's actually pretty funny, to be completely honest.

So what we have is a movie where every decision is completely unmotivated and every plot twist is either absurdly telegraphed or utterly silly, but it's just so earnest and fun and packed with surprisingly intense moments that the hour and a half just flies by.

Also there's a grenade. Pulled out of nowhere. It's that kind of movie. We were expecting stupid fun and Truth or Die delivered, along with a half order of quality and a coupon for fond memories. 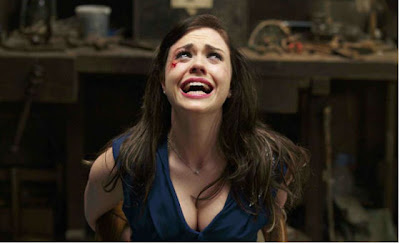 TL;DR: Truth or Die is a nonsensical British riff on Saw, but provides enough cheesy and intense moments to be great for slumber parties.
Rating: 6/10
Should I Spend Money On This DVD? Heck no, but it's on Netflix.
Word Count: 974
Also sprach Brennan at 10:46 AM