Beat It, Essay: Not Quite Worth the Price of... Well, You Know

This is the first essay from my second pair of essays in my Media Aesthetics class. Not to brag, but I also got an A+ on these. This is actually probably the best long term academic essay work I've done in my entire school career thus far, which is why I am proud enough to share them with you guys.

Prompt: Watch a narrative movie for the first time - from a mise-en-scène point of view. Write a two page paper that explores in detail how miss-en-scène was used in two scenes, one from act one and one from act three. 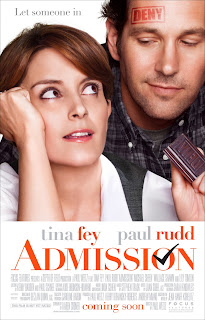 When most people discuss the elements of mise-en-scène, they refer only to movies that handle them well – movies like American Beauty that have complete control over each minute element of the frame and have a total understanding of that element’s importance to the narrative. However, it is equally important to discuss movies in which the mise-en-scène elements are not handled properly for, while firm control can make a masterpiece, a loose grasp can be catastrophic and can even actively work against the narrative.

On March 22nd, 2013, the film Admission was released. The film, a Tina Fey/Paul Rudd vehicle concerns the attempts of a Princeton admissions officer to get a gifted teen, Jeremiah Balakian, an acceptance – a teen that she believes to be her long-lost son. While the characters were likeable enough, and the plot fluffy and harmless, it was very clear that the director had very little understanding of the workings of mise-en-scène.

Take a scene from the first act of the film – Tina Fey’s character, Portia Nathan, is at home working on reading a stack of student essays when her coworker unexpectedly drops by, leaving her to watch over her two screaming toddlers while she runs to handle an emergency. The emotion at the center of the scene – Portia’s frustration at being pulled away from her work – is by no means complex, but is clumsily mishandled.

The lighting is a basic wash, with no additional technical elements other than those that indicated that it is, in fact, late at night. The scene was shot almost exclusively in a closed frame wide shot that was almost exclusively negative space. The actors were so small in frame, in fact, that it almost felt like watching a staged play from not too great seats. This, combined with the very simple lighting, effectively detaches the audience completely from feeling any sort of relationship with the character’s struggles.

The scene is set in an imposing Victorian mansion-like home that in no way reflected the character’s personality or sensibilities (in fact, in the very next scene, she mentions her joy at living a “simple life.”), and any feelings of comfort that could be used to indicate her desire to return to work are completely destroyed by the vivid orange color of the essay folders. Orange is one of the most jarring colors to the human eye, a fact that further alienates the audience from relating to the character. The only positive element is the costuming, which seems organic and natural to the characters in question, but the authenticity of the wardrobe only emphasizes how cut off one feels from the narrative.

The sound design was likewise lacking. There was not even a note of non-diegetic music to stir the audience’s emotions and the screaming of the children was somewhat muffled and nonthreatening, as if the foley artist accidentally left a sock on the microphone. The children that are supposed to annoy us end up feeling more like a background presence in the scene.

In short, what we have is a scene that is designed to make us feel at home, then pull us out of that feeling with discordant action. However the hopeless mismanagement of mise-en-scène elicits almost the exact opposite response. The opening “homey” shots are discomforting and the annoying children do not have enough force in the frame to have a true presence.

An emotionally charged scene from Act 3 fares slightly better, but still suffers from sloppy mise-en-scène. This is the scene in which Portia makes her arguments for accepting Jeremiah into Princeton. His grades are low, but he has proven himself to be a gifted prodigy. Portia must convince the firmly traditional Princeton Review Board to overlook his scores and admit him to the university over other, more qualified, applicants.

The lighting is once again a very simple wash, but in this case it is actually effective. Combined with the setting, a claustrophobic and drab white room, it evokes a sense of rigid compliance with norms, reflecting the environment into which Portia is presenting her case. The orange folders actually work in this scene, reflecting the discomfort and anxiety that she feels, and the costuming works in much the same way as the previously discussed scene. It is organic and believable, but nothing special.

The scene also features a fresh and clever use of open framing. When each applicant is being discussed, he or she can be seen waiting nervously behind the reviewers’ shoulders. This unique touch is inconsistent, however, and has much less emotional impact because not every applicant discussed appears, sometimes they appear too late or too early, and one even appears incongruously behind the wrong reviewer. This is tremendously distracting and bothersome, pulling focus away from this scene – one that the audience is supposed to be intensely invested in.

The sound likewise suffers from the somewhat muffled quality that invades the whole film and the music sputters and starts, halfheartedly punctuating the sad moments. Fey’s performance carries the entire emotion of the scene on its own, and while she does a commendable job, she is no match for the haphazard and awkward mise-en-scène that absolutely buries it.

While, it wasn’t necessarily a bad film, Admission sets an example for aspiring filmmakers everywhere. Even with strong performers and a mostly workable plot, it is exceedingly important to keep a firm grasp on every single mise-en-scène element. If they are ignored, they will rise up and work against you. And they will win. Incorrect handling of mise-en-scène can topple the emotional impact of a film, and it’s nearly impossible to recover from that.
Word Count: 1055