This is the final essay I wrote for my Media Aesthetics class, and perhaps the one I'm most proud of. I've decided to release it now because I'm going to see a screening of Scream at the Hollywood Forever Cemetery tonight and I am the most excited child.

(Apologies for the formatting in these essay posts. I really don't know what's happening here.)

Prompt: Watch your favorite movie with the sound off and write about its aesthetic attributes. How well are the story and character arcs conveyed visually? 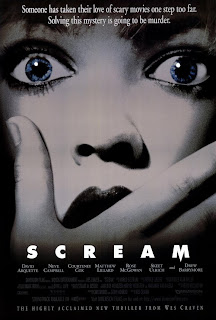 Scream is one of my favorite movies for several reasons. First, it is a witty, sharp, satire of the slasher genre. Second, despite being a comedy, it manages to be a terrifying movie in its own right. Third, the opening scene is one of the most perfect pieces of horror cinema ever put to film. Fourth (and definitely not final, but I don’t want this essay to turn into a laundry list), Wes Craven is one of the few horror directors who knows exactly what he is doing. Craven’s guiding hand is evident throughout, and his skill in directing is unparalleled except in the most classic of horror films.

From the very first scene, he has such control over mise-en-scène elements, it still manages to be scary even with the sound off. This exercise was a treat for me, because I got a chance to notice how much detail went into the visual storytelling of this film. The iconic opening scene with Casey Becker (Drew Barrymore) is mostly disconnected from the plot proper, but it is a very good place to start the discussion of Craven’s use of mise-en-scène.

Craven’s subtle use of costuming permeates the film, and in this scene, every single piece of Becker’s outfit foreshadows her imminent death. Her skin is made-up to be ultra pale, imitating the pallor of death, and her flesh-colored sweater and blood red lipstick foresee her fate. Another major element of the film is postmodern meta humor, with the characters aware of the fact that they are actually in a film. This is also subtly implied with a uniquely clever lighting technique. Casey has turned on the VCR to pop in a movie, but never gets to watch it. The blue light of the TV screen fills the room, implying to the audience that the movie is about to begin.

As she begins to be stalked over the phone by the Ghostface killer, crosscut shots of her forgotten Jiffy Pop on the stove mark the passage of time and frequent shots of the house’s exterior remind us that there is much more in the world outside Casey’s indoor suburban sanctum. Scream’s editing continues on a similar level for the rest of the film, with a particular penchant for the use of smash cuts to crane shots to transition between scenes. This catapults the audience along to the next beat of the story and keeps the pacing feeling snappy despite the film’s two-hour runtime.

As evidenced by the earlier examples, Scream has an idiosyncratic mise-en-scène style that gives it freshness (and enough steam power to revitalize the entire slasher genre). Another aspect of this style is the use of brightly lit, large suburban setpieces. Wes Craven’s obsession with suburbia was previously explored along the shady lane of Elm Street and continues in earnest here. In his films, people are attacked where they feel most at home and comfortable, and the sleepy homes of suburbia can feel just as intimidating and scary as a haunted castle or a secluded hotel.

When the killer is in the house, a once large suburban home can seem positively claustrophobic. This sense of claustrophobia is intensified by the use of almost exclusively closed frames. The film is so kinetic that the frames seem like they’re open, but this is an illusion caused by quick cuts. It is very rare to see a character leave a frame, and one begins to feel trapped without even realizing why.

I was surprised by how much of the plot was still relatable, even when completely silent. What I have just described is more of a broadstrokes vision of the film, but there is much subtlety and nuance in the design, especially in the area of character arcs. For the purposes of this essay, we will focus on three characters: Sidney Prescott (the heroine), and Gale Weathers (the tough-as-nails news reporter).

Gale is a self-obsessed, muckraking reporter with little care for the impact her yellow journalism has on the lives of those she reports on. Her character is introduced very kinetically – she is running after Sidney’s ambulance in a canary yellow pantsuit. The yellow exudes energy and focus, as do her actions. However, as the film progresses, she gets more involved in the murder investigations for reasons of saving Sidney, not merely getting a scoop, and falls in love with a handsome David Arquette along the way. In her final climactic scene, she is dressed in a brown leather jacket and a red blouse. The red reflects her newfound love and passion for her work and the brown represents the clouding of her focus on her career.

Sidney Prescott’s clothing is equally symbolic. In her introductory scene, she is portrayed as a pure, virginal, young woman, dressed in white floral pajamas. The white represents purity and the florals represent her youth and innocence. When her friends begin dying one by one and she begins to lose her grip on the world of her innocence (losing her virginity in the process), she can be seen in darker tones, and in her final scene she is covered in blood, which represents the loss of her virginity and the destruction of her innocence.

Through these details, the tension and overall tone of the movie can be maintained purely through the cinematography, the production design, and the editing. While Craven has weaved a truly spectacular tapestry of mise-en-scène elements, Scream has one major weakness. This movie was very clearly produced in the 90’s and the costume and design pieces have some of that ineradicable kitschiness that was inescapable in that decade, somewhat distracting modern viewers.

If that flaw is the biggest in the movie, that says great things about the rest of the film, and there’s no question why it’s one of the most influential of Craven’s oeuvre. Scream reinvented 90’s horror, brought postmodernism to the mainstream, and impacted the Halloween market for decades to come and without his careful control over mise-en-scène, Scream would be nothing close to the masterpiece that it is.
Word Count: 1118