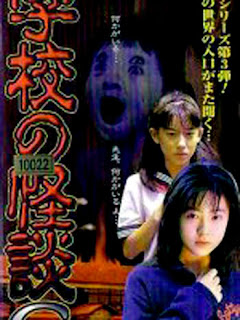 Alright, this is where things start to get weird. This is the Japanese TV horror anthology in which the Ju-On series got off to its sputtering start. There are 4 chapters to this film, two of which were directed by Takashi Shimizu and contain the nascent seed that would eventually birth a slew of incomprehensible continuations, remakes, sequels, and whatever the heck White Ghost/Black Ghost is. No, they are not good. Neither are the Ju-On movies though, so we can't really blame them for that.

A young girl is haunted by the ghost of Kayako Saeki for some reason.

Two girls are taking care of one rabbit over summer because Japan. One girl hurts herself on a clipboard and mysteriously vanishes when her friend goes to find a bandage. Upon returning, she is attacked by the burping ghost. She seems pretty unimpressed and then it's over.

This is where our beloved tale begins, in a cruddy TV spot that would make even some of the blurrier forgotten slashers cringe, looking at the production value. But let us not try to ascribe Hollywood quality filmmaking to a short that was made for the price of a packet of ramen.

Honestly, the woman ghost still proves to be the most effective part of the franchise, even though her presence here (outside of the home where she died) makes no sense in context of either the story or the movies that would carry on its legacy. I'll hold off judgement until Ju-On: The Curse, which I've heard continues some of these oh so tension-fraught vignettes.

A young man gets a mysterious phone call.

A kid rides up on a bike, hears a phone ringing, picks it up. The number displayed is a lot of 4's (as you may have guessed), and here's where it gets lost in translation. In Japan, the number 4 is associated with death. An English equivalent might be 1313131313. Or not. Whatever.

Anyway, he answers the phone and hears a cat mewling. He starts talking to whoever it is, jumping to major conclusions ("Are you here? Are you watching me?") and it turns out he's exactly right. Right next to him is twelve-year-old Toshio who is a cat (?).

This one was actually a little more chilling than the previous vignette, if only because it is so out of left field. I'm interested in seeing if the feature film continuation of these stories somehow makes the cat/not in the house thing make any sense.

My vote is no. 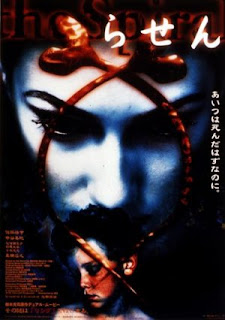 The mystery of Sadako Yamamura's cursed videotape is solved in the stupidest way imaginable.

Proving that Ju-On isn't the only film series that can have a mind-boggling sequel timeline, here comes the inimatable Rasen. Produced and released simultaneously with Ringu, Rasen was the original sequel and, though it was based on the next book in the series, audiences hated the direction it took. In fact, the hatred was so intense, the producers decided to make Ringu 2 and pretend this film never even happened.

So you can imagine my excitement when my DVD of Rasen got in the mail. Eager to prove the audience wrong (or dreadfully right), I put on my movie-watching cap (not real) and called up my Sergio (real) and we plunked ourselves down in front of the TV.

Sergio fell asleep within minutes. I envy him.

For, you see, Japanese audiences are evidently more on the ball than American audiences (see box office for Transformers: Dark of the Moon). I will never again doubt that their derision is misplaced. Rasen was, to put it rather elegantly, a boring suckfest.

It begins with the autopsy of Ryûji Takayama (Hiroyuki Sanada), the husband who died in the first film. He is being operated on by an old friend from med school who has a deep connection with him despite an early scene in which he couldn't remember who he was. And within the first five minutes, this movie has already retconned its predecessor to pieces.

Evidently, Ryûji died of a heart attack, not a ghost child crawling out of his TV. That would all be well and fine if that's just what the autopsy showed and the doctors were mistaken, but flashback footage shows us that is not the case. Evidently Sadako's curse is manifested via a virus that is transmitted optically into your eye, which copies the DNA patterns and recreates it inside you, and then you grow tumors on your blood vessels and have ulcers on your neck and have a heart attack and die seven days later and this is BS go away Rasen.

This movie has become a medical drama (replete with soaring daytime soap music), and an excruciatingly slow one at that. It has even more of a procedural feel than the original, and has exactly one scene that even mildly chilled me.

Also Sadako doesn't use the tape or the TV anymore and can show up wherever she pleases.

Also a diary written about the events of the first film can transmit the virus.

Also Mai Tanaka, the girlfriend from Ringu, is infected with the virus despite not having watched the tape or read the diary, and gives birth to a Sadako-possessed version of herself.

Also we see her face, which so isn't the point.

Also her womb has magic powers and can resurrect people to the age they were when they died.

Also they killed off my favorite child Yôichi pretty much immediately.

Also, Sadako's plan is to use the virus to spread fear and further human evolution.

F*ck you too, Rasen. 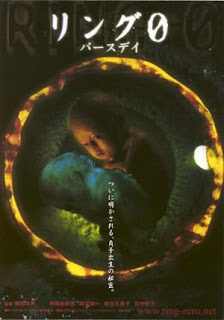 Sadako Yamamura is a young woman haunted by the ghost of herself as a child.

Does the little ghost girl from Ringu still haunt you? You're not alone. Nobody is safe, not even Sadako herself, apparently.

Ringu 0 is a prequel revolving around Sadako Yamamura as a young woman struggling to make it in her theatre troupe, which would put this film in the same continuity as Rasen. That is a place we do NOT want to be but they put in a great effort to tie it in with Ringu and Ringu 2, and it almost makes sense.

Which is forgivable, because it's the most sense any of these films have made so far.

Evidently, as a child, Sadako split into two beings, one evil and one good. Her father drugged the evil one so she would stay a child (quite logically, one would suppose. These things do happen.) and the other one grew into a beautiful young lady. Sometimes Sadako loses control of her actions and the little girl version of her takes over and she's moody and nobody understands her. It's basically a Japanese remake of Carrie

It's still more boring than creepy but it's a definite improvement on Rasen, and the final scene is actually pretty intense. Say what you will about the Ring movies, but they sure know how to end a plodding narrative on a high note. 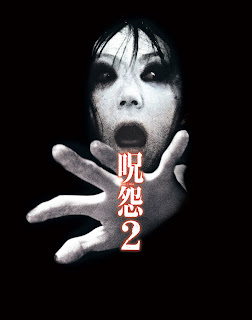 A Tokyo scream queen steps foot in the cursed house and her crew begins to die one by one.

The highly anticipated (sic) followup to Ju-On: The Grudge follows the apparent trend of J-Horror sequels, for it is better than both its immediate predecessor and its English remake. Takashi Shimizu returns for yet another round and I'd even say he'd hit his stride. Except for the fact that The Grudge came out a year after this one.

Ju-On: The Grudge 2 follows pregnant horror actress Kyôko Harase (Sakai) after she films an episode of a "Ghost Hunters" type show in the very house that spawned the Curse of the Burping Ghost. She and her boyfriend are driving down the highway when the ghost boy Toshio (Yuya Ozeki) hijacks the wheel and crashes the car. Her boyfriend goes into a coma and she miscarries, only to find out later that she is three and a half months pregnant.

This film wants to bank on its scary pregnancy body horror so Kyôko is actually a protagonist, appearing in every vignette.

Yes, this film is still episodic, but this time it follows a core cast of people - the crew of the ghost show. It does feature some timeline hopscotching and a mind-searingly long labyrinthine dream sequence, but because of all the vignettes being offshoots of one main storyline, it really does make sense, all in all. You know. For what it is.

Because of its basic narrative coherence, the creative scare sequences - a staple of the Ju-On movies - have much more impact. Here we have a haunted copy machine, a haunted boom mike, a haunted camera, a haunted wig, and a terrifying spider web of hair. Yup, the Japanese are still wetting their pants over technology. You'd think they'd stop making it.

Anyway, is it not obvious that in the end a ghost crawls out of her womb? It does and it is terrifying.

I don't know what it is about these stringy-haired ghosts. Sadako Yamamura, Kayako Saeki... They look the same, move the same, but in each film they are still uniquely frightening. I guess Japan knows a good thing when they see one. 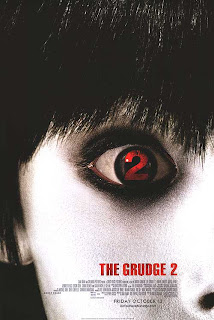 The rage curse begins to spread and Kayako and Toshio make their way across the pond.

Takashi Shimizu is a man with unparalleled levels of commitment. The Grudge 2 is his 8th and final Grudge feature. The film franchise comprises a good 25% of his entire working career. This is both admirable and extremely irritating because everything that made Ju-On and The Grudge so bad just won't go away. It's ineradicable.

Shimizu is no longer content shifting timelines between vignettes. Now he bounces back and forth between four timelines or so simultaneously across four different locales.

Buffy's sister (Tamblyn) is trying to uncover the mystery of the house in Tokyo, three schoolgirls are haunted at a Tokyo school (replete with lascivious butt shots in those Sailor Moon skirts they all have), a sick mother languishes in Pasadena, and a Chicago family is haunted by the ghosts next door.

Again, the scare sequences are too good for the surrounding film, and I really wish someone could just compile all the good parts of these movies and synthesize them into one behemoth of a J-Horror picture.  Although Toshio's presence is at a low ebb (the actor playing him was getting much too old at this point and he's viewed mostly blurry and from a distance), there are some really chilling moments and at one point my spine literally tingled, which has never happened to me before. I'm inclined to blame the temperature because this movie doesn't really deserve such a distinction but the fact is it happened.

So it's not a total waste of time.

Also thrown into the mix are a haunted payphone, another haunted cell, and a girl vomiting milk into  gallon jug and drinking it again.

Shimizu pulls out all the stops for his grand finale and it never quite lands (despite the film's extended run time, it never feels like any character is onscreen for an overall total of about ten minutes), but it revels in the coked out glory that is the Japanese ghost story.