In the Dark, Nobody Can See You Scream

For our Scream 101 podcast episode about this film, click here. 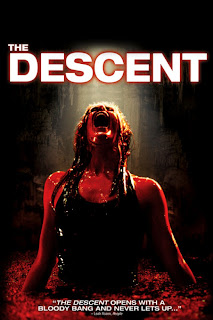 I'm just gonna come right out and say it. The Descent was so terrifying that Henri and I had to watch all of The Truman Show to feel like normal humans again.

This UK film follows a group of thrill-seeking girls who decide to go spelunking in a cave in the mountains of Appalachia. There's Holly (Nora Jane Noone), the bold and experienced (and possibly lesbian? Maybe I just hoped she was) adrenaline junkie. There's Juno (Mendoza), a brash and tactless woman. And there's Sarah (Macdonald), who lost her husband and daughter in a tragic accident, and for whom this trip was orchestrated - in an attempt for her friends to reconnect with her.

Also there's Sam (MyAnna Buring), Beth (Reid), and Rebecca (Saskia Mulder) who share approximately .16 personality traits. One of them is Sarah's best friend and one of them is her sister. And one of them is a nurse, I think it's the sistery one. For the life of me, I could not keep track of them.  It's really not important because the film is less about developing character (for the non-leads at least) than it is about balls to the wall claustrophobic torment. It is a mainstay on many people's lists of "Best Horror of the Decade" and it is plainly obvious as to why.

The girls are nervous but excited when they drop into the depths of the cave, but things quickly start to go wrong. This is a horror movie, after all. After a cave-in separates them from the main cavern, the girls desperately seek an alternative exit as they delve deeper and deeper underground. 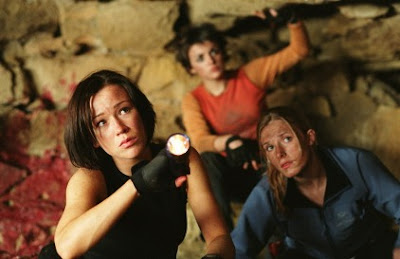 I think that one in the front is Beth. Or Becca. Or... screw it.

The movie is hard enough to watch as it is, with the girls crawling through tunnels scarcely wider than their skinny little bodies. Unfortunately, things go from bad to worse as it slowly dawns on the unlucky spelunkers that... They're Not Alone.

I won't give too much away except that the film starts losing it's sh!t at about the 50 minute mark and doesn't take a break. An early scene almost made me fall off the back of my bed, and at one point I even said "holy blap!" because I was too out of whack for real words.

Not only is it like a jackhammer to the spine, it is actually remarkably well composed. Very often, there are shots in which objects in the foreground are juxtaposed with objects in the background to shed meaning on both items in frame. Now, this isn't exactly a groundbreaking concept in film, but for a low budget horror picture, this is Citizen Kane level stuff we're talking about.

There is also a repeated motif about the loss of Sarah's child and it's hard to say more without giving things away, but suffice to say it does make you think, even if its primary goal is to electrify your nerve endings. The sets are stupendous, the darkness is oppressive, and the presence of an overarching theme is enough to launch the film into the upper stratosphere of 2000's horror.

The strength of the film lies in its all-female cast and their interactions shed light on the nature of women's friendships, the morality system of society at large, and just how much butt a single girl can kick. Regrettably, the girls do sometimes fall prey to Stupid Horror Movie Character-itis (for the love of God, stop shouting), but that can all be explained away by extreme claustrophobia, which as explained early on can cause panic attacks and... well, basically everything bad that has ever happened to anyone ever.

I am muzzled by my desire to have people go into this movie with no major preconceptions, but I will end this too short review by saying that I'm jumping on the bandwagon. I absolutely agree that this film is without a doubt one of the top ten of the 2000's, and almost definitely the best horror film of 2005. 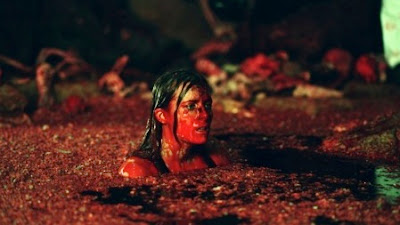 TL;DR: In spite of a lack of major characterization for half the cast, The Descent has quite a large amount of artistic merit and will flay the skin from your bones.
Rating: 9/10
Should I Spend Money on This DVD? Yes, please.
Word Count: 735
Reviews In This Series
The Descent (Marshall, 2005)
The Descent Part 2 (Harris, 2009)
Also sprach Brennan at 10:01 AM