Today is very special for all of us. Well, me and Shannon.  Tonight is the realization of a long-standing dream and a pillar of our friendship - tonight is our Bridgit Mendler concert. 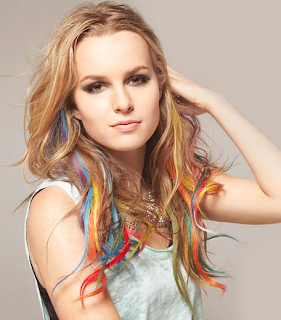 For those of you who don't know, Bridgit is the star of the Disney Channel Original Series Good Luck Charlie. But nobody cares about that because she has an ALBUM OUT. Yeah, that sounds mercenary and it is. Disney is a soul crushing money making machine. But Ms. Mendler is actually really talented in the cheesy pop field (in which I hold my B.A.).

We first heard her single "Ready or Not" in the Cinemark movie theater where we were watching Pitch Perfect with her sister, who was visiting. This is significant not only because she would fall in love with the movie, dragging me to it in the theater again the next week and generally being an enormous fangirl, but I would also later get a job at that very same theater (that I would subsequently quit but that is neither here nor there).

I later bought the single and then the whole album (it was on sale on iTunes and I had a gift card) and when we hung out over winter break, we listened to it and forged a bond. Bridgit Mendler has been an important part of our college experience and in our friendship, and that is why I am excited about going to a concert that will mostly be populated by twelve-year-old girls.

In honor of this day - and our friendship - here is

Demi isn't my favorite, but the girl's got pipes. She got her start on the Disney Channel in the TV movie Camp Rock and the series Sonny With a Chance. Although she had a brief struggle with addiction, a nervous breakdown, a stint in rehab, and a hiatus from acting, she climbed back on top, becoming a beloved judge on The X Factor and releasing an album of surprisingly solid pop hits.

This song was the official song of my breakup in 2012 because Hilary Duff is woman. Hear her roar. She made it big in Lizzie McGuire before moving on to other kid friendly films like A Cinderella Story, Raise Your Voice, and The Perfect Man. Lately she's been working in TV and indie films, but is mostly spending time with her husband, hockey player Mike Comrie and their one-year-old son.


Selena Gomez's breakout role was Alex Russo in Wizards of Waverly Place. Her tumultuous relationship with annoying teen superstar Justin Bieber raised her star even higher (You go girl. Use that douche for all he's worth!), and she's most recently embraced a more adult role in the 2013 comedy Spring Breakers. Her album When the Sun Goes Down proved that Gomez has a strong voice and could produce solid dance electropop with the best of them.

Bridgit is the most recently anointed Disney pop princess, but she has proved herself as something of a bubblegum savant. She is the only girl on this list to have received a writing credit on every single one of the songs on her album. So yes, this is another album by committee with Disney pulling the strings, but Bridgit had a personal hand in the making of each track, and it really shows. Her album Hello My Name Is... isn't necessarily an artistic triumph but it is a surprisingly mature and fun pop record.

My favorite anecdote: When writing her Cher Lloyd-channeling track "Hurricane," Bridgit and her producers were discussing the overall theme - that of an on-again off-again relationship and the problems it caused. As this conversation was going on, she was scribbling in her notepad and when the idea was finally solidified and they set out to write, she turned her pad around and said "How's this?"

She had written the first two verses of the song during their conversation.

So. It's not philosophical or deep. But she's really freaking good at it.


Let us never forget Britney Spears got her start on The Mickey Mouse Club. Disney is in her bones, and the fact that she has had a massive pop career does not change that. Britney was a superstar by the age of 17 and her career has spanned three decades. She's had two entire Glee episodes to herself!

Yes, she had a complete and utter meltdown in the mid-2000s but could you imagine being in her position? It's a credit to her that she lasted as long as she did. Anyway, she made a massive comeback and her most recent album Femme Fatale debuted at number one, she judged The X Factor alongside her sister-in-mickey-mouse-ears Demi Lovato, and her song is (inappropriately) featured in the new Smurfs movie. Unquestionably, it is the best thing about that film.
Word Count: 832
Also sprach Brennan at 8:05 AM