This is the second half of my award-winning first essay pairing from my Media Aesthetics class.

Prompt: Write a two page paper that identifies the theme and chronicles the arc of the lead character in one of your favorite narrative movies, act by act. 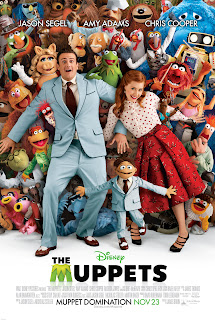 One of my favorite movies of all time is, no joke, 2011’s The Muppets, starring Jason Segel and Amy Adams. What made me fall in love with the film is that, despite being a saccharine sweet, squeaky-clean kids movie, it was simultaneously a well-constructed, very mature and thoughtful tale about the process of growing up and becoming your own person (not to mention that it was filled with loads of meta humor, for which I have an enormous soft spot). Underneath The Muppets’ broad strokes and bright colors are threads of tender and heartfelt explorations of the pitfalls and difficulties of the transition to adulthood that, when woven together, form a tapestry of subtext and elucidate the film’s main theme: Part of growing up is letting the people you care about do the same.

In Act One, Gary (born and raised in Smalltown, USA), Mary, his girlfriend of ten years, and his younger (Muppet) brother Walter discover that it is up to them to help the Muppets raise enough money to save their studio from a corrupt oil tycoon. Gary is wholeheartedly supportive of his little brother, even taking him on his and Mary’s anniversary trip to Los Angeles. He’s perpetually cheerful (in his own words “Everything is great, Everything is grand”) and perfectly comfortable to be living in complete stasis. He’s lived in the same town his entire life, he’s had the same gorgeous girl by his side in a pleasant, but completely undynamic relationship (it is implied that he and Mary have done little more than hold hands for the entire decade of their relationship), and he’s always lived with and taken care of his little brother.

In Act Two, the Muppets are preparing for their variety show with Walter and Gary leading the charge. Suddenly Gary’s worldview begins to change. The world is not immutable. There are many, many thousands of moving parts and he is only one of them. The world around him is constantly shifting – his classic heroes the Muppets are now forgotten relics of time gone by, and his simple ideas about what constitutes a happy relationship are being tested mightily. As he’s been throwing himself wholeheartedly into helping his little brother and the Muppets (without a second thought as to the implications of his generosity), Mary is feeling ignored and left out on her own anniversary trip. Gary is still trying to retain his childlike sense of altruism but the dirty, busy world of Los Angeles is pulling him in all directions, and he loses focus of his priorities due to his sense of duty to society in general.

All is lost when, on the night of the big performance, Mary abruptly takes a bus back home, forcing Gary to reflect upon his own actions and their implications. In the musical number “Man or Muppet,” he is torn between the love of his life, and his childlike attachment to the Muppets and his little brother, who is proving himself as an individual during his aid of the Muppets, but whom he still views as a small child who needs to be coddled and protected.

In Act Three, Gary returns home to prove to Mary that she is the most important person in his life and Walter blossoms as a performer completely without his brother’s help, saving the show and launching the Muppets’ popularity into the stratosphere. Gary has learned that by accepting his adult responsibility to his own life and saving his relationship with the woman he loves, he has allowed Walter to do the same, growing up and saving his true love – the Muppets.

Gary’s process of growing up was long-delayed and difficult but finally completed, culminating in his engagement. His character arc perfectly reflected the movie’s major theme. Moving on and allowing his brother to take control of his own life allowed both men to flourish as individuals. Without accepting his responsibilities of adulthood, Gary never would have succeeded in any of his goals, remained in a permanent state of stasis, and essentially ruined his love life, the careers of the Muppets, and the well being of his brother. This is a harsh truth that The Muppets relays with respect and subtlety, and that is why it’s one of my all-time favorites.
Word Count: 768