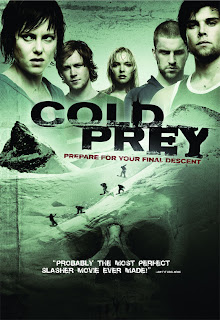 What is up with Norway, man? Since the beginning of history, the snowy land has had almost no significant presence in international pop culture but all of a sudden in the mid 2000's, they started producing absolutely stellar horror films out of nowhere. Dead Sno (Død Snø) is a terrific (Nazi) zombie film that got me into this neck of the woods and I have no intention of leaving anytime soon. Norwegian television must play old American horror films on a loop because this slasher films could compete with (and is better than most of) the big dogs.

Cold Prey (Fritt Vilt) is, when it comes right down to it, a fairly routine slasher movie. It doesn't try to put twists on the genre. It knows its place and its goal is to make us fall in love with the characters and enjoy the ride. I know watching characters you enjoy and identify with getting brutally murdered doesn't necessarily sound like a good time, but that's the key to horror. You need to care about the well being of these people or else you'll just end up rooting for the killer.

Yes, it's fun to watch Jason eviscerate a cadre of douchebags, but he hasn't been scary since Round One. You relate to these people and that makes you fear for them. And that's where Cold Prey does the genre well. 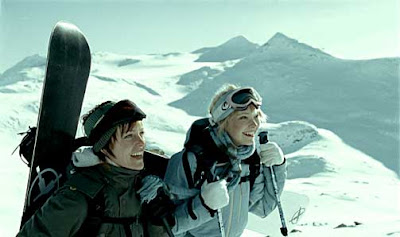 You care about them, even if they're dirty foreigners.

The movie begins and WHITE. As far as the eye can see. It seems that Norway has a lot of snow and director Roar Uthaug (who sounds like some sort of Bear King from a forgotten Disney film) utilizes this to his advantage, immediately oppressing the audience with a weighty mass of, well, nothing.

It is exactly this sort of nothing that our protagonists wander into, full steam ahead. It seems that Eirik (Tomas Alf Larsen) is somewhat of an adrenaline junkie (flashes of Descent here) and has taken his group of friends to go snowboarding in a remote mountain locale where no tourists will bother them. Or hear their cries for help.

In tow are his girlfriend Jannicke (Ingrid Bolsø Berdal, who was also in the abysmal Chernobyl Diaries but I love her anyway), their friends Morten Tobias (Rolf Kristian Larsen) and Mikal (Endre Marten Midtstigen) along with his girlfriend Ingunn (Viktoria Winge). That was fun to type, let's never do that again.

Anyway, Jannicke is afraid of commiting further to Eirik because she doesn't want them to grow bored of each other. Ingunn is a hot blonde who is head over heels for her beau but worries he just wants her for sex. Morten does just fine on his own, but gazes longingly at Jannicke when nobody is looking. We are allowed to explore these relationships for a good 40 minutes, and while they aren't necessarily more than stock situations, they are rooted in very human characters and it's a pleasure to watch them interact.

When one of their party is badly injured in a snowboarding accident, they hole up in a nearby building which looks eerily similar to the Stage 3 Dream from Inception, but upon closer inspection turns out to be an empty hotel. 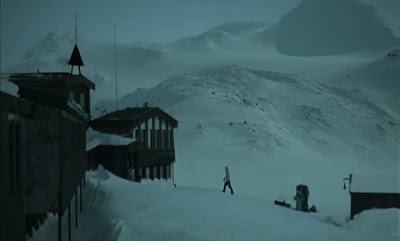 The five friends relax, drink, and apply emergency first aid. They make plans to send Eirik out for the car in the morning, but in the meantime they have this whole wonderful place to explore! Upon closer inspection, it turns out this hotel is more like a meat locker than an Embassy Suites. Long stainless steel hallways connect the rooms, lit by a row of flickering fluorescents. Wisely, most of them decide to sleep in the well-appointed lobby.

Mikal and Ingunn have a fight. Nobody wins. Mikal storms off. Ingunn and a mysterious masked mountain man have a fight. She loses. We all lose. The cleaning ladies who'll have to use some extra elbow grease to get the blood stains out of the floor lose. 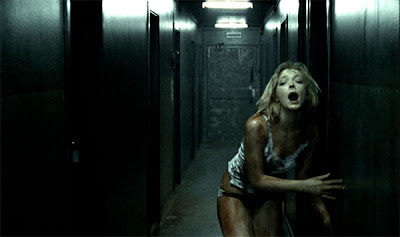 The killer begins to hunt them down one by one and they all learn the many wonders that can be achieved with a sturdy pickaxe.

The real kicker - and the most unique element of the film in terms of slasher tropes - is that it doesn't matter how they die. There is no array of edged weapons or hyper-creative Rube Goldbergian kill sequences. If they come against that pickaxe they will die, and Cold Prey uses that knowledge to ramp up the tension and produce a truly scary slasher film, which is no mean feat.

Accompanied by some truly inspired set design, a company of likable characters, and some just plain hair-raising, goosebump-having moments, Cold Prey is certainly a success and the high stakes ending setpiece is the cherry on top of a really terrible night on bald mountain.

Body Count: 4, and as always the slashers with the lowest body count tend to be the most terrifying.
TL;DR: Cold Prey operates within slasher parameters to create a stellar film populated with characters anyone can invest in.
Rating: 8/10
Should I Spend Money On This DVD? I wish more people liked slashers so I could definitively say yes. But yes. Please?
Word Count: 898