Reviewing Jane: It's Such A Happiness When Good People Get Together 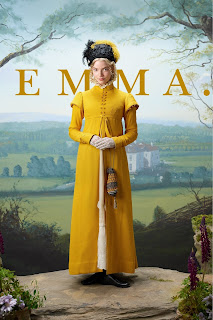 "Do we need another adaptation of Jane Austen's Emma?" cried the dozens of people who even heard this movie was coming out. Even though it's a title that hasn't really been dusted off this decade (even by the Austen-hungry Hallmark crew), I understand the perceived fatigue. The triple punch of adaptations that started with Amy Heckerling's Clueless, followed by Gwyneth Paltrow and Kate Beckinsale's turns at bat, sprinted across screens in a span of just 16 months between 1995 and 1996. That's a whole lot of Emma.

But Autumn de Wilde's Emma. has come along anyway, to prove that the answer to that question is a vigorous yes. 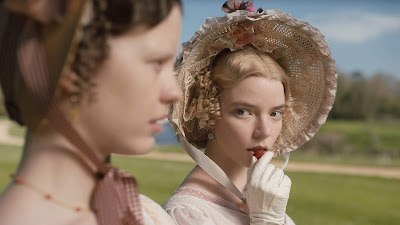 I didn't even need the movie to prove this to me, because the Gwyneth and Kate adaptations SUCKED, so we've never had a straight period adaptation of the story that's remotely worthwhile. But I respect Autumn De Wilde's flex regardless.

If you missed the 90's, here's the gist of the plot. Handsome, rich, and spoiled Emma Woodhouse (Anya Taylor-Joy) lives in luxurious solitude with her hypochondriac father (Bill Nighy). She strokes her ego by matchmaking her friends about town, and when a young rube of unknown birth named Harriet Smith (Mia Goth) she seizes upon the opportunity to make her into a fine young gentlewoman and foist her on any man that's around, blithely unaware that the men would generally rather eat dirt than marry her.

All throughout a variety of romantic misadventures that involve a revolving door of alabaster British character actors I can't be bothered to tell apart (sorry Callum Turner and Josh O'Connor), Emma is admonished by old family friend Mr. Knightley (Johnny Flynn), the only person who ever seems to find fault with her. Naturally they fall in love. 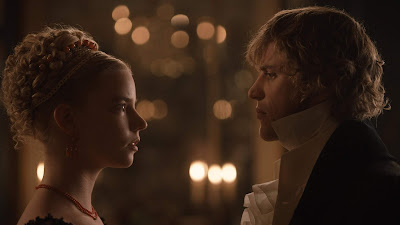 Trust me when I say that her marrying someone who literally held her as a baby is one of the least creepy romantic matches in the Jane Austen universe.

I have a lot of very nice things to say about Emma. but I should probably start with what you can tell from the screenshots I've already used. This movie is gorgeous, darling. Every second of this film looks like a watercolor that could be hung in a museum, with luscious pastels smeared across every flat surface, outfits, and even the sky. It's like an Easter candle melted all over Regency England's tablecloth. It takes the fussy diorama sets of your run-of-the-mill Masterpiece adaptations and pushes them to the extreme, filling every corner of the frame with delicately piled pastries, colorful gewgaws, and the like. 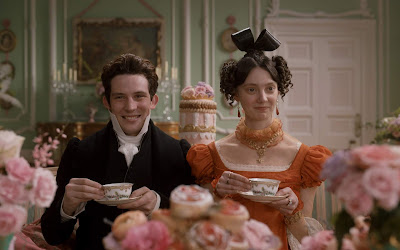 But all of this doesn't mean that Emma. is stiff and emotionally unavailable; far from it. The rigid grandeur of the sets serves as a vicious juxtaposition to the ridiculous antics of the rich fools contained within them. De Wilde and screenwriter Eleanor Catton have strung up a marvelous high wire act of tone here, delivering a sketch of messy humanity despite its extreme, almost cartoonish stylization. And in the process, they've captured Austen's tone better than any other period adaptation.  Her stories are emotionally resonant, sure, but the characters that populate them are daffy satirical caricatures of the upper classes.

These filmmakers get it, and I'm so thankful somebody finally has. They have stacked layers and layers upon the script here, bringing the novel to life perhaps even more than the novel itself was capable of. The first layer they start with is one I don't think I've ever seen in a period-set Austen adaptation: rich people fucking suck. They enforce a class system that limits the prospects of other people, just because they get to be at the top. They employ and ignore a veritable army of servants (this film, more than any other, depicts the sheer, overwhelming mass of staff required to make these people's lives possible). And they're used to getting everything they want, which is why it's so hard for Emma when the matches she tries to force keep falling through.

Starting in a place that acknowledges the fact that the characters (including the protagonist and her father) are grotesque and despicable allows for the film to mine the material for every ounce of acid-tongued, sour sarcasm it can produce. They aren't here to make Emma likable. That was the whole point of the novel: Austen set out to "take a heroine whom no one but myself will much like," because it's way more interesting to watch a heroine overcome a massive flaw and earn her true love rather than some pure, milquetoast waif suffering until she's rewarded with a handsome prince.

Embracing the black comedy is a hugely important decision in making this Emma work, and it pays off in the form of the funniest straight Austen adaptation by a long shot. The actors are all game, especially Nighy, Taylor-Joy (whose clipped haughtiness is best displayed in a scene you can see in the trailer, where she opens the window of her carriage to a tiresome neighbor with a languorous flick of a finger), and Miranda Hart as the aforementioned tiresome neighbor. Hart could easily have been a one-note cartoon character, and she still would have been terrifically entertaining. But later she gets to deliver a scene of so much heartbreaking pathos that it provides the fuel for the emotional climax of the entire two hour film. 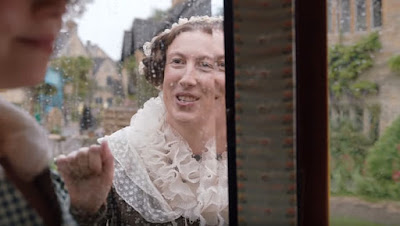 And now I finally have her name reinforced in my memory enough to stop calling her Friend from Spy!

Allowing the film to be funny and the characters to have foibles also does wonders in translating the humanity of these characters to modern day cinemagoers. These are not fossils locked in amber whose motivations and reactions can only be understood from a remove. They are messy, engaging, people who live and breathe and feel, whether they're frolicking around having fun with a pack of schoolgirls or wracked with weeping sobs over a year of terrible decisions. Even if you know nothing about the period, you know exactly what these people are feeling because they're allowed to be real.

This is well served by the film's choices about nudity and violence. Obviously it's very mild; they're not doing a gritty reboot here. But there are two scenes early on that display casual non-eroticized nudity and one scene involving a nosebleed in the climax that make the characters literally vulnerable. They're showing that underneath their endless layers of petticoats and gentility there still lies flesh, blood, and a beating heart.

One thing I especially love about the emotional capacity of this film is what it does with the character of Harriet. She's portrayed rightly as a suffering fool, but this is the first adaptation I've seen that fully allows her to be angry with Emma and the way she has toyed with her life like a bored cat. Even in the novel, Harriet's reaction to the final straw that severs their friendship is muted and elliptically delivered. But here, we get to sit in it and really dig into the chaos that Emma has sown among the people in her life.

OK before I yammer on even more: Yes, everything in this movie is good and you should go see it as soon as you get the chance. Literally the only thing preventing me from embracing this as the best Austen I've ever seen is my overfamiliarity with the material. So allow me a couple years to sit on this and revisit, and we can reconvene during our Best of the 2020's conversation.