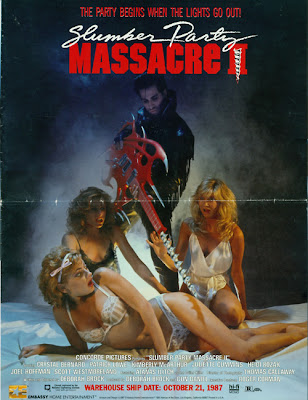 
What luck! The first slasher film I happened to watch in preparation for this blog was a prime example of post-Nightmare bizarro slasher surrealism.
Let’s start from the beginning: In 1982 the Roger Corman production The Slumber Party Massacre was one of the first slasher films ever to be directed by a woman, Amy Holden Jones. Also featuring a woman screenwriter (Rita Mae Brown), the script had a decidedly feminist bent, something almost unheard of in the notoriously misogynistic subgenre. On top of being a surprisingly good slasher film in its own right, the original film functioned as a feminist satire of the genre, with the killer using a massive phallic drill to murder his prey. The girls fight back, at one point cutting the drill in half, essentially castrating their murderer and saving the day.
So here we have this wonderful feminist satire that is just genuinely a good slasher movie, and they left it at that for quite a while. The slasher film was dying its first death by 1983 and there just wasn’t any money in it until A Nightmare on Elm Street exploded onto the scene, creating a wave of paranormal slasher cash-ins. This tight little flick held out for a while but eventually got caught in the slipstream of revenue and in 1987, the world was exposed to Slumber Party Massacre II.

Exposed is absolutely the right word for this film. Although plenty of topless girls were featured in the original, they were there for a satirical purpose. This film features an actual pillow fight (in which feathers get absolutely everywhere) in which, for no reason, one of the girls takes her top off. This movie is cheesy exploitation cinema at its finest, but it is disheartening coming on the heels of such a genuinely good film.
The film opens on Courtney Bates (Crystal Bernard), the youngest survivor of the first movie, in the middle of a nightmare about her big sister (who has been committed), portentious bloody images, and a mysterious shadowy madman with a drill. Undeterred, she goes to practice with her all-girl rock ‘n roll band and we get to Meet the Meat. Courtney is the lead guitarist, her best friend Amy (Kimberly McArthur) is on rhythm, Sally Burns, the slut (Heidi Kozak of Friday the 13th Part VII), is on drums, and Sheila Barrington (Juliette Cummins of Friday the 13th: Part V and Psycho III), the stuck-up rich girl, is the lead singer and bassist. Despite having such an exciting array of character traits, it is exceedingly hard to tell Amy and Sheila apart, and I’m still not 100 percent convinced that they are different people.
Courtney flirts with the handsome heartthrob Matt (Patrick Lowe, who looks every bit of 30 years old) and, about five seconds after kissing him, they are declared girlfriend and boyfriend. God, I miss the 80′s.
But, lo! The Slumber Party awaits! Mr. Barrington has just bought a new condo in Middle of Nowhere, USA and the girls all travel out to christen it (and invite their beaux along). The girls laugh, drink, dance and screw, but as the party goes on, Courtney is plagued by more and more nightmares that morph into bizarre hallucinatory daydreams.

We’re talking moments so absolutely loco they would give Freddy pause. We begin with a routine “bathtub filled with blood sequence” and charge right on into “eating a hand sandwich.” The only constant in her dreams is the cackling shadowy killer who flirts grotesquely with her and  - I can’t believe I’m writing this – is basically a cross between Freddy Krueger  and… Elvis Presley. Brandishing a guitar with a massive drill bit attached, he menaces Courtney despite being possibly the least scary figure in the history of film.
Although she is scared by her dreams, nothing actually happens and nobody is actually in danger until the 50 minute mark, when the killer shows up in the house for absolutely no comprehensible reason and begins mowing down her friends with his drill. He proceeds along merrily slicing and dicing and (urp) performing an entire rock ‘n roll number about his drill replete with pelvic thrusts, sliding down the bannister, and a “Buzz Buzz” refrain.
The movie abruptly ends 20 minutes later.
We get no explanation as to how this killer got into the house, how he exists, why he’s killing them, how he knows Courtney’s history, why he’s singing, or why his weapon is similar to the dead killer from the original movie. What we do get is a 71-minute exploitation film that not only rips pages from Nightmare‘s songbook, but chews them up, spits them out, draws on them in crayon, and has the audacity to name one of the characters “Officer Krueger.”
That is not to say this movie isn’t fun to watch. In fact, it is one of the most delightfully off-kilter movies in an increasingly inane subgenre. It makes not a lick of sense but it is brief, wacky, and features songs that I will never admit that I enjoy but one might find buried deep in my iTunes library. Also there’s a recurring motif with chickens that I, for the life of me, can’t decipher. The girls wave a rubber chicken out the window as they drive away, they eat chicken sandwiches, a dead dove (not a chicken but still) is given great symbolic close-ups twice to no avail, an evil chicken lives in the fridge, and the feather-filled pillow fight scene makes everyone involved look like poultry.
Make of that what you will.
Killer: The Driller Killer (Atanas Ilitch)
Final Girl: Courtney Bates (Crystal Bernard)
Best Kill: Sally is on one side of the wall, trying to live. Her friends are on the other, trying to use the phone to call 911. The drill pierces Sally, the wall, and the phone altogether, destroying everybody’s plans for the evening.
Sign of the Times: One of the girls asks a friend to get her a Slice. The whole rock ‘n roll thing. They all have that weird half Southern accent that everybody in 80′s movies had.
Weirdest Moment: A tie between two hallucinations – a massive zit making Sally’s head explode and a raw chicken leaping out of the fridge to attack Courtney.
Body Count: 6, all within a span of about 13 minutes.