Census Bloodbath: The Lunatic Is In The Hall 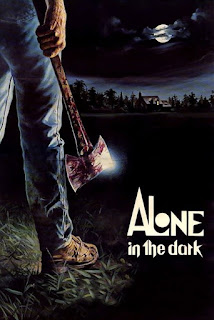 Up until now, I've been going through 1982 in pretty much chronological order, but I just had to skip ahead for two reasons: 1) I'm going to be speaking about this movie with the Keep Screaming podcast in about a month. 2) Alone in the Dark is the film on my remaining 1982 list that enjoys the loftiest reputation, so I seized onto it like a life raft, in a fit of desperation after a couple real stinkers. 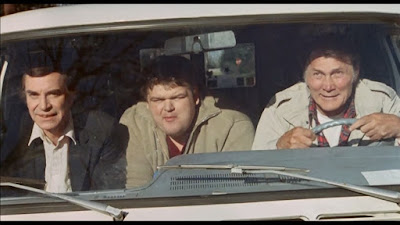 Time to see if I made the right decision.

Alone in the Dark is perhaps the most diffuse slasher we've ever covered because it focuses on no less than four different killers, the psychopaths who populate the third floor of an asylum in sleepy Springwood. New psychologist Dan Potter (Dwight Schultz) has moved into town with his wife Nell (Deborah Hedwall) and daughter Lyla (Elizabeth Ward), and are soon visited by his nuclear activist sister Toni (Lee Taylor-Allan), who is recovering from her own mental breakdown.

At work, Dan meets the psychopaths: Frank Hawkes (the Jack Palance), a veteran who is the de facto leader of the group; Preacher (the Martin Landau), a man who constantly lets loose a stream of religious fundamentalist babble; Fatty (Erland van Lidth), a child molester; and The Bleeder, who doesn't like to show his face (leading him to wear a pre-Friday the 13th hockey mask) but gets a nosebleed whenever he strangles his victims.

They are kept in bounds by an electric security system manned by the hippy dippy Dr. Leo Bain (Donald Pleasence), who thinks the world is the place that's crazy and the people under his care are "voyagers" into new spaces of the mind. Of course, there's a blackout and the killers are released. After a murder spree, they focus their sights on Dr. Potter, who they think has killed their former doctor, who just left for another job. 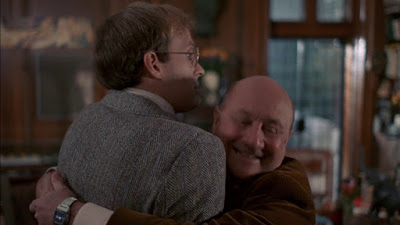 Donald Pleasence really needs to stop being hired to be in charge of mental patients, he really can NOT keep track of them.

Alone in the Dark is a curious beast. You've already seen the ways the structure breaks from the established slasher norm (and after the landmark year of 1981, which saw the release of literally dozens of theatrical slasher movies), and it breaks down even further when it becomes a home invasion/siege movie in the third act. But it was also the first film produced by a little distribution company known as New Line Cinema, which would eventually strike gold two years later with the release of an indie cheapie called A Nightmare on Elm Street.

An indie cheapie that would spawn a litany of sequels, the first of which was directed by Jack Sholder of... Alone in the Dark. Dude kept himself a job.

And while your mileage on Freddy's Revenge may vary, the opening scene of Alone in the Dark is more than enough to prove to me how he got the gig. It's a dream from Preacher's perspective that takes place in a generic small town diner which slowly devolves into surreality, from a frog hopping across the counter to rain suddenly pouring from the ceiling. It's an impeccably crafted scene that has nothing to do with the remainder of the movie, but that doesn't mean it's not effective as a little capsule of nightmare fuel. 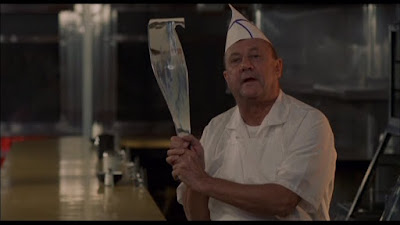 And I can't say I'm not grateful for this image.

I mostly get what Alone in the Dark is going for. It's attempting to show that Dr. Bain is right: the world we live in is crazy, and maybe those who society sees fit to put away aren't the ones we should be afraid of. The second the blackout occurs, the looting and rioting begins (this is apparently based on real incidents at the time as well), and the movie spends a lot of town fleshing out Toni's nuclear protest and the live wire rock 'n roll music that fuels her. Violence and chaos are everywhere in 1982, not just in the psychos behind the mask. But this is a slasher movies and they do need to chop up people, so they're really trying to have their cake and eat it too.

The place they're most successful is actually with the character Fatty, whose crimes are most irredeemable. However, his arc implies that he might actually be attempting to improve himself as a human being, and his inevitable eventual death is given the most heartbreaking coda.

So this is all interesting, if not particularly well-executed. Unfortunately the slasher movie elements are worth far less. The gore budget on this film is nil, so a lot of the bloodier kills are edited into ribbons, giving the vaguest impression of what is even happening. I know down below, my description for kill #3 sounds very confident, but I have about 10% clarity on what actually happened beyond a vague slashing motion and a gob of goo that represents a completely illegible mystery internal organ. 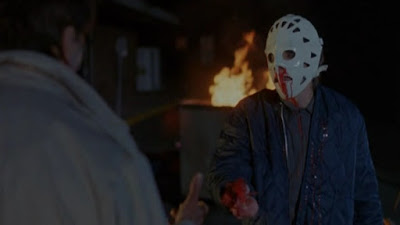 And Jason wore it better, too.

And this is all presented rather plainly. Beyond the first sequence, the only moment that shows any sense of flair is a shot of Toni slowly drifting across the room to close an open window while absolute hell breaks loose behind her in deep focus. Also, I'm not going to complain about a movie that gets such heavy-hitters to play its killers. Unfortuantely, they're poorly written personalities and aren't given enough screen time to really ham it up. Thus, the character that emerges as truly iconic is a horny teen neighbor mysteriously named Bunky (Carol Levy), who gives the bizarre snack-devouring girl in Death Valley a run for her money as my favorite Census Bloodbath babysitter.

The way it all shakes out, I think I liked this film. But I'm incredibly far from loving it. It's fun to see the trends in horror (and New Line specifically) it's predicting, but pretty much everything on display here would be perfected later in the cycle.

Killer: Frank Hawkes (Jack Palance), Preacher (Martin Landau), Fatty (Erland van Lidth), and The Bleeder
Final Girl: The whole Potter family
Sign of the Times: When Toni first shows up, she is dressed like Hello Kitty joined the Cobra Kai dojo.
Best Kill: I love when the lieutenant is attached to a tree via crossbow bolt to the gut, because it's one of the only truly good effects and also it's the moment that really launches the movie into high adrenaline mode until the credits roll.
Scariest Moment: Lyla is cornered by Fatty who starts trying to groom her while they're alone together in her house.
Weirdest Moment: The asylum's post-blackout roll call includes the names David and Lisa.
Champion Dialogue: "What are you, some kind of asshole?"
Body Count: 12; committed by a good half dozen characters.
TL;DR: Alone in the Dark does enough off-template stuff to distinguish itself, but it's not a particularly energetic slasher.
Rating: 6/10
Word Count: 1274
Also sprach Brennan at 1:05 PM No comments: