Part of Popcorn Culture's October festivities is a crossover feature with my friend Hunter over at Kinemalogue. He will be taking on three Census Bloodbath titles while I face three artifacts from one of his regular features - Cardboard Science, which explores science fiction B-movies from the 1950's. I've previously reviewed 1953's Invaders From Mars and his recent review of My Bloody Valentine is an excellent discussion of the socioeconomic themes of that film as well as its place in the slasher pantheon. 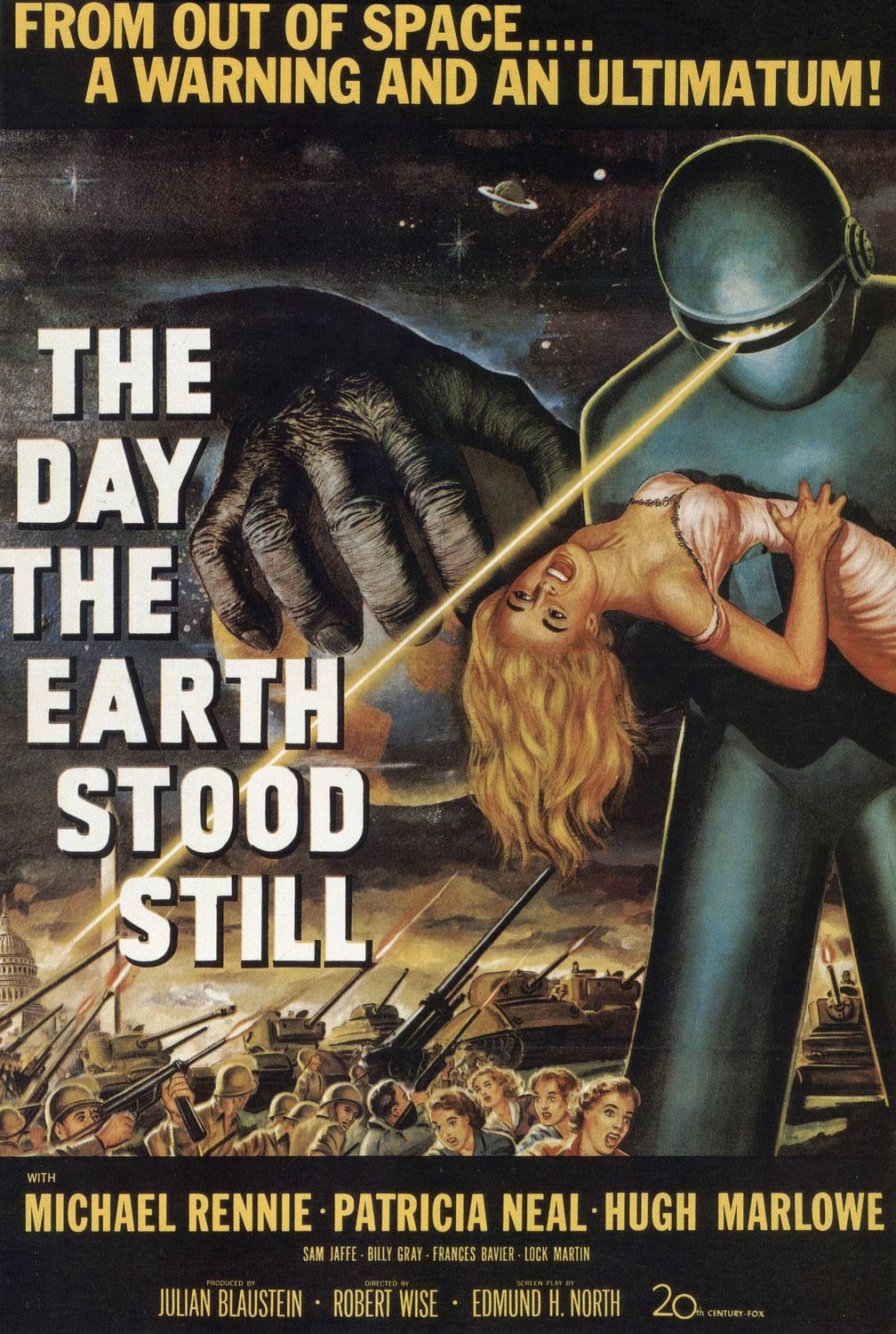 There is perhaps no better example of the thematic potential of the B-movie than The Day the Earth Stood Still. The beauty of these tricky little films was that, since they were low-budget romps tossed-off on the back of a studio film to rake in a tidy profit, producers kinda didn't care about them. This allowed the filmmakers to pour all sorts of ire about the state of society (and in the 1950's what a society it was - rigid suburban families ignoring the plight of the urban folk, the imminent threat of nuclear disaster - it was a hoot and a half) into the subtext of surface-level tales about robots and ray guns and flying saucers.

We'll discuss the specific details of The Day the Earth Stood Still and its deeper meanings a little later in this review, but the sheer scope of this film's marriage of political sociology and science fiction tropes is nearly unparalleled and worth mentioning at every salient point of an analytical discussion. 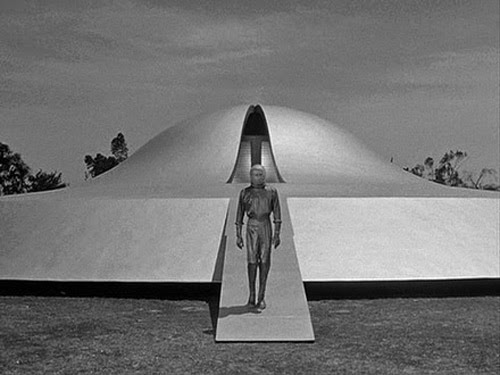 One of the best things about the plot of The Day the Earth Stood Still is that it starts right away, no frills. After the opening sequence, an Unidentified Flying Object lands on the National Mall in Washington, D. C. And by the ten-minute mark, a robot is already disintegrating tanks with his laser vision. Talk about hitting the ground running!

After a bit, the film settles down into a more domestic plot that, while significantly less exciting, never ceases to entertain. Klaatu (Michael Rennie) is an alien visitor seeking to spread a message from his peaceful culture to all nations of the Earth. When the American Secretary deems this impossible, Klaatu escapes the hospital where he's being held and takes up residence in a nearby boarding house while the authorities are on the hunt for him.

Luckily for Klaatu he speaks English and looks exactly like Michael Rennie so he can blend in no problem. Through two neighbors - obligatory golly gosh gee whiz young boy Bobby (Billy Gray) and his single mother Helen (Patricia Neal) - he learns about the good side of humanity while the government and the military hasten to provide a counterargument. 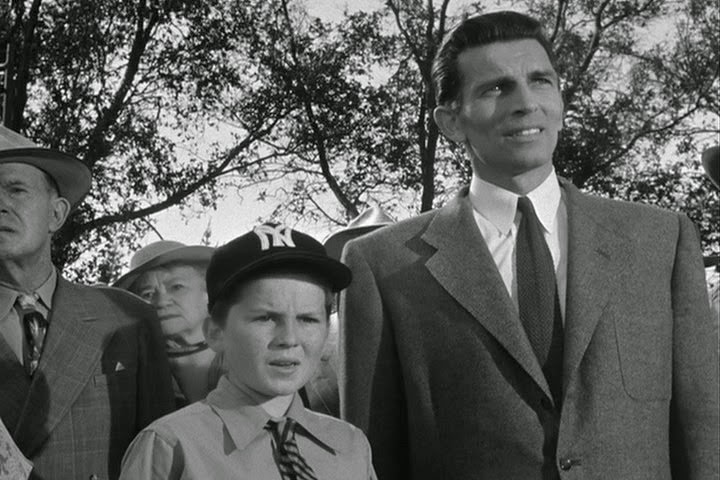 Behold! The most hideous, vile alien creature to visit Earth! Pictured here with his friend Klaatu.

All this is pretty bog-standard material for films of this pedigree. The special effects likewise don't quite lift The Day the Earth Stood Still above and beyond its peers: Klaatu's robot pal Gort (Lock Martin, who not only wasn't a robot, he wasn't even an actor - he was just a conspicuously tall doorman at Grauman's Chinese Theater and if that's not the most Hollywood thing you've ever heard, please stop watching TMZ) looks rather wrinkled at the kneecaps and the spaceship itself looks culled from the papier mâché department of the 99 Cent Store.

But trust me, we're not here to mock the film. Special effects were not what they are now and the budgets for these things could hardly buy you a pack of crackers after inflation, so the craftsmanship is actually quite admirable given the circumstances (especially notable is the seamless way the ship's ramp emerges from its smooth side). And they must have blown quite a bit of their cash on a series of shots that depict the UFO's impact around the world, which gives the film a vitally necessary sense of scope it couldn't possibly have achieved otherwise. 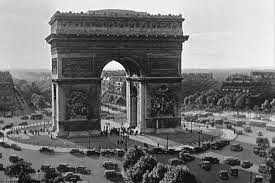 But all of these trappings and pomp and circumstance serve a marvelous purpose, underscoring the film's major thematic through line that manages to be powerfully bold without tipping into the "annoyingly preachy" zone. There is an obvious Christ metaphor that runs along the whole thing (Klaatu preaches a message of peace, is destroyed by the people he seeks to save, and is resurrected to spread his final words), but even that plays second fiddle to the throbbing heart of the film's politics.

The Day the Earth Stood Still denounces the violence and warmongering of human society - America included, in an audacious furor perhaps unmatched by any film released under the Hays Code (a startlingly strict censorship code that applied to all movies between the 30's and the 50's - read more here.). Klaatu denounces American culture's reliance on violence and their substitution of fear for reason. When he approaches them seeking peace, their only response is to strike him down merely because they don't understand him.

This film is driven a powerful, timeless message that applies even in today's world. Xenophobia in America reached a peak following the events of September 11th, 2001, and we as a culture continue to tamp down on any coalition that seeks to advance the welfare of those who are different than the "average." Fear continues to fuel the workings of society and, according to Klaatu and his BFF Gort (who actually is kind of terrifying, the void behind his visor when he prepares to shoot his laser blasts is chilling to the bone), this will lead to our downfall. If we're not destroyed by ourselves, we'll surely be eliminated by someone else in self-defense.

Although political themes weren't at all uncommon in B-movies like this, it's utterly rare to find a film so fundamentally impactful that it rings true throughout the ages and provides enough food for thought to feed a family of four. My numerical rating of The Day the Earth Stood Still is but a matter of personal and aesthetic taste as a filmgoer, but the message that lives on through it is undeniably important and skillfully honed.