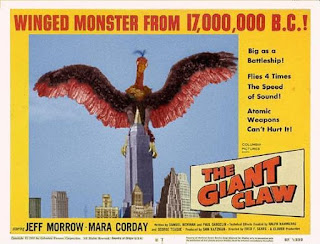 This October, we’re bringing the past to life. As I’ve now reached the halfway point in my Halloween marathon, it’s time to bring back another tradition from our ‘Ween season spectacular: Cardboard Science! That’s right, it’s our second annual crossover with BFF (Blog Friend Forever) Hunter Allen over at Kinemalogue! He’ll be taking on three choice treats from my Census Bloodbath gallery of terrors and I’ve been assigned three tricks from his favored genre: 50’s sci-fi.

Obviously, I’m not quite as well equipped to discuss this genre in a cinematically historical context. My understanding of 50’s B-movies begins and ends at The Blob. But I’m greatly looking forward to taking on this challenge of exploring a new genre. I hope you are too!

Last year, I left you off with the insipid Invaders from Mars, the pedantic but engaging The Day the Earth Stood Still, and the secretly pretty cool Them!. It’s time to dig a little deeper, starting with our first film: The Giant Claw. 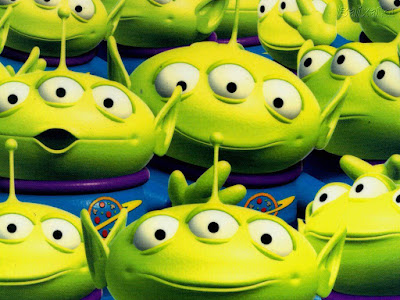 First off, that title is a bit of a misnomer. There’s definitely more claws than they’ve been letting on, and they’re attached to a bird the size of a battleship. When electronics engineer Mitch MacAfee (Jeff Morrow) is test piloting a plane for the military, he spots this brobdingnagian buzzard out of the corner of his eye. In no time, planes start disappearing all over North American (including Canada, marking what must be the first time our northerly neighbors were ever mentioned in a Hollywood film – history comes alive!).

It’s up to Mitch and mathematician turned girlfriend Sally (Mara Corday) to discover the truth behind the giant fowl and help the Good Old Boys of the army discover how to stop it. They’re accepted with open arms because there’s nothing the military likes more than letting plucky civilians have access to top secret equipment and intelligence. Of course, the job gets more challenging as the bird widens its range, attacking all the important world cities that white people care about and they discoverer that the beast is surrounded by an impenetrable force field of antimatter. 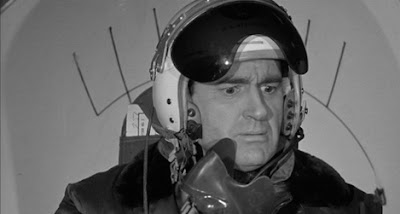 For an epically corny giant monster movie that doesn’t even have the decency to be an allegory for nuclear woes. The Giant Claw actually starts off pretty strong. It’s a pretty typical first act, but “generic done well” is still a surprising stroke of quality for a film of his caliber. The strong-jawed hero with a belt around his ribs in a futile attempt to give him a barrel chest, the beautiful and smart heroine, the slow burn before the bird’s reveal… It’s all there.

The really startling thing is the dialogue, which is just genuinely fun. Sally and Mitch’s sly flirting incorporates a good half dozen baseball metaphors, and they approach every scenario – no matter how intimidating – with wry, clever banter. A personal favorite comes when Mitch is urgently called to the general’s office and he answers the door in his bathrobe: “You keep your shirt on and I’ll get my pants on.” Ibsen it ain’t, but it’s highly amusing and far more intelligent than one could reasonably expect from a flick called The Giant Claw. 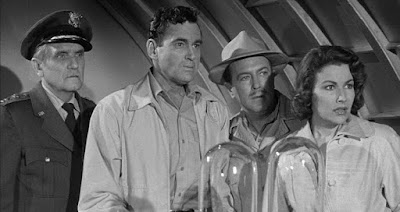 Somebody call Aaron Sorkin and let’s get a remake going.

So here we have clever characters barreling through a variety of aerial antics, including an airplane crash that’s edited using every trick in the book to make it only minimally cheesy, like a quick dash of parmesan. These engaging archetypes are attempting to solve the mystery of the Unidentified Flying Object and discover that it’s attacking in a spiral pattern, a nice touch that shows off their skill and aptitude. The film starts rockin’ and rollin’, but it rocks a little too hard and rolls onto its back, where it gets stuck.

About midway through the film, all those nice setups (the blossoming romance, the spiral theory, any subtextual potential) scatter like cockroaches when a light is turned on. Where once it was a slightly eerie giant monster flick, the film abruptly converts into a hard science extravaganza of macho insipidity. The discovery of the bird’s flight pattern is never utilized, in favor of blundering after it with big-ass guns while a scientist provides an absurdly detailed lecture about the nature of antimatter and serosorted quarks or whatever. Look, it’s not like I took notes. This flick had the budget of a sewer rat, it’s not like they could have consulted with Stephen Hawking to keep the science accurate.

The question that arises is this: Does the giant bird really need to have an antimatter force field to avoid radar and repel missiles? It’s already an evil space bird. Can’t it just be really strong or something? It smacks of pandering to the popular science of the day, and the intense focus on educating the viewer smashes the characters into oblivion, converting them into soulless flesh lumps that nod and go “Oh, how interesting.” Then they build a Science is Magic weapon so they can go shoot more rockets at a bird. Whee.

It’s a primitive, almost vulgar approach to the conclusion of a story that began with such relative elegance. The finale is such an anticlimax that it dominates my negative responses to this movie even more than the hideous puppet that plays the bird. 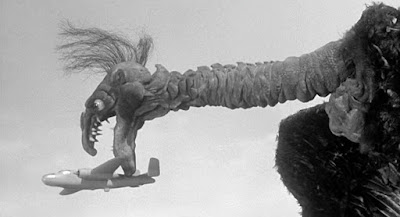 Yup, this is the abomination summoned to terrify the masses. I’ve seen my share of shoddy special effects, but the work here is just mortifying. There’s a couple decent moment overall, including a crumbling building and a wounded pilot with an alarming amount of blood for the 1957 crowd (this was before Psycho, remember, the musty charms of which were the goriest thing American audiences ever bore witness to at the time). But that outsized chicken is past redemption. It looks like one of those hand turkeys that kindergarteners trace pm Thanksgiving, and its stiff beak never once matches up with the forlorn cacophony of caws on the soundtrack.

Luckily, the bird does provide some of that crappy B-move sparkle. The Giant Claw doesn’t have too much in the way of camp (it’s way too enthusiastic about didacticism for that), but between the bird and a chirpy narrator espousing the community values of the 1950’s, there’s enough to go on for cinematic dumpster divers (my favorite moment is when the disembodied voiceover seems to get actively frustrated at Mitch’s failures to create a machine, a touch very reminiscent of Arrested Development). And let us never forget that, for about fifty percent of the time, the film is actually kind of a good movie. Unfortunately, the sum of its parts is far lesser than the whole, but as it stands, The Giant Claw is a totally passable, mildly amusing diversion. 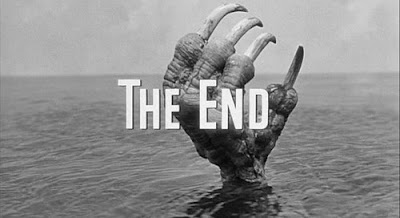