Well, this is awkward, isn’t it? As I got busier and my free time drifted away into the mist, I’ve at least been able to keep up a reasonably steady diet of movie watching and reviewing. However, several ongoing features are begging for completion, and I still haven’t rectified my unforgivable sin of leaving October’s Cardboard Science feature on a cliffhanger. However, as my health, my finances, and my schedule begin to level out, I shall once more give a grasping attempt to catch up with myself, starting with the resurrection of my most popular feature (in polls conducted on me’s everywhere): Census Bloodbath. 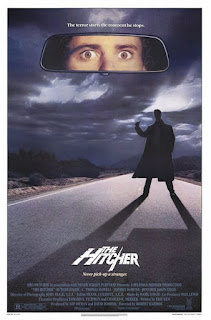 1986 was a weird year for slasher movies. They had already died their first death following the video boom of the early 80’s, been resurrected by Wes Craven’s 1984 masterpiece A Nightmare on Elm Street, and had a brief supernatural vogue before dwindling once more, more or less immediately. 1986 catches the tail end of that second cycle, in the period of the decade where the perms were at their biggest and the legs at their warmest. This was the age where the slashers were really flexing their muscles to try and rise above the rest of the pack. Seeing that the year bore three separate slashers that took place on April Fool’s Day, I wouldn’t say this was entirely successful.

However, 1986 also saw the release of a different beast that accomplished that separation effortlessly, using the by now well-known slasher idiom to create an entirely different horror tale, hybridizing the subgenre with the popcorn action-thriller antics that were spreading across cinemaplexes like a virus: This movie was known only as… The Hitcher. Now, The Hitcher wouldn’t be the first quasi-slasher to take on Duel-esque roadside thrills (the 1981 gem Road Games beat it to the punch), but it’s certainly one of the more successful action slashers in the business. 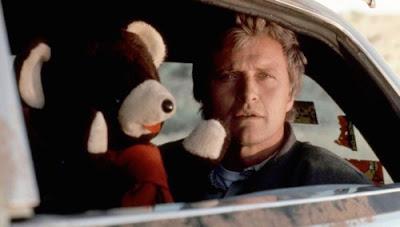 I mean, it’s no Terminator, but what is?

In The Hitcher, Jim Halsey (C. Thomas Howell) is a young Chicago native taking a driveaway car to San Diego, where he intends to start a new life. Maybe. The Hitcher isn’t exactly a repository of character details, but then again what 80’s horror or action film really is? At any rate, he’s driving along the dark Texas highways and decides to pick up a hitchhiker to keep him awake.

He certainly made the right choice, because after picking up John Rider (Rutger Hauer), he may never sleep again. The hitcher turns out to be a vicious roadside serial killer and Jim narrowly escapes with his life. But he’s hardly in the clear – thus begins a dangerous game of cat and mouse as the Hitcher torments Jim along his journey, framing the boy for a series of grisly murders. It’s up to Jim and roadside diner waitress Nash (Jennifer Jason Leigh, making her second Census Bloodbath appearance after Eyes of a Stranger) to prove his increasingly dubious innocence.

And if having great hair is a crime, he’s certainly not innocent.

The Hitcher starts off with a bang, plunging us almost immediately into gut-wrenching thrills. Hell, this is a movie where a toddler gets murdered in the first twenty minutes. It might be offscreen, but it doesn’t pull any punches when setting up our pal Hitch as a Bad, Bad Dude. He is evil incarnate, and though he might never vanish into thin air or otherwise show any signs of supernatural hijinks, it wouldn’t take much arguing to convince me that he’s the actual Devil. And the film opens with his most solid, sustained presence: a solid 10 minutes of torment that makes the skin crawl.

Whether you respond to Jim’s hopeless predicament, the stiletto-sharp screenwriting, the enclosed space, or Hauer’s uncomfortably serene performance, there is something in this scene to make you rethink ever getting in your car again. It’s the single strongest moment in the film, clocking you in the jaw before the plot even has time to warm up.

Now, that means the rest of the movie can never quite live up to this moment, but it sure as hell tries. Hauer’s inscrutable menace propels the tension whenever he reappears, and the increasing desperation of Jim’s situation means that the pace never really flags, but the increased focus on Jim and Nash allows some flab to creep in.

Slowly and subtly, like the fourth week of a diet plan.

C. Thomas Howell’s performance is just a wee tad cheesier than my taste, so spending any alone time with him is like putting on a Paul McCartney solo record. You don’t hate it, but you wish the other guys were still around. Plus, his lack of character depth doesn’t lend as much to the story as The Hitcher’s. An unknowable villain is scary. An unknowable protagonist is just frustrating. Jim’s blankness lends to its general urban legend-y air, but once the movie ditches nail-biting, close-up horror for bullets and car chases, there’s no way to get purchase on his character, making it a chore to even pretend to care about his fate.

Oh yeah, did I mention how many car chases there are in The Hitcher? I already said it was an action-thriller hybrid, but the sheer amount of car chasing, car crashing, bullet ricocheting mayhem here comes totally out of left field. The second a freaking helicopter comes hurtling onscreen, the 80’s have fully asserted themselves on the film, and my estimated budget shoots off the charts. The fact that this level of action is present at all in a slasher is pretty unprecedented, which certainly makes the film an intriguing curio, but the repetitive, over-the-top nature of these scenes causes the film to stall quite a bit during its second act, sputtering and coughing exhaust before it hits the right gear with its gonzo finale.

But oh, what a finale! Although the film’s gore level never hits a lofty peak (most kills are offscreen, and the ones that aren’t are pretty tame – even by 1986’s downright Puritanical standards), its viciousness returns with gale force. It exits the way it came in, leaving a wicked taste on the tongue that won’t quite scrub out.

I suppose that I should mention the artistry of certain moments: the slanted shafts of light cutting through the frame, the elegant photography of the dusty terrain (as should be expected from DP John Seale, who later shot Mad Max: F**king Fury Road), the lone dog walking through the empty police station, turning the scene into a waking, Craven-esque nightmare… but more than its generally being well put-together, The Hitcher leaves you with a sense of being genuinely unsafe, something totally unique in the realm of 1980’s slasher cinema. It’s a wonky entry in the genre, to be sure, but a lasting one.

Sign of the Times: Listen to thirty seconds of this nonsense.

Scariest Moment: The Hitcher tells Jim he'll leave him alone if he says four words: "I want to die."
Weirdest Moment: Jim is eating french fries, but one of them turns out to be a finger.
Champion Dialogue: "Actually we're all from Mars around here, we keep our spaceship out back."
Body Count: 13; not including a potential truck passenger that may have been briefly glimpsed in a sandstorm, as well as five squad cars and one helicopter that crash, presumably killing their occupants.
TL;DR: The Hitcher is a gritty slasher action-thriller, and that's the least of its charms.
Rating: 7/10
Word Count: 1367
Also sprach Brennan at 10:21 AM