Yo Ho Ho And A Bottle Of Dumb 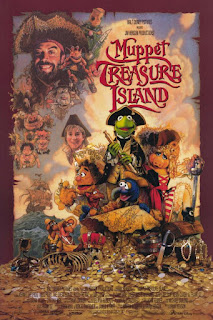 Following Jim Henson’s death in 1990, the Muppet franchise was set adrift on a choppy tide. The first theatrical feature since that dreadful day was The Muppet Christmas Carol, a mildly entertaining literary adaptation that sidelined the Muppets. It didn’t do half bad at the box office, and considering that this was during the early period of Disney’s flirtation with the property, the soul-crushing corporation squeezed that felt to see if they could get even more blood to drip out. Thus, Muppet Treasure Island was born, made on the exact same model but proving to be ever so much worse. 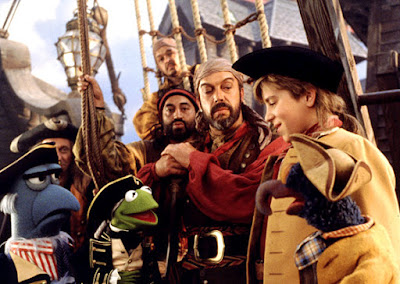 The plot, obviously, is pretty much just Treasure Island with a few (too few) Muppety spins on the seafaring tale. Jim Hawkins (Kevin Bishop), Rizzo the Rat (Steve Whitmire), and Gonzo (Dave Goelz) live sad, lonely lives as servants at an inn when a dying patron leaves them with a treasure map. Seeking adventure on the high seas, they set sail with the wealthy but spacey Squire Trelawny [Fozzie Bear (Frank Oz)] and Captain Smollett [Kermit the Frog (Steve Whitmire)]. When the treacherous Long John Silver (Tim Curry) steals the map and kidnaps Jim, they must journey to the island where the treasure is buried to save Jim and stop Silver and his band of pirates. 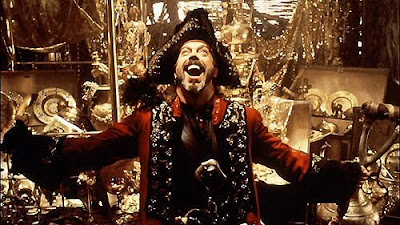 This was back in the day when pirates did cool swashbuckling things instead of just torrenting Expendables movies.

Hey, remember when I had a severe problem with The Muppet Christmas Carol shunting the A-list Muppets into tertiary roles? Well, Muppet Treasure Island is a vast improvement. The A-list Muppets are shunted into secondary roles this time. Progress! Once again, the dream team (by somebody’s definition) of Gonzo and Rizzo take the remaining leads and prove for the second time that they don’t have the capacity to drive a Muppet feature all on their own. It’s not like I have a problem with Tim Curry (or the previous venture’s Michael Caine, for that matter), but human performances are light years less compelling than the alchemic magic that brings the Muppets to life. And as for Kevin Bishop? Oh, we’ll get to him later.

Muppet humor generally thrives on postmodern meta winks and nudge, but there’s a very crucial limit to their self-referentiality. As much as they will admit that they’re putting on a show or making a movie, the Muppets will never ever make reference to the fact that they are puppets. Because they aren’t. They are living, breathing creatures that play characters and put on shows for your amusement. The idea that the Muppets are a fictional construct rubs against the very grain of the magical material. That’s why the opening credits read “Kermit the Frog as Captain Smollett” and poor Steve Whitmire is relegated to the closing crawl.

Muppet Treasure Island doesn’t violate this rule, thank Henson, but with Disney pulling the strings they come knife-edge close. The Big Mouse is so proud of its acquisition that it can’t help but drop a couple anachronistic references to itself in the script. Oops, did I say “drop?”? I meant “propel at cannonball force, reducing the script to tatters.” Such obvious, clunky homage to the company is a vulgar challenge to the purity of the Muppet universe. It’s not like kids will notice, but if we’ve learned anything about me during these past few months, it’s that I take my Muppets very seriously. 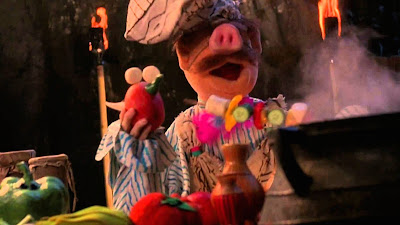 Swedish Chef and Jason Voorhees. It’s a good thing I’m already dating someone, because my profile would melt Match.com’s servers.

But my intense analytical ranting is far from the only issue with Muppet Treasure Island’s humor. It runs into the typical 90’s Muppet pitfalls, favoring cheap slapstick, crappy pop culture references, and sanitized kiddy gags over the anarchist family humor of previous entries. Frankly, it’s not funny. And the weak adaptation of Robert Louis Stevenson’s source novel is hardly compelling enough to compensate for this titanic deficiency. Because of this, Muppet Treasure Island is unequivocally the worst Muppet film, though as a member of that particular class, it is saved from being a particularly abhorrent example of family filmmaking.

Plus, as much as I abhor humans stealing lead roles from Muppets, Tim Curry really is pretty phenomenal. As a fan of The Rocky Horror Picture Show, it’s a delight to see him back in a musical, even if he only taps about half of that gonzo Dr. Frank-N-Furter charisma. Kevin Bishop, on the other hand… (See? I told you we’d get back to him.) As a child actor in the 1990’s, he just plain wasn’t going to be good. Nobody seemed to pay much attention to the direction of young actors back then, and he’s just one of dozens who got lost in the shuffle. Look, if Jurassic Park couldn’t do it, Muppet Treasure Island was just not going to stack up.

The truly disastrous element of his hammy, exaggerate performance is his singing voice, which really couldn’t be helped. As kids of a certain age are wont to do, Bishop underwent puberty during the course of the film’s production, forcing sound engineers to use early demo recording of his songs. The result is an overly filtered, Paris Hilton-esque whine that exists in a sonic universe that is light years away from the rest of the cast. It’s distracting, sometimes ear-splitting, and the songs weren’t really that good in the first place. No offense to the arbitrary calypso free-for-all number Cabin Fever,” but there’s nothing here that’s worthy of licking the boots of “Rainbow Connection” or “I’m Going to Go Back There Someday.” 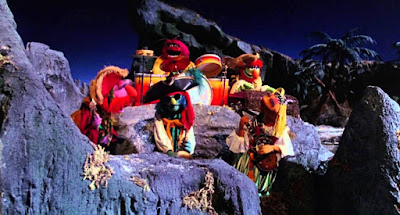 Hell, it even makes me kind of miss Electric Mayhem.

Muppet Treasure Island was the nadir of this marathon, so thankfully things are uphill from here. Disney would drop the property before picking it up for good and finally deciding what the hell to do with it. And the 90’s were well on their way to folding into the culture of the new millennium. Good riddance.