A Is For Asia

I've been spending pretty much every single second of my time preparing and shooting my short film, iMadman, which I hope I get a chance to edit a little bit today. But unfortunately due to the extremely time-consuming nature of the film business, I haven't been updating my blog as often as I'd like to. But I'm attempting to rectify that by participating in the Blogging From A to Z Challenge.

This is a massive collective blogging challenge that I've been looking forward to since I started this dang thing. The whole point is to post one new post a day, each with a theme corresponding to the next letter of the alphabet. Basically, the content and my reviews won't change, but the blog structure and (hopefully) the posting frequency will. At least for the month of April.

The challenge organizers have decided that each blogger should post one post every day of the month except Sundays (to get to 26 days). But, as I am a Godless man and an extremely busy Godless man on Saturdays, I will be taking those days off instead.

Assuming I get that far. Wish me luck!

My first post for this marvelous occasion shall be a continuation of one of my premiere blog series!

I spent a long time putting together a presentation about my short film and in order to properly represent its themes, I had to compile a ton of clips of horror movies that used telephones. This reignited my intense need to watch Japanese movies so I drafted Sergio into the J-Horrorthon once more. It's like summer all over again! 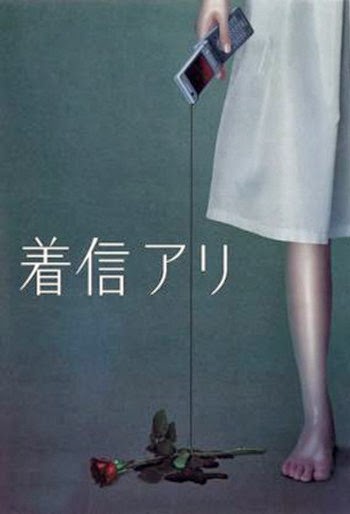 College students start receiving mysterious voicemail messages from themselves at the moment they die.

Having more or less completed the Ring and Grudge series minus a couple B-sides that I'll catch up on when they become available, it was only natural that I should hit the other major J-Horror franchise to make it across the Pacific (I'm pretending Dark Water never happened).  The American remake of Chakushin Ari, One Missed Call, never really caught on, but it was one of the more successful late 2000's remakes during the death throes of the genre.

Anecdote: It was huge in my junior high school. People were all using that darn ringtone, sending it to each other with their newfangled bluetooth devices.

But I digress. We'll have ample time to discuss that train wreck a couple paragraphs further down. Chakusin Ari is another entry in the "cursed technology" genre by prominent J-Horror director Takashi Miike (who revolted audiences everywhere with Audition in 1999) and while it's certainly not the best of them (that, for my purposes, would be a tie between Ju-On 2 and Ringu 2), it really packs a wallop when it wants to.

The great thing about Japanese horror films is their subtlety. Sure, they could throw shrieking pale ghosts at the camera and call it a day, but what they choose to do instead is so much more impactful in its minimalism. A snakelike pale arm snaking around a human body when it patently shouldn't be there is certainly no jump scare, but it'll send chills so far down your spine that your couch gets nervous.

Anyway, Chakushin Ari is about Yumi Nakamura (Ko Shibasaki), a young woman who watches her friends fall one by one to a curse in which their phone plays a creepy ringtone and they get a message from themselves in the future saying exactly what they're going to say before their untimely demise, at which point the curse is passed on to somebody in their phone book. It's a convoluted mythology but it makes enough sense when you're watching it.

As she struggles to uncover the mystery, her friends fall one by one until she herself gets the fateful call. The clock is ticking as she nears the source of the curse. Once again, much like The Ring and The Grudge, the key to unlocking the mystery lies in a twisted family secret and an angry ghost with stringy black hair.

So perhaps not the most original plot line of them all, but the concept is fun, the ringtone is a great creepy motif that wraps you up like a boa constrictor, and the main plot wraps up fairly quickly, leaving a good half an hour at the end free to be filled with batsh*t insane Japanese nightmare fuel.

The ending is nonsensical and the second act is a deathly dull procedural, but the scare sequences are still enough to make me shut my closet door at night and the convoluted mythology (involving child abuse lectures, candy, and cell phone plans) pretty much all comes together in the end.

I'm only grading it down for the sheer length, because to tell you the truth there's very few things more terrifying than a Japanese ghost thriller bringing its A game. I'd suggest it to anybody who enjoyed the Ring and Grudge movies and are looking for a new outlet for surreal terror. Also the cheerful pop song that plays over the closing credits is a stroke of genius. 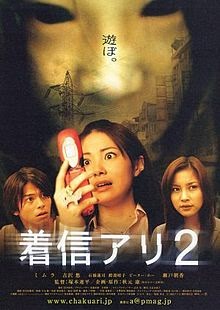 The cell phone curse lives, only this time it's way more confusing.

Evidently the producers of this two-years-later sequel looked at Chakushin Ari and decided that what was missing was more of the boring middle half. It's a real shame because although the One Missed Call series never really hit it as big in America or Japan as some of its counterparts, the premise had some really incredible potential.

The original film explored the concepts of child abuse, its effect on the kids and their psychology, and the idea that domestic violence never truly ends but merely creates a vicious circle that drags everybody down with it. And Chakushin Ari 2 introduced a new mystery regarding the evils inside ourselves and the dangers of a strictly traditional culture misunderstanding a child's talents.

Too bad it spent far too much time on Takako (Asaka Seto), the intrepid reporter with a haunted past being followed by an utterly unalarming little girl ghost and always turning around just in time for her to vanish. It's shallow, repetitive, and unremittingly dull, only briefly letting up about twenty minutes before the end for some pretty cool mystery solving sequences.

Unfortunately the entire film is utterly devoid of horror, perhaps because it can never truly hide the fact that it is a staged fiction due to what I imagine were incredibly draconian budget restraints. To prove this point, they reuse one of the most jarring and physical scare moments from the first film in a manner that entirely strips it of its dignity and renders the whole thing a pale mess.

The film attempts to deepen the curse, further the mystery, and explore the consequences of the world the first film created. It did not. The rules surrounding the ghost's behavior vanish completely (the main girl, Kyoko (Mimura) gets approximately three missed calls, none of which seem to harm her), we don't even see the most important evidence in the detective's case, and why the hell do these people never answer their phones?

Chakushin Ari 2 is a boring, blah waste of time that makes me miss even the dullest moments of its predecessor.