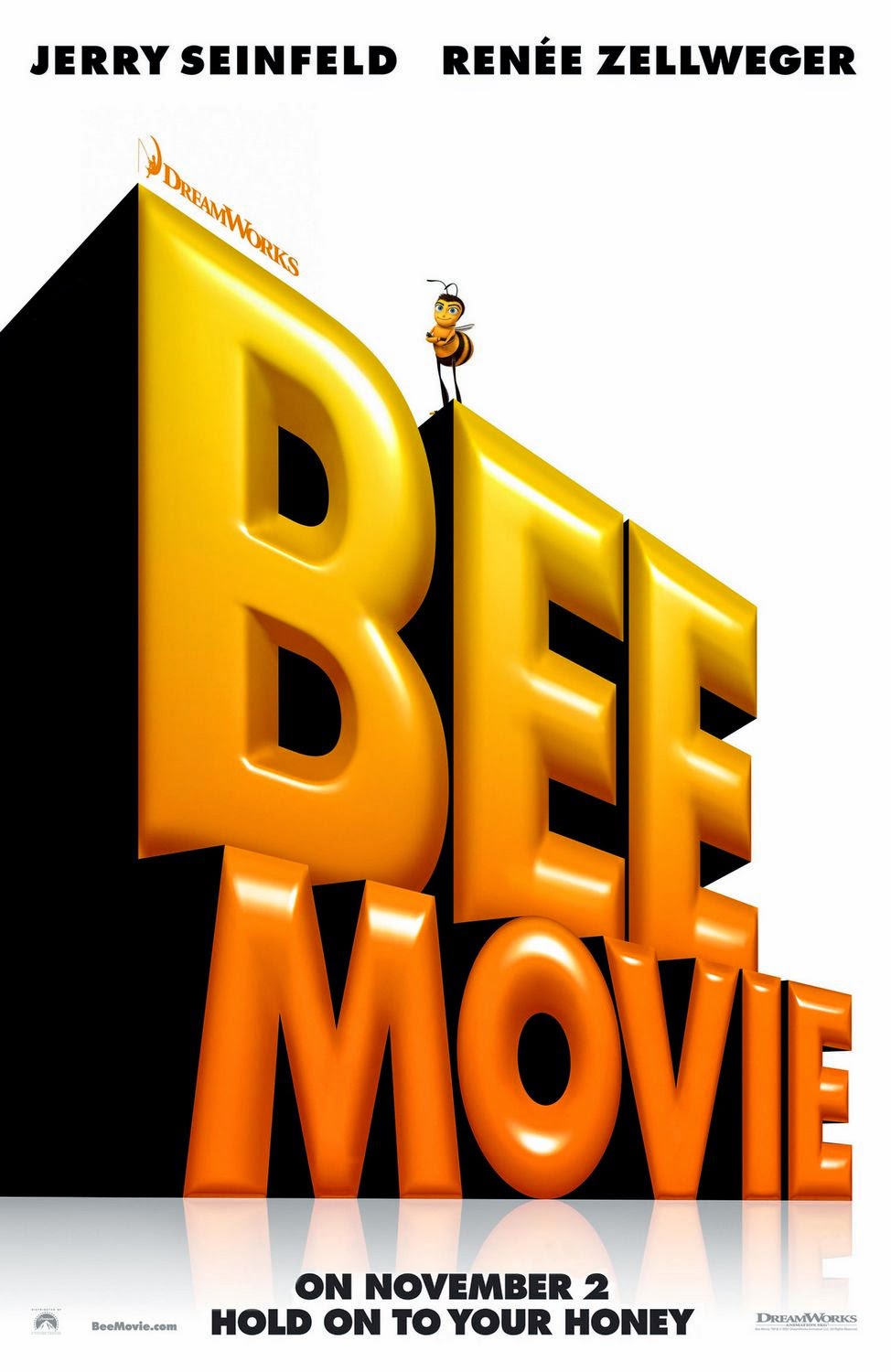 I suffer from apiphobia, largely thanks to the childhood trauma of having a swarm of bees take residence inside my living room window. Turns out that'll do it. So it makes sense that I would have avoided the 2007 Jerry Seinfeld vehicle Bee Movie like the plague, despite its invitingly dumb title. As it happens, I had nothing to worry about.

The bees in Bee Movie bear about as much resemblance to the real life insects as a stiff, chunky collection of polygons resembles a human being. I was handily provided this frame of reference by the film's animators, upon whom I will not lay blame for the pronounced lack of craft that Bee Movie displays, rather supposing it to be one of the conditions of the transaction between Mr. Seinfeld and the Devil that allowed the film to be made in the first place. 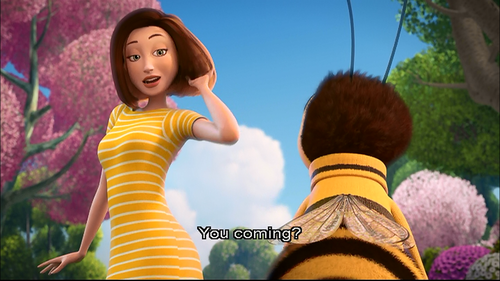 In addition to walking around light one soul, that is.

Before we dig in any more, let's keep in mind that this is a movie geared toward children. I am well aware that I, and likely you - being able to read and all - are not in the demographic for this film. Children's entertainment must be judged on a different scale, much as they are produced on a different scale, the measurement for which seems to be "children are just tiny poop bags with eyes, right?"

Speaking from experience as a former child, although their standards for entertainment do tend to be much lower, youngsters are still capable of conscious thought and preference development. While it is true that they may amused enough by the heightened performances and bright colors of a movie like this, it is no accident that - when called upon to pick out a movie to watch, they'll always go for a Disney release or maybe even Shrek and Ice Age before freaking Bee Movie.

Bee Movie is not a staple on home video shelves (Do those even still exist? Am I aging out of the industry already?) for several very good reasons, chief among them being that it sucks. But we're not here to spew vitriol. We're here to review a movie and review it we shall. 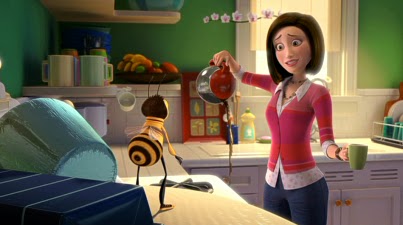 Sometimes my commitment to reviewing every film I watch feels less like a sprightly challenge and more like furious self-flagellation.

So, the (urp) plot of Bee Movie. Recent college graduate Barry B. Benson (Jerry Seinfeld, who does not once sound like anything other than the 53-year-old man that he is) is a bee with a problem. Once he picks a job, he's stuck with doing the same task every day until he dies. After [CONTRIVANCE OMITTED], Barry ends up outside the hive for the first time, where he meets human florist Vanessa Bloome (Renée Zellweger). He instantly falls in love because Bee Movie has a startlingly laissez-faire perspective on inter-species romance for a PG-rated film.

After his trip, Barry begins to question the necessity of dedicating his life to becoming a mindless drone, unlike his friend Adam (Matthew Broderick), who is totally down to clown with the whole "mindless drudgery until you expire" thing because [LIFE LESSON ABOUT HOW SACRIFICING YOUR BLOOD TO OIL THE MACHINERY OF CAPITALISM IS A GOOD THING OMITTED].

As if that wasn't enough blisteringly obvious yet powerfully unsettling conflict, Barry also decides to sue the human race for stealing honey from beehives across the world. Due to an unforeseen loophole in the legal system (Think about it - what does the Constitution have to say about bee rights? It's a shocking oversight.), he succeeds in getting the case to court. If you ignore the facts that the fate of the entire human race can't be decided in by one solitary American judge, that bringing a live grizzly bear into a courtroom isn't exactly airtight evidence, and that any human hospital would be litigated into oblivion for medical malpractice after replacing Adam's stinger with a used cocktail sword, Bee Movie... you know what, it still doesn't seem like a coherent film, my apologies for leading you down this long and treacherous path. 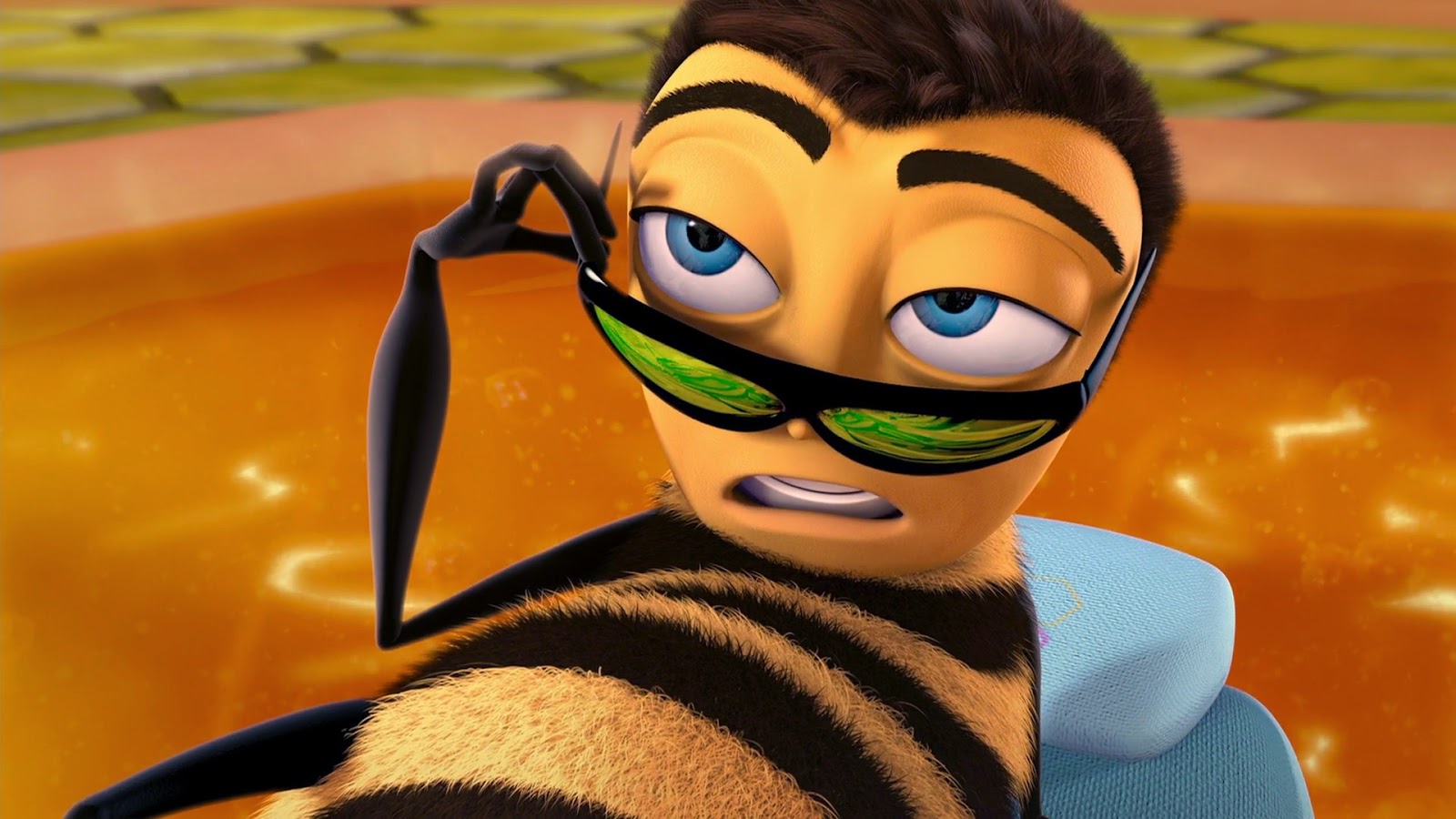 And I didn't even mention the scene that directly references The Graduate, a dangerous maneuver for a film of this caliber, reminding us of one of the enduring classics of modern cinema.

It's telling that Bee Movie is at its best when making weapons-grade dad puns based on words like "buzz" or "sting" or (duh) "bee."At this unpretentious, sophomoric level, it is at least engaging. Unfortunately, the film has a ruinous ambition to be much more than its humble stature. The basic puns are rattled off fairly quickly in the opening scenes and the jokes begin to be reluctantly squeezed out with great effort, like the last bit of toothpaste in the tube.

The film sputters when it decides to make a loathsome drag queen joke, then both engines go out and it enters free fall during the scene with Larry King as a bee. Keep in mind there's not a lot of material there to begin with, but any numbskull could come up with a couple terrible monikers for this character. Larry Queen? Buzzy King maybe? Its repertoire of low-hanging fruit exhausted, Bee Movie couldn't muster the strength for a joke even that feeble. No, this character is merely called "Bee Larry King." No fuss, no muss, all atrocious. And this is cleanly at the halfway point.

The film's most lasting humor comes from Patrick Warburton as Vanessa's douchey boyfriend Ken. This is a microscopic accomplishment considering that you could leave Warburton in a room by himself with an in-flight magazine and a tape recorder and he'd leave you with something more worthy of distribution than the entirety of the non-Ken scenes in the film.

With the brief flashes of wit slowly trailing off as the film goes on, it's like watching a stand-up comedian bleed to death onstage. 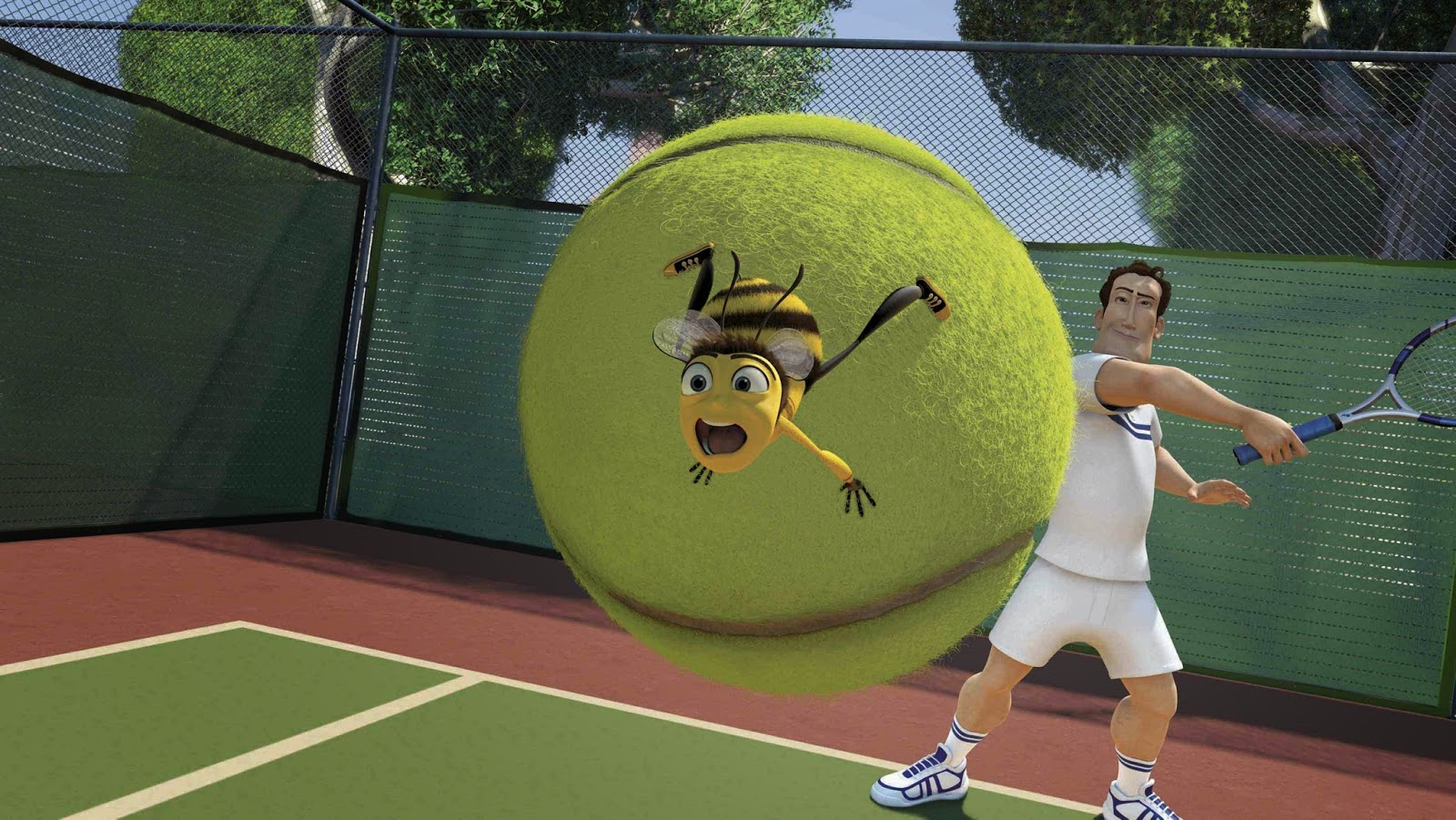 Come to think of it, that might actually be more entertaining.

Did you think that "bleeding to death" joke was in poor taste? Don't. Bee Movie wouldn't mind, it contains far darker humor than that. So dark in fact, that my friends and I began keeping a body count as a gag, but found it rising in earnest until it reached a point even higher than my most recent slasher movie.

This is a movie (for kids - always remember this is for kids) in which death is a very real and present force, Barry battles a stockboy with a knife, later survives an attack from a makeshift flamethrower, and characters trade witty repartee about a suicide pact. And don't let me let a minute go by without mentioning that the human and the bee have an (admittedly chaste, but stunningly creepy) intimate relationship. It's children's entertainment as curated by Buffalo Bill. 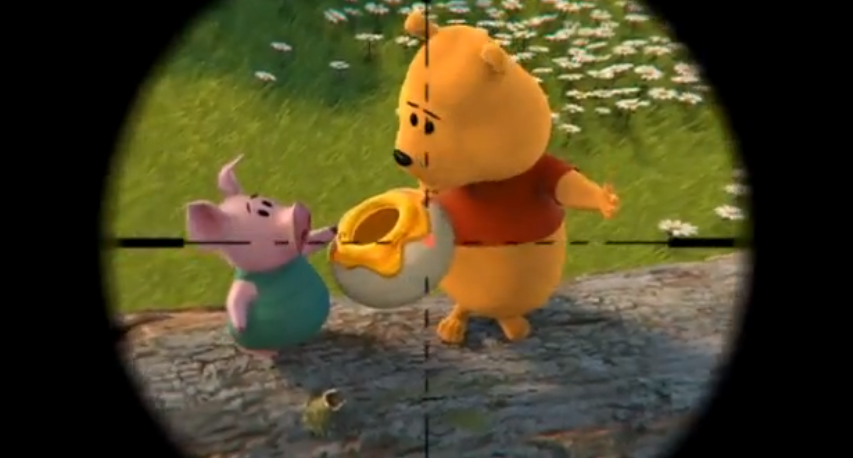 I'm really not kidding about this movie, you guys.

I've already been mean enough to the animation, but I'd also like to take a brief moment to mention how Vanessa's hair moves like it's been frozen in carbonite and the character that is supposed to be Sting (of course he's in this movie) looks more like a half-melted Tussaud statue of Neil Patrick Harris.

What the movie lacks in humor, quality, and entertainment, it does not make up for in coherence. The plot skips from beat to beat like a drummer with one arm, never quite landing anywhere long enough to establish anything worth following, completely devoid of connective tissue.

You know that scene in heist movies where the leader goes through the plan and the audience is shown a brief montage of what each step will look like when it happens? Well, there's a scene exactly like that, except that's the entire span of the heist. The plot buzzes by so quickly, it's impossible to gain a foothold on what exactly is happening or why exactly we should care. And the mechanics of the universe are so dubious (a man can hear a bee clear its throat from yards away, honey farm workers regularly talk about what chumps bees are) that they become all you can focus on as your desperate brain searches for something with which to occupy itself. 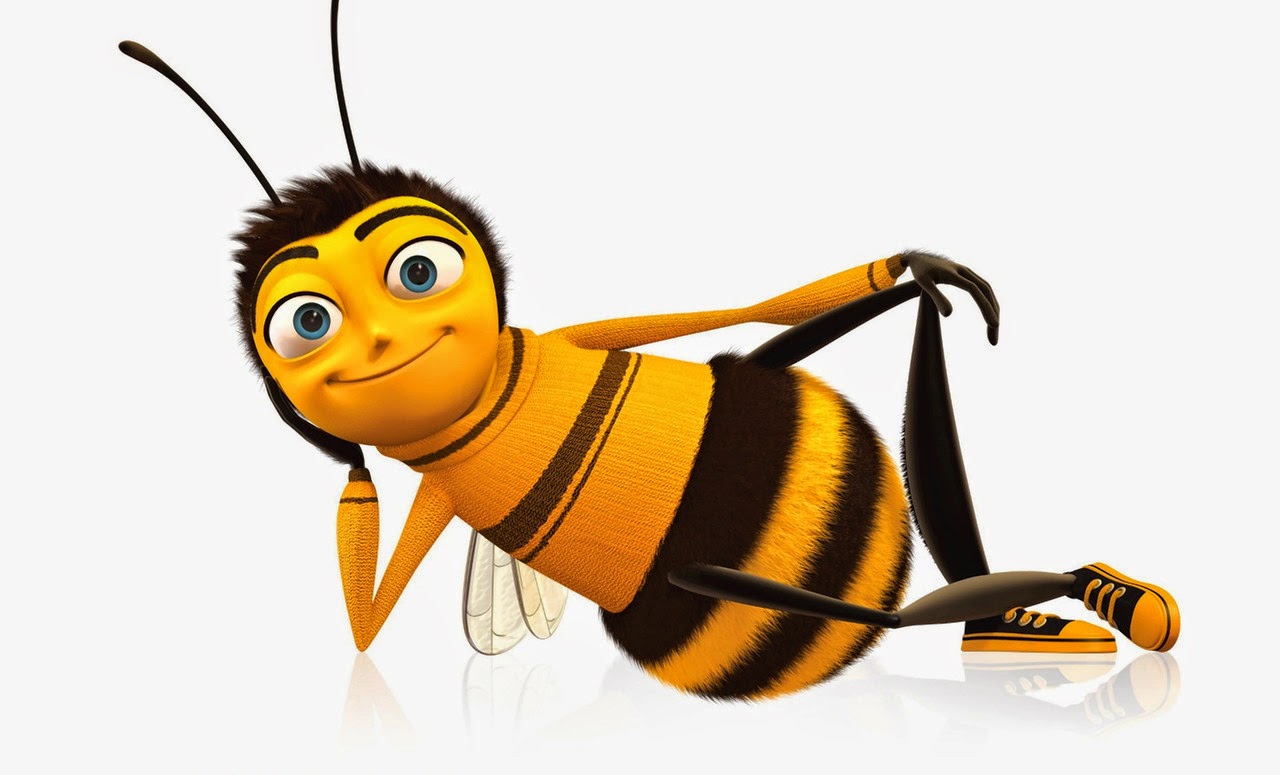 Something other than this.

So, no. I did not like Bee Movie. It is a hyperactive waste, the cinematic equivalent of a kid downing twenty Pixie Sticks and telling a bedtime story. Also Chris Rock is in it for twenty seconds. I'm not exactly a fan, so please take this with the gravity it deserves - I wish his part in the movie was bigger.

It might be true that you catch more flies with honey, but who would want flies in the first place?