I've Seen the Future, and It Is Low Budget 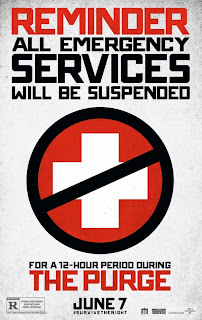 These home invasion movies are getting pretty big now, or so it would seem. A preview before The Purge for the upcoming film You're Next features a mind-numbingly similar plot line, and both films clearly raided the costume closet of The Strangers.

But I digress. Despite what it, let's say, borrows from its predecessors, The Purge has a leg to stand on with a solid and clever premise. It is the year 2022 and crime is at an all time low. The economy is booming and the quality of life is as never before, all because one night a year all crime is legal. Ordinary people can murder, rape, and pillage to their hearts' content ostensibly for the purpose of getting pent up aggression and violence out of their systems.

Our protagonists for the evening are the Sandin family - a wealthy clan living in a gated community. The father, James (Ethan Hawke), is a successful businessman who sells state-of-the-art security systems for use during the Purge. His wife Mary (Lena Headey, who I'm told is a Game of Throne) is a woman who womans. Their teenage daughter Zoey (Adelaide Kane) rebels against the strict rules laid down by her father, spurred on by her Statutory Rapey boyfriend, Henry (Tony Oller). The younger son Charlie (Max Burkholder) has invented a little remote-controlled robot that is equipped with night vision and silent wheels and has a secret hiding place behind a loose panel in his closet. You can practically hear Chekhov's gun getting cocked for the third act.

At 7 PM, the Purge begins and the family cozies up behind their thick steel barricades, safe in the knowledge that they will live to see another - oh, wait. Charlie let in a homeless man who is being pursued by a cadre of masked strangers. 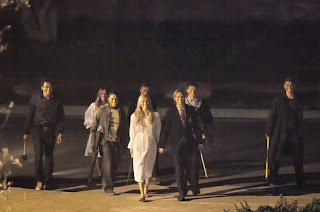 Oh, that Charlie. What a goof.

The strangers, led by a charismatic and totally bonkers young man (Rhys Wakefield), have picked this man as their target for this year's Purge and will stop at nothing to see him dead. They threaten to murder the entire family if they don't turn the man over to them. The Sandins take issue with this, and prepare themselves for the longest night of their lives.

The Purge is one of those magical movies through which I can convince my boyfriend I'm psychic by accurately predicting every story beat about 20 minutes before it happens, though that isn't necessarily a bad thing. There is some comfort in familiarity, after all, and The Purge delivers a mostly solidly constructed home invasion thriller that is engaging and (perhaps most importantly) brief.

By sticking with an 85 minute run time, credits included, The Purge ends before it can squander the underdog goodwill earned through its absurdly low $3 million budget. There are a few key movie sins that, had we been forced to spend more time with them, would have overwhelmed the production. For the sake of simplicity, I will divide these flaws into three categories.

First, The Purge is a less than flawless morality play about class division and right to life that frequently bludgeons the audience with its opinion. Obviously, the filmmakers had Something Very Important to say, and wanted to make sure nobody missed it.

This is not an unfounded concern. A good portion of the film is devoted to news coverage of the Purge showing people being mercilessly beaten and killed in every corner of the country. In a very Hunger Games-esque touch, this footage is compiled for the wealthy families to enjoy from the safety of their own homes. The point being that society at large is so desensitized to violence that real world atrocities have become nighttime entertainment. That this message occurs in a film in which the primary draw is the violence inflicted upon unwilling participants is not addressed.

Most of the violence in the film is inflicted upon faceless, mask-wearing criminals or villains so cartoonishly evil that they are in fact stripped of all humanity. However, this doesn't change the fact that  this is exactly what the filmmakers are condemning, and that cognitive dissonance lingers throughout the film. 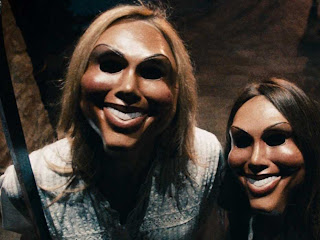 Yup, there's still humans under there. Isn't it weird how masks work?

Second, the editing is kind of a mess. The entire film takes place in a sprawling mansion but we the audience get very little sense of the geography of the house and where rooms are in relation to one another. Thus intercutting a scene of somebody about to get murdered in one room and somebody running to save them from another room has no real impact because we have no clue how close together those rooms actually are.

In addition, there is a lengthy stalking scene straight out of an 80's slasher movie in which Mary crosses three rooms pursued by a shadowy figure that, if the cross-cutting is to be believed, actually took place over a good half hour of filmic time.

And do you know that scene in the end of every action movie where the hero is about to get stabbed/shot/freeze rayed but the villain screams and falls, revealing the sidekick holding a gun who miraculously saves the day? Do you like that scene? Good. It happens approximately 29 times.

Finally, the characters act like the worst of the worst Stupid Horror Movie Characters. They bumble all over the place slamming doors and turning lights on when they're trying to hide and getting jump scared around every corner. The first ten minutes even feature the hackneyed "something is hiding behind the refrigerator door!" scare.

Under the bed. Unique. Good work.

These scenes can be found in any commonplace horror movies from any decade basically since films have existed, and are the biggest detriment to the film. For The Purge is not at all a good horror movie. I would go so far as to suggest that it isn't even horror at all. Oh, it tries to be. But what the filmmakers ignore is that they actually have a pretty good action thriller on their hands.

All in all, despite its flaws, The Purge is a serviceable thriller that, while predictable, is built on a fresh premise and is accommodating in giving us what we want to see in terms of a butt-kicking good time (if you ignore all that high and mighty moral stuff). It also features some truly impressive world building. The Purge creates and inhabits its own universe, and not once did I doubt that this was a world in which the Purge has been happening for years.

In fact, one of my favorite details of the film was in the beginning. As the neighbors were preparing for that night's Purge, instead of saying "Good night" or "See you tomorrow," they said "Have a safe night." The manner in which it was said indicated that it was a commonplace saying, one that has long since gained acceptance in the lexicon of their world and that nobody really pays attention to. It's just a part of that pre-programmed script of small talk and daily pleasantries, tucked snugly between "Nice weather today" and "How's your kids?"

The Purge works best when it gets to play with the world it has created and luckily it doesn't disappoint. And even though it has some big problems, it is a genuine film and you can feel the personality of the filmmakers behind every frame, which is worth a couple extra points in my book.

TL;DR: The Purge isn't what it wants to be, but the thing it is isn't too shabby in and of itself.
Rating: 6/10
Should I spend money on this? Yes, because it really is an impressive movie for its miniscule budget.
Word Count: 1323
Reviews In This Series
The Purge (DeMonaco, 2013)
The Purge: Anarchy (DeMonaco, 2014)
The Purge: Election Year (DeMonaco, 2016)
The First Purge (McMurray, 2018)
Also sprach Brennan at 1:32 AM