For our podcast episode about this very film, please click here.

Hello! The time has come for my big announcement!

I just got hired to write for an indie publication called CinemaBeach. It's unpaid, but there are some press perks and it's a very exciting opportunity.

I will be running a horror column called Killer Waves and reviewing new indie horror releases, which means I get to go to the Laemmle Theatre in Beverly Hills (and the nearby Sprinkles Cupcake ATM) a lot more often.

I will of course keep posting here. I like to review every movie I see and CinemaBeach has no use for mainstream movie reviews.

However, when I write a post for the website, I will link to it here and consider my work done for the day. One post a day is my goal and I don't think anybody can complain if that post is in a slightly different format.

My first official review in my new capacity is of the Australian import 100 Bloody Acres, and please check it out. I'm very excited.

Note: Because the format is different on CinemaBeach and doesn't include ratings, I will post my usual information here along with a link to the article. 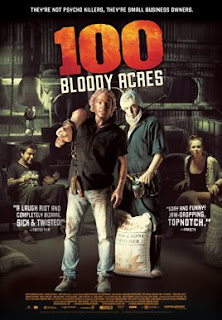 Leave it to the Aussies to find the fun in bloody mayhem. 100 Bloody Acres is filled with wicked glee ,whether it’s presenting a severed hand, a vat of carnage, or a local radio jingle. Taking place in a small town in the Australian Outback, the film follows a group of three teenagers who are on their way to a music festival. When their car breaks down (as vehicles in these types of movies are wont to do), they are given a lift by Reg Morgan (Damon Herriman) of Morgan Organic, a local blood and bone fertilizer company.
Unfortunately, times have been tough for Reg and his brother Lindsay (Angus Sampson) and they have been forced to cut corners in order to make ends meet. Lately Reg has been culling new blood and bone material by appropriating still warm bodies from roadside wrecks. He is in the middle of delivering a bloody metalhead when the hitchhikers discover the corpse and the brothers are faced with a tough decision.
On one hand, they could threaten them to keep their mouths shut and send them on their merry way.
On the other, they could really use fresh fertilizer for a big delivery this afternoon.
What ensues are hearty laughs, geysers of blood, and a comic examination of the interactions between country folk and city slickers. This horror comedy is decidedly more funny than scary (the filmmakers were more keen on making you cringe instead of shriek), but the humor is so devilish that the dearth of scare sequences is not to be lamented. Some would even go so far as to call this film a straight comedy, but the humor is hung on the framework of movies like Saw or Hostel, and in fact could not have existed without their influence. As it happens, the audience is too busy laughing to discuss the intricacies of genre.
A standout performance is Damon Herriman, whose Reg is simple, polite to a fault (even when taping someone’s mouth shut), and too scared of his big brother to raise a stink when it comes to his alternative business methods. Cute as a puppy dog, Herriman somehow manages to make Reg an audience favorite despite some of his more morally reprehensible actions. His inherent goodness hangs in the balance of a delightfully subtle portrayal for which the filmmakers should be immensely grateful. Drinking a juice box while covered in blood is a naturally funny concept. But with Herriman behind the wheel, it is not only a silly gag but an important character moment.
Also a standout is Anna McGahan’s Sophie, a strong woman whose role is key in subverting the historically misogynistic slant of the torture genre that the film is riffing on. There is a particularly vicious case of slut shaming at the middle mark that would make any feminist cringe, but the characters that view Sophie’s sexuality as immoral get their comeuppance in the end. In fact, a diatribe against her actions is explicitly detrimental to one character’s survival. It reflects very well on the filmmakers that they not only take a stance on a hot button issue, but avoid bludgeoning the audience with a “moral”. It’s obvious that we should root for her character, and we do. That’s all there is to it, no need to make a fuss.
One of the biggest strengths of the movie (besides Sophie being one tough sheila) is that every character’s actions logically follow from their circumstances and personality. Albeit that logic is somewhat twisted, but it makes perfect sense in the heightened cinematic reality of the film. There is a complete lack of dumb horror movie character behavior and, though mistakes are made, the setups are unforced and avoid the common “Don’t go in the basement, stupid!” pitfalls.
Regrettably, sometimes Australia-specific jokes or concepts will fall flat for American audiences (John Butler? Australia Day?), but in general the humor is broad enough for international audiences to enjoy and sharp enough that even if one doesn’t understand a particular cultural reference, it frequently adds to the absurdity rather than detracting from the audience’s understanding. But that is beside the point, because the film is necessarily Australian. Many plot points hinge on social, economical, and environmental structures unique to the country. For example, many horror movies accentuate the protagonist’s predicament by placing her in a far-off location where nobody can hear her scream – the mountains, a cabin in the woods, and sometimes even space.
In Australia, every single place is like that.

The movie is far from flawless, but the humor is satisfying and rich, the gore is suitably realistic and campy for the bloodthirsty horror faithful, and the underlying message is sincere but not too preachy. 100 Bloody Acres is a must-see for fans of comedy and horror alike, although more squeamish audience members may wish to sit this one out.
TL;DR: Bloody good fun, with a uniquely feminist and frequently hilarious riff on the backwoods torture genre.
Rating: 8/10
Should I Spend Money on This? It might be hard to catch it in a theater, but it's a worthy film to catch on demand for a night in.
Word Count: 908