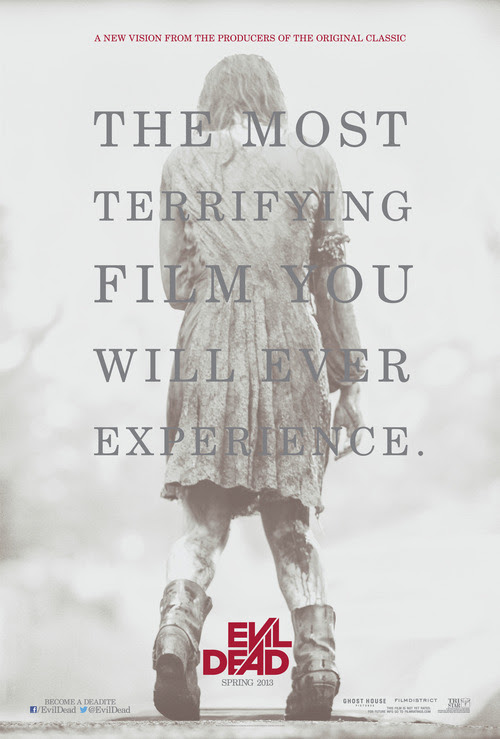 Year: 2013
Director: Fede Alvarez
Cast: Jane Levy, Shiloh Fernandez, Jessica Lucas
Run Time: 1 hour, 31 minutes
MPAA Rating: R
All I can say is, thank (nondenominational) God for R-rated horror. Leave aside whatever baggage you may have about this film - your connection to the franchise, the absence of Bruce Campbell in front of and Sami Raimi behind the camera, or hatred of the Hollywood remake culture. This film is a no-holds-barred, unflinching, genuinely fun splatterfest and we really don’t get enough of that in this demure PG-13 horror economy.
I swear if you comment to argue against that statement and mention the Saw series, I will cut you in half. 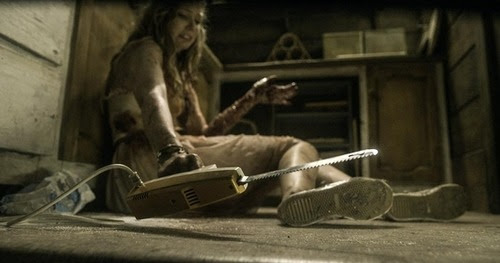 It will not be pretty.

OK, so now that I’ve already stated my opinion of the movie taken alone, it’s time to put it in context of the original series. The remake retains some of the more inspired Raimi elements - the swooping Steadicam shots, the frenetic editing, copious vomit, and gallons and gallons of blood. And gallons. Gone, however, is the slapstick comedy of Evil Dead II and even the relatively toned down absurdity of the original.
Don’t get me wrong, this movie is absurd. Any film in which a character survives being shot repeatedly with a nail gun, stabbed in the chest, neck, and face, and just generally being further bandied about involves a certain amount of suspension of disbelief. However, the universe of the new Evil Dead takes itself much more seriously and treats its subject with a gritty realism.
The plot - like anyone needs a recap - revolves around 5 young adults spending a weekend in an old abandoned cabin in the woods. When they discover an old book in the basement, an incantation is read aloud and they unwittingly summon dormant demons who proceed to attack and possess them one by one. 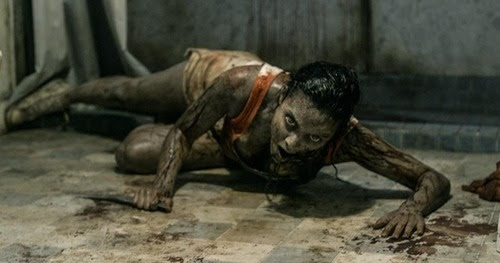 Didn’t somebody mention zombies? No?
One of the few aspects of the film which is an outright improvement on its predecessor is in the characterization - while the original cabin is populated by one-dimensional characters on spring break, our gaggle is here to support Mia (Jane Levy), who is determined to kick her drug addiction and figures the cabin is isolated enough to avoid temptation. She is accompanied by her estranged brother, David (Shiloh Fernandez). There is some backstory with a dying mother, and it’s all pretty routine but - hey - it’s backstory.
Mia’s two friends are likewise given enough character traits to resemble actual humans. The only weak link is David’s girlfriend Natalie (Elizabeth Blackmore), who might as well be a grocery bag filled with raw meat for all the importance she has to the story. She doesn’t even get a name until about five seconds before her gruesome demise - she’s actually introduced as “my girl.”
So what we are given is a grisly remake combining the madcap grosserie of Raimi’s magnum opus with some actual characters hung on the framework of a grittier, more modern premise, and there’s really nothing wrong with that. 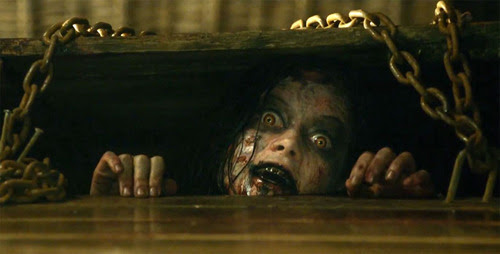 Any movie with this shot can’t be all bad.
One might think that, since this is the third time we’ve heard this story in theEvil Dead franchise alone, the cabin in the woods thing would have grown stale by now. However, this film proves that it has more to say - even if it’s just new and clever ways of grossing us out.
I have thus far sung the praises of this film, but it is far from flawless. The lack of humor was a blow to the film, albeit not a fatal one. Without the manic glee of the original, the gore and pain is just a little more real, deadening a little of the enjoyment.
Without the slapstick and antics to draw a veil between our universe and the filmic space, it’s a little unsettling watching people getting sliced open and otherwise maimed. However, the sheer amount of gore and blood is elegantly over the top, which saves it from being too realistic to handle.
Groovy.
TL;DR  This remake of a classic is a worthy experiment - not totally successful, but also not completely unnecessary.
Rating: 7/10
Should I spend money on this? I may be somewhat biased, but hands down yes. Evil Dead without a doubt will be on my top 10 of 2013 list, flaws and all.
Word Count: 750
Reviews In This Series
The Evil Dead (Raimi, 1981)
Evil Dead 2 (Raimi, 1987)
Army of Darkness (Raimi, 1992)
Evil Dead (Alvarez, 2013)
Also sprach Brennan at 12:17 PM