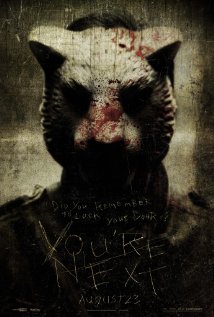 First, some bragging: This film is due to come out in wide release on August 23rd, but luckily I have a Sergio who got us tickets to see it at the LA Film Festival at LA Live. It was an incredible experience. Also, we saw Sugar Ray Leonard there, which I'm told is a big deal.

You may recall this post in which I lamented the apparent lack of creativity in the horror field today, citing You're Next as another example of by-the-numbers post-Strangers home invasion thrillers. And for the first fifteen minutes or so, that's exactly what it was, although with more of a slasher tinge than most.

The opening scene features an age old slasher standby - the Opening Scene Couple. There wasn't much to say about it except the girl one had boobs hanging out of her shirt and actually gave a surprisingly nuanced performance for a throwaway character with no lines. This scene plays out exactly as we expect it to, and the scares are telegraphed long ahead of time.

That's all well and fine, if not particularly inspired, and it is with somewhat diminished expectations that we join our hosts for the evening, Paul (Rob Moran) and Aubrey Davison (Barbara Crampton), a couple who are celebrating their 35th anniversary tomorrow in their vacation home in Middle of Nowhere, USA. Moran and Crampton are easily the two weakest links in this ensemble cast and their stilted dialogue exchanges remind one of every poorly made shocker from the last 20 years, which is perhaps the point but I'm not willing to give the filmmakers too much credit on that one. I give them far too much credit later for it to really matter in the long run, anyway.

Their children arrive one by one (significant others in tow) to celebrate and, although the next paragraph is somewhat of an exposition dump, the film achieves it in such a way that we can actually keep track of their names and the basic relationships between each character without too much trouble. This is filmmaking at its simplest, but something a lot of horror directors never seem to manage to do well with such big casts.

First to arrive are middle brother Crispin (AJ Bowen) and his Australian girlfriend/former student, Erin (Sharni Vinson). Then comes the eldest son, Drake (Joe Swanberg) and his wife Kelly (Sarah Myers - no, that stage name is not lost on me). Drake seems to enjoy tormenting Crispin, amusing the others, but Crispin is having none of it. Then all at once their daughter Aimee (Amy Seimetz) arrives, toting her hipster filmmaker boyfriend Tariq (Ti West - an actual hipster filmmaker who gamely embraces self parody), little brother Felix (Nicholas Tucci), and his edgy alternative (read: annoying) girlfriend, Zee (Wendy Glenn). With the pieces in place, the game can begin. And so it does, when during a tension-filled dinner party, the diners are attacked by a masked crossbow archer through the dining room windows. 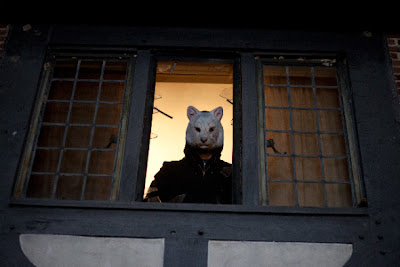 And here is where the film begins in earnest. The filmmakers have already proved they can choreograph a decent jump scare, but that's worth nothing nowadays. That's all modern horror has left. But with this scene begins the first of many in which the driving, heart-pounding fear actually comes from the situation instead of the things that go boo in front of the camera. Tension! In a horror film! What is this, the 70's?

And then the glory. After the filmmakers draw back their gums and reveal their fangs, the bombshell drops. This movie is a horror comedy. A good one, at that! The balance of funny and scary is a notoriously razor thin edge, and to date only a handful of movies have successfully achieved it (Evil Dead II, we're looking at you). You're Next honestly is one of the most flawless attempts at the genre. Think a less overtly meta Scream.

And thus is the beauty of the film. It relentlessly juggles being terrifying, hilarious, a home invasion thriller, and a wicked slasher film, never dropping a ball. It's obvious the filmmakers loved the horror films of their childhood and wanted to make one of their own. This home invasion thriller owes just as much to Halloween and A Nightmare on Elm Street as to The Strangers and the multitude of visual nods and subtle references are smoothly integrated into the film, not detracting one bit from the unique story it is trying to tell. A movie made with that kind of love and attention is a treasure to watch no matter how good it is. Luckily, this one is pretty darn good. 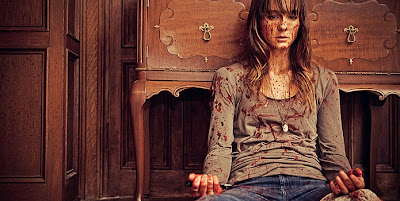 This picture contains many things I like. Those cabinets are incredible.

As things go from bad to worse, Erin quickly proves herself a game challenger. She will stop at nothing to protect this family, whose members are too busy squabbling and crying to be much help. After watching so many horror films where the dumb girl goes to investigate that strange noise, draped in her bedsheet, it is so refreshing to see a girl who actually follows the advice we shout at the screen. Because of this, we can forgive her of her few horror movie mistakes. She's only human.

And there's the zinger. Although some of the minor characters can be pretty one dimensional, the core cast is a totally relatable, believable group, thanks either to the writing, the performances, or both. The movie can (and frequently does) descend into a wildly fun horror romp, but it rarely forgets that its characters are actual human beings.

I'm tiptoing around the plot, because I really don't want to ruin anybody's experience with this film, but I will add that the later sequences are alarmingly well staged, the editing keeps us grounded in the reality of the location, and the cast and crew are clearly having a lot of fun.

While this film might never join the widely beloved horror pantheon of Freddy, Michael, and Jason, it is certain to be a fixture on Top 10 Horror Lists of 2013 (mine as well), and maybe even of the decade. 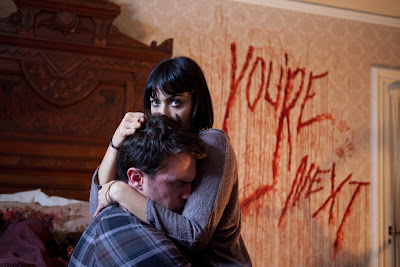 UPDATE: Looking through my notes, I realize I forgot something. Shaky cam is a thing, but it goes away as the movie progresses. I like to imagine it's because the movie starts off shaky, but then finds its footing and kicks butt.

UPDATE #2: According to IMDb and everyone else, Crispin's name is spelled "Crispian," but I reject that on the grounds that it's stupid.


TL;DR: Hilariously bloody and bloody hilarious, You're Next walks the tightrope between horror and comedy with ease.
Rating: 10/10
Should I spend money on this? This movie has been bouncing around in Lionsgate's back drawer since 2011 and it deserves as much love as you can afford. I know I'm going to see it again once it comes into wide release.
Word Count: 1183
Also sprach Brennan at 4:12 PM