It's hard to focus today, because in less than 12 hours I will be at the Hollywood Bowl with the Angel Cassidy trying not to faint so I can watch Ke$ha perform in all her glittery fabulousness. Also some rapper will be there. 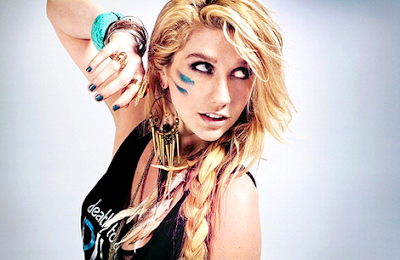 So in honor of the day (I'm prone to inventing holidays. Life's a party.), I leave you with this.

I never said these songs were good, per se. But this is one of my favorite songs to shout along to in the car. It's just so full of the young energy and trashy fun that made Ke$ha a star. Also I love those two synth blasts in the middle of the chorus.

Ke$ha can sing! Ke$ha can sing country! Although she has definitely less need to prove her talents at both vocal work and songwriting now that we have access to her sophomore album, Warrior, this song is Ke$ha in tip top artistic (and moody) shape.

This is one of those songs that didn't get cut because it was bad, but merely because it didn't fit in with the image they were going for. Most of Ke$ha's out of character songs ended up going to other artists (including Britney Spears' Till the World Ends), but unfortunately this one wasn't picked up.

Proving once and for all that Ke$ha can Natasha Bedingfield better than NB herself. *mike drop*

Again, this one isn't actually super good, but it's just so Ke$ha. This one was actually later recorded by Austrian pop artist Charlee, but was never released in the US.

Katy Perry and Ke$ha are actually friends, and Ke$ha is featured in her video for I Kissed a Girl. Whoever decided to pull this glitzy confection of collaboration should be fired. Until the problem is rectified, we have to survive on this underproduced but still fab version.
Word Count: 349
Also sprach Brennan at 9:23 AM