Considering the fact that it’s hard enough to find time to watch movies in my busy college schedule, finding time to write about them is definitely a challenge. So, while I will be as up to date and thorough as possible on reviews of movies that are currently in the theaters, sometimes I watch movies that nobody else really cares about, and shouldn’t necessarily elicit a full review. So as often as possible, I’ll keep you up to date on the less important movies I’ve seen recently (because my own film education is far from finished) in a series of mini-reviews.
But I’m a Cheerleader 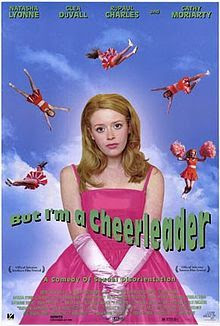 Year: 1999
Director: Jamie Babbit
Cast: Natasha Lyonne, Clea DuVall, Michelle Williams
Run Time: 1 hour 25 minutes
MPAA Rating: R
This film is one of a numerous group of tossaway gay comedies that think they can get away with subpar production on the merit of catering to LGBT audiences.
The thing is, it can. Let’s face it, we’re not exactly seeing Hollywood churn out slick gay comedies by the bushel. While there are certainly some stellar gay movies, cheapie indie comedies are the LGBT cinephile community’s bread and butter.
And this film is certainly a saccharine-sweet example of the genre. The film follows Megan (Lyonne), the titular cheerleader, who is confronted by her parents and friends and sent to an “Ex-gay” camp for teenagers, even though she insists she isn’t a lesbian.
Not a Spoiler Alert: She is.
She falls for the resident bad girl, Graham (Clea DuVall) and they struggle to find themselves in the most poisonous environment for any new lesbian relationship. What follows is 80-something minutes of tender, well-meaning, if not particularly stellar comedy.
Lyonne’s acting is laughably vacant. My friend Shannon put it best: “They could not have picked a straighter actress to play Megan.” Despite not once having me believe that she actually ever had sexual feelings for women, she and DuVall managed to have a spark (chemistry which is owed in its entirety to DuVall’s sturdy performance, without a doubt the best in the movie).
Also featuring appearances by RuPaul and Mink Stole (who always manages to find herself in these things), the movie is solid overall with garish production design and snarky conservative satire. It delivers an optimistic message to gay youths everywhere, but isn’t particularly worth seeing if you happen to be (ew) straight.
Rating: 5/10
Patrik Age 1.5 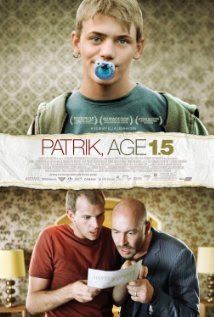 Year: 2008
Director: Ella Lemhagen
Cast: Gustaf Skarsgård, Torkel Petersson, Tom Ljungman
Run Time: 1 hour 43 minutes
MPAA Rating: R
On a whim the other night, I decided to forgo homework and watch a movie on Netflix. I happened upon Patrik Age 1.5 (or Patrik 1,5), a Swedish film about a gay couple that adopts a 1 1/2 year old child, who due to a clerical error, turns out to be a rebellious, homophobic 15-year-old.
…This week has been a pretty gay week for me, all things considered.
Anyway, I expected this film to be another throwaway gay comedy, something like a Swedish Big Daddy, a family farce of opposites. What I was given was a riveting (albeit predictable) drama that had quite a set of teeth. Everything is not well in Scandinavia.
Patrik’s (Ljungman) arrival in the lives of Sven (Petersson) and Göran (Skarsgård) turns them completely upside-down. Göran can see the good in his surprise son, but Sven can’t see past the kid’s criminal history and the disagreement drives them apart, especially considering that Sven was iffy on the concept of having kids in the first place.
The couple navigates the rough waters of adoption and neighborhood prejudice and delivers a powerful story of modern LGBT relations (partially undermined by the fact that the Swedish word for “homo” sounds hilariously like “bug.”).
The plot moves along in a pretty standard way, but the interplay between Göran and Patrik is impossible to resist. The actors have impeccable (and completely, thankfully, nonsexual) chemistry, and the result is… incredible.
The gay issues don’t actually take the forefront of the plot, and the story focuses on the family drama, and the paternal relationship between a lonely Göran and his new, at first unwilling, son.
I’ve always said that I appreciate gay films that don’t make too big a deal about being gay (because how else will true equality be achieved?), and this film delivered. The fact that it’s in Swedish also is a huge draw, because foreign languages fascinate me utterly.
I would highly recommend it to anyone who cares about people. At all.
Rating: 8/10
Word Count: 791
Also sprach Brennan at 12:02 PM