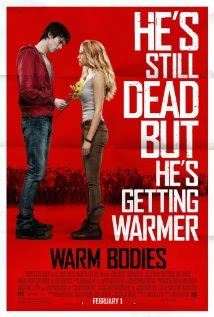 Year: 2013
Director: Jonathan Levine
Cast: Nicholas Hoult, Teresa Palmer, John Malkovich
Run Time: 1 hour, 38 minutes
MPAA Rating: PG-13
It’s poor blog etiquette to keep apologizing for long hiatuses (hiati?), but I’m a little bit ashamed of myself that I haven’t been producing content for a while. I could say I’ve been busy with schoolwork and whatever, but that’s never really stopped me before. To be completely honest, this January-February season has been so weak that I’ve had very little to say about any of the films that have been released, and am even actively sickened by a few of them (*cough cough Identity Thief cough*).
However bogged within the mire of this travesty of a season is, well I wouldn’t call it a gem, but a movie pleasant enough to watch that it seems like a masterpiece in comparison to the likes of The Last Stand, Hansel & Gretel: Witch Hunters, and yes even Mama (And it pains me to say this, as devoted as I am to the horror genre, Jessica Chastain, and the 2-minute Spanish short film upon which it is based, but Mama just didn’t deliver for me.).
But let’s dive into the real meat of the business, shall we? Warm Bodies is a simple story (based on the 2010 Isaac Marion book of the same name) in which R (Nicholas Hoult), a zombie, and Julie (Teresa Palmer), a human girl, fall in love in a post-apocalyptic wasteland. Their love starts to have repercussions - namely the humanization of the previously incurable walking dead.
Their love is forbidden. If Julie’s warlord father (John Malkovich, who is given absolutely nothing to do here) finds out that his daughter’s new boyfriend is an undead corpse, he will be none too happy. And for good reason - R is kind of a bad influence, having just hours before eaten her ex-boyfriend (Dave Franco)’s brain.
So here we have the tragic tale of two star-crossed lovers from warring families - um, factions. Their love, born from an ancient grudge, breaks the world into new mutiny and undead blood makes living hands unclean. For never was a story of more woe than this of Julie, and her slowly rotting Romeo. 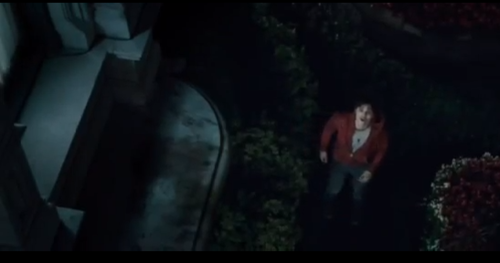 This balcony scene seems famila- Ah, I see what you did there.
The biggest problem with this movie is that there’s really no actual conflict. It plays like a shallow work of theater. The plot zooms along and hits all the right points but doesn’t really seem to connect to anything on its way there.
While this movie was enjoyable, I’ve had dreams that better explore the implications of love after the zombie apocalypse, and if dream logic beats your screenwriting, we need to talk.
There is some business with the bonies - horrific CGI monstrosities (the CGI is horrific, not the monstrosities) - who, although this is never adequately explained, seem to be undead zombies that have given in to their animal instincts and are completely remorseless, incapable of the magical self-curing by love thing that the other zombies seem to have going on. 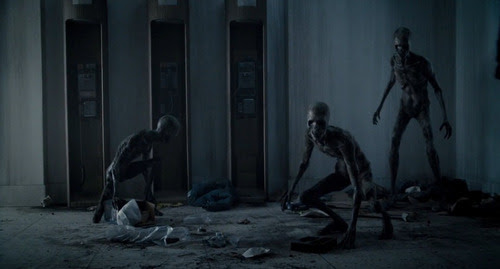 I’ve seen better special effects in an elementary school production of Alice in Wonderland
Once the zombies start to humanize, their hearts begin beating again and they become prey for the bonies, who devour any living thing. Well, in theory. You see, the bonies don’t actually seem to be much of a threat because not once did they kill something onscreen in the entire 98 minute run time of the movie. This may have been a ploy by the creators to reduce the gore in what is primarily a paranormal romance, but it greatly diminishes any sort of suspense these creatures might have generated.
Another serious problem is how inconsistent the zombies are with the rules of their own universe. In the beginning, it is stated that zombies can only talk in grunts or, rarely, drawn-out single words. Also in the punchline to an early scene, the fact that zombies can only move at a slow shambling pace is established. But whenever it’s convenient, our zombies are running around like all of a sudden Danny Boyle is directing the film or forming completely coherent sentences even before they even start to humanize.
But enough complaining. The movie delivers enough charm, especially in the form of Hoult’s performance to endear itself to the audience. And with its tight little 98 minute span, it zips along merrily, never really going anywhere profound, but also being profoundly aware that it doesn’t really need to.

Take a gander at zombie Nick Hoult. You could just eat him up.
TL;DR  Warm Bodies is a harmless little nothing of a movie that doesn’t do a lot with its core concept but is redeemed by its sweetness and charm.
Rating: 6/10
Should I spend money on this? It may not continue to be in theaters for very long, but it is still the best date movie out there at the moment, at least until James Franco: The Great and Powerful comes out.
Word Count: 865
Also sprach Brennan at 12:15 PM