You really should call him.

Today's post has to be quick, because it's a holiday and also we have a visitor from Germany in the house and I don't want to be unhöflich.

In honor of the day, I will review one of my father's favorite movies, one which we watched together with my mother last night over dinner. (That's right, I come home to visit my parents. I'm a good son) 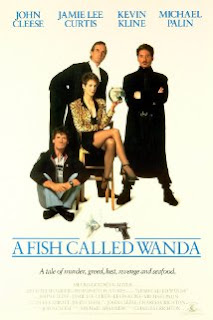 I'm just gonna say it. A Fish Called Wanda has one of the tightest comic scripts of the decade, perhaps even the century. The storylines are balanced, thematically cohesive, have equal importance to the narrative and, most importantly, are consistently funny. On top of a routine heist movie framework filled with double crossings and disguises lies a blistering satire of English-American relations. It comes as no surprise that the script was penned by Monty Python alum (and co-star) John Cleese.

The story follows the dynamics of a group of bank robbers in London: George (Tom Georgeson) is the big cheese gangster. Ken (Michael Palin, another Monty Python alum) is his right hand man with a strong stutter and a stronger crush on Wanda (Jamie Lee Curtis), an American con artist who helps them pull off the heist. Her boyfriend Otto (Kevin Kline) is an American vulgarian and faux intellectual.

Wanda has been dating George for years and seeing Otto behind his back. After a series of double crossings George lands in jail, but not after hiding the jewels and giving Ken the key along with strict instructions to hide it in a safe place and arrange for the only witness's accidental death.

Basically, this movie is the Jamie Lee Curtis show, as Wanda pulls out a complex series of cons on each man in her crew as well as George's barrister, Archie (Cleese). Wanda is conniving, powerful, and fabulous, using her sexuality to achieve her goals.

She is the ultimate feminist character. A strong confident woman, she is miles smarter than any of the men in her life. Even when she is less than successful at her con work, the boys fall for it hook, line, and sinker due to her manipulation of the way society views women.

Even though her wardrobe might as well have "IT'S 1988 HI" printed in glitter over the front, she has never been sexier or more diabolical. I love love love Jamie Lee Curtis and she is really given a chance to shine and play in this role, while still allowing her co-stars to turn in uniformly marvelous performances.

I'm hesitant to give a top rating to a film because nothing is perfect, but if any film comedy comes close, it's this one.