I Think I'm Turning Japanese, I Really Think So

When I was growing up, for whatever reason I thought I was too wimpy to watch horror movies. Never mind the fact that I'd already watched The Exorcist, Poltergeist, The Sixth Sense, The Shining, It, and later Drag Me To Hell with my dad. Side note: My dad is awesome.

Also never mind the fact that I devoured horror literature, was Dean Koontz's biggest source of income in 2008, and at one point owned two copies of The Ruins. Whatever psychosis I was enduring is over now, but it left a glaring gap in my horror consciousness. Once I watched Scream, I discovered late 90's horror and 80's slasher movies, and I'd already seen most of the classics, but there was one genre with not a single entry on my List (this is a real list of movies that I've watched).

That genre is J-Horror. Before this summer, I had not seen a single Japanese horror movie (or a single Japanese movie at that) nor had I seen any of the American remakes, due to my foolishness during the Great Dark Period of the mid-2000's.

My boyfriend Sergio, who is somewhat of a savant with these things (He could name each and every movie previewed on my Ring DVD within ten seconds), unwisely agreed to help me erase that gap in my horror knowledge and at the beginning of summer we set out on a grand movie watching spree. As I am wont to do, I discuss these movies to no end with him and, to give him a break, I'll be releasing mini reviews periodically as we go along.

Before we begin, a brief history of J-Horror. The 2000's were a bleak time for horror films. By then the slasher genre had died thrice over (revived both times by Wes Craven with A Nightmare on Elm Street in 1984 and Scream in 1996). Haunted houses and monster movies? Forget about it. Zombies were on a slow ascent in popularity thanks to the like of Danny Boyle's 28 Days Later in 2002, but fan fervor wouldn't reach a fever pitch until late in the decade and on into the 2010's with The Walking Dead and the advent of zombie chic.

American horror filmmakers needed something to do, so they turned to the misty isle of Japan, which for some time now had been producing eerie, beautiful, and weird ghost stories for some time now. There was a lot of territory to be mined, and after The Ring tested the waters in 2002, it turned out there was a market for it. And thus a movement was born.

Of course the reason is money, right? 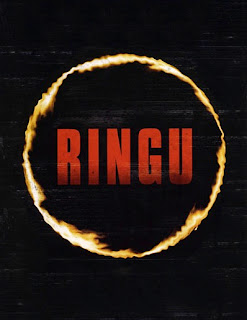 A young reporter struggles to solve the mystery of a cursed videotape that kills you seven days after you watch it.

I am one of the immensely lucky people who managed to see the original Japanese version of The Ring before watching the remake so I can have no shame in saying... it's really not as good. Don't get me wrong, it's a good movie. I just don't really see what all the fuss is about.

The haunted videotape concept is killer, but it's less of a horror movie than a mystery procedural. It has a lot of focus on local and family history, which is a very Japanese mindset so I don't blame them, but it feels like it would be better as a book, which, in fact, it is. The Ring series is based on a series of four books by Kōji Suzuki and it very much plays off as an adaptation.

And one small complaint: Early on in the movie, it is established that you will be told that you are going to die in seven days if you watch the tape. It is somewhat unclear if the woman in the video says it or it is relayed to you by the telephone call you inevitably receive after watching it, and the reason I'm still not sure is because it is never actually said in the film. Nobody tells them they will die in seven days. It just kind of happens.

High point: The little boy Yôichi is the most well-adapted child in the universe. He dresses himself, stays on top of his mother, and he even has a briefcase.

Also the way you are pronouncing the title is wrong. I looked it up, and it's pronounced with emphasis on the first syllable like "REENG-uh". I'm disappointed too. 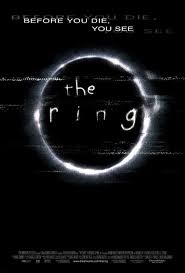 A young reporter struggles to solve the mystery of a cursed videotape that kills you seven days after you watch it, but this time in America.

I've said this already and I'm still ashamed to admit it, but this version of The Ring is marginally better. The concept of the tape is explored a lot more, whereas in the original it is limited to basically just one scene. While it's still mainly about a couple solving the mystery of the tape, there's more of a sense of urgency as things get worse and worse for the main characters as the story progresses.

This film also had the advantage of coming out after the release of the original's sequel, and it combined scenes from the two movies to greater effect, further fleshing out the story of the devious Samara Morgan (née Sadako Yamamura) and sprucing it up with some darkly beautiful imagery. While this film still isn't fantastic, it is easy to see how it made a splash in the bland horror landscape of 2002. 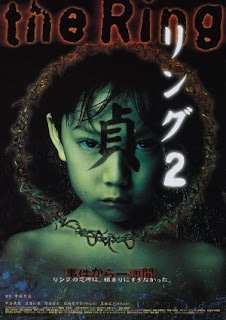 The girlfriend of the dead professor from the first film seeks the truth from his ex-wife and is haunted by Sadako, the girl from the tape.

First things first, this movie isn't technically the original sequel to Ringu. Ringu was released in tandem with its sequel Rasen (Spiral), which was based on the next book in Suzuki's series. However, the sci-fi direction it took did not fly with fans of the original and they demanded something else. So the producers decided to pretend Rasen never existed and brought back Hideo Nakata to helm a direct sequel incorporating the original characters. [Rasen is coming up on my marathon list, so you'll be hearing more on that soon]

Evidently that wasn't enough. Every single review of Ringu 2 that I've read since watching it has panned it, and it got a 0% of Rotten Tomatoes. And who am I to question the great gods of movie wisdom? How dare I question years of scorn and derision? Who am I to do such a thing?

Alright, I kind of loved this movie.

I'll readily concede that maybe it was context that made me enjoy it so much more than its predecessor. During Ringu, Sergio was doing his utmost to distract me from the film so I would pay attention to him, but during Ringu 2 he was sleeping peacefully by my side.

In my defense though, there was a much higher frequency of truly bone-chilling scenes, including a couple that gave me Stage 3 Heebie Jeebies. It has that on Ringu, but it also has this: it's freaking insane. I'm talking Crazy Go Nuts University here. Truly barmy stuff that only the Japanese could have come up with that the movie all takes in stride.

Major plot points received out of nowhere through hallucinations in a train station? More please.

Sadako is a manifestation of angry energy that can only be defeated by turning her into a swimming pool? How is this not already your favorite movie? 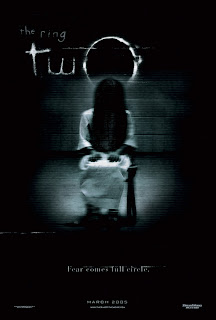 Rachel and Aidan have moved to a small town, but Samara Morgan is after them once more.

And there is no better word to describe this film. A two hour slog that really doesn't revolve around the cursed videotape which was basically the only compelling draw to the film in the first place. The original Japanese director returns for his least effective Ring film yet.

The film opens with some nails-on-a-chalkboard forced exposition: "We're here in a house in Oregon, Aidan. Isn't it sad that your dad is dead?" and goes downhill from there. I'm just gonna leave a list of the succeeding scenes without commentary and let you judge for yourself:

Ju-On: The Grudge (Click here for our Scream 101 episode about this film.) 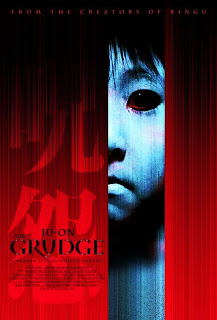 A rage curse kills anybody who steps inside a house where Kayako Saeki and her son Toshio were killed.

This film has an alarmingly perplexing pedigree. To my knowledge and understanding, this film and its sequel (Ju-On: The Grudge 2) are remakes of two direct to video movies from 2000 (Ju-On and Ju-On 2) that are only available in Japan, Germany, and Scandinavia. I'm doing my best to find a way to access them for my marathon.

But not only this: Apparently the original Ju-On is a sequel to what seems to be two short films presented in a Japanese television anthology movie in 1998 (Gakkō no kaidan G), Katasumi and 4444444444. I haven't been able to find a lot of information on these, so they could be anywhere between 2 minutes and 19 hours long for all I know.

Almost as annoyingly confusing as its history is the film itself. No, it's not confusing in a "I just don't understand those Japanese" way, nor is it confusing in a "This movie is far too complex for me" way. It's a continuity-busting, timeline-jumping, total mess of a film that cares far too little about making any sort of narrative sense. Just about the only coherent plot point is that at one point, the man who lived in the house in which the film takes place went insane and murdered his wife and son before commiting suicide, and their rage spirits have been imprinted on the building.

Yes, that is the only part that makes sense.

The plot is episodic: Character enters house. Character is stalked, scared, and eventually killed by ghost. New character is introduced.

This isn't done for any sort of meaning to be drawn from the parallel story lines, but merely as a way to set up even more scare scenes. In this way it is reminiscent of my beloved slasher films' body count padding, but it just kinda gets boring after a while.

It's a real shame, because the scare sequences it sets up when it gets around to it are very good, even great. In fact one scene near the finale of the film affected me so much I shook Sergio awake (he's not as devoted to the whole marathon thing as I am) and replayed it for him, then replayed it for my friends Henri and Shannon next time I saw them.

On top of all that lies the film's biggest problem: There are no rules governing the ghost's behavior. Sometimes it is confined within the house, sometimes it stalks people to their offices or apartments. Sometimes it kills you, sometimes you go insane. Sometimes it's the mom, sometimes the son, sometimes the dad, and one time a trio of zombie schoolgirls. It's a bloody mess is what it is, and I hope against hope that some film along this movie's tangled family line is capable of correcting these mistakes.

That said, I do love the burping ghost. 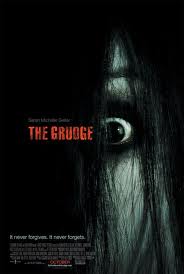 Buffy Summers is an exchange student in Tokyo who is haunted by the ghosts of Kayako and Toshio Saeki.

Wow, I tore right into Ju-On, didn't I? I'm a bit too fatigued from that travesty to really muster much anger against its American counterpart.

Directed by the same man, with the same actors playing the haunted family, and taking place in Japan, this movie shares many of the flaws of the original with the added wrinkle of trying to make sense of the "every main character is white" angle in a Japanese setting.

However, this film is much more coherent, if only because they wanted to keep Sarah Michelle Gellar onscreen for as much as possible so they dropped the whole episodic thing and had mostly all of it happen to her.

The Japanese are freaking terrified of technology.