This is how I spent my night last night. Going in, Cassidy and I were buzzing with excitement over Ke$ha and general warmth toward Pitbull as an acceptable presence we'd have to sit through to observe the Queen.

Cassidy: "I tried to tease my hair this morning, but I got too excited and had to sit down."

I almost decided not to say anything because I'm not really a concert reviewer but then again I'm not an actual movie reviewer, so I decided to go for it. And the night was too unforgettable (for better and for worse) not to say something. 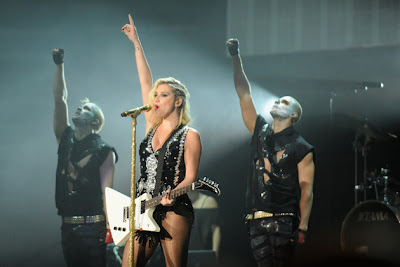 After the briefest of brief opening acts (a dance crew that morphed into an awful techno band with dancing halfway through but only lasted about 8 minutes), the screens darkened, Ke$ha's voice came on the speakers, and we were abruptly thrust into a psychedelic wonderland of animals and warriors.

We honestly had no idea Ke$ha wasn't the final act of the night (or maybe we were hoping) so we were taken mightily by surprise and hadn't had sufficient time to emotionally prepare ourselves. I don't ever do this, but there were tears in my eyes. Ke$ha is an icon of fun, love, and bravery. She's not afraid to be a pop musician. She embraces it wholeheartedly and uses it to spread her message of love, acceptance, and tolerance.

"Can't we all just fucking love each other?"

I wouldn't dare censor Ke$ha, though I do censor myself.

The show was an hour long cavalcade of drums, guitars, costume changes, inflatable whales, giant legs sticking up from the stage, a pink hippo, eyeballs, and jungle gyms.

She sang an unreleased song (Machine Gun Love) and commanded us to record it on our phones. She told us a story about getting naked at a queer bar. She used a tap dance production number to introduce Blah Blah Blah. She wore a chastity belt and used a buzz saw on her crotch, shooting sparks across the stage. 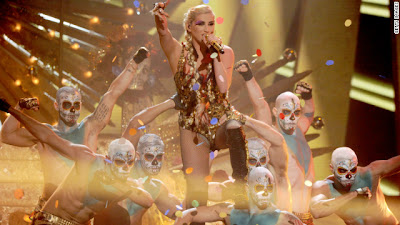 Yes, Ke$ha is a pop princess, but she's also a rock 'n roll queen. Her songs were recreated on electric guitar (Blow was nearly unrecognizable and hardcore), she ditched the autotune (out of necessity, one would suppose, but she can handle herself), and even grabbed a guitar sometimes herself. There were dance breaks, Ke$ha drum solos, and dirtified lyrics (Blow - "Tonight, we're taking names / cuz we don't fuck around." Gold Trans Am - "Get in my.... vagina").

"The first time I was ever at the Hollywood Bowl, I was a little kid sitting in a guitar case as my mom played onstage. The second time, I was with a guy named Harold and we snuck in to see the Rolling Stones. The third time, I had eaten too many mushrooms and was kicked out because I took off my pants. I'm so excited to be here tonight, I have so many weird and wonderful memories here."

Ke$ha is the dance commander + she commands you to dance.

I want to rate this show a perfect 10 like the good little fanboy I am, but two things are holding me back. One, Pitbull unfairly ate her set time (more on that later), and the performance felt truncated. I'd rather see her on her own headlining tour, though it was an honor to see her at all.

Two, there was a palpable tension between Ke$ha and her touring partner. She did not mention Pitbull's name a single time in her set and he only mentioned her offhandedly as an opening act. They never once appeared onstage together. Her obvious distaste at being paired with him (whoever made that decision is hopefully working at a Dairy Queen now) and the impassivity of the Pitbull fans in the audience led to a devil-may-care attitude that actually worked within her show, but there was something decidedly uncomfortable about the whole thing. 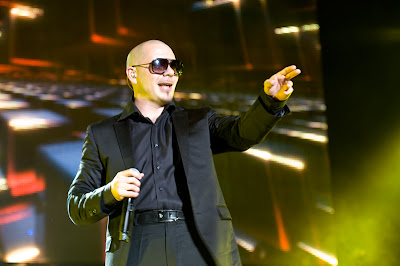 I really don't know what to do about this one. Before Pitbull came on, I told Cassidy. "Let's be nice. The Pitbull fans were buzzkills who took the fun out of our show, let's at least be courteous and not do the same to them." Plus, I even like a lot of his songs, although I've never considered him a good writer. I enjoy his raps for their absurdity and view them kind of like my beloved 80's slasher movies. Not good in any way, but they try so hard to please you that you like them anyway.

We survived about half an hour into his 80 minute set before sitting down in indignation. A Top 40 enthusiast might note how Pitbull is what amounts to the featured rapper on most of the songs he performs, even the ones on his own albums. Oh, he'd do his rap part alright. It was there. But he played full recordings of the other artists singing the rest of the song. And he didn't sing along. He didn't freestyle underneath. He just stood there and pelvic thrusted. And when he wanted to mix it up, he'd swivel his hips.

And then he started playing songs that weren't even his. And again. He wasn't covering them. He wasn't freestyling. He wasn't adding anything to the songs, he was just playing recordings to fill the 80 minutes he stole from Ke$ha. While pelvic thrusting.

I swear there was a period of ten minutes where he didn't even rap at all. A solid 25% of the show was this BS right here. 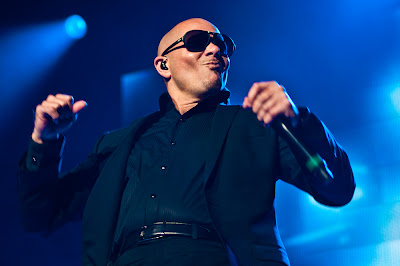 Good job, Pitbull. You got people to pay $80 for this. Now take off those freaking sunglasses.

I know Cassidy and I swore not to be buzzkills, but it was beyond boring and we had parked in the stacked parking so we were held captive until the end of the show with nothing to do but sit back and think about how terrible his lyrics really are. They're survivable on the radio, but when you're tied down, ears open Clockwork Orange style, they're pretty unbearable. I don't trust my night in the hands of somebody who thinks that Tonka trucks and Holiday Inns make for compelling songwriting.

I mean, I'm not exactly defending some of Ke$ha's lyrics, but her songs are at heart a knife edge satire. Pitbull believes 100% in what he's saying.

"I'm a genius / I mean brilliance" - Feel This Moment

At two separate points, he just stood there shouting out a list of countries. In between songs, he'd spout his incoherent pseudo philosophy about turning negatives into positives (obviously something he'd thought up long ago and found it so brilliant he just kept going with it) and at one point told us:

In June. I think he mixed up his script with the New Year's Eve show.

You wanna know the worst part? His fans lost their freaking minds. They went CRAZY.

Now, I don't think it's fair to judge people on the music they like. I don't hate, dislike, or even mildly judge anybody for being a Pitbull fan. I'm not one myself, but I can see the appeal. And clearly I'm in the minority for thinking his show was insipid pabulum. I'll just have to accept that his popularity is one more entry on a list of inexplicable things that I may never understand about the world. 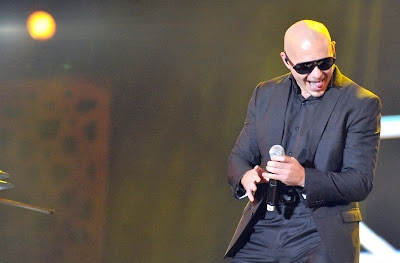 I can't find any other pictures that don't look exactly like this one.

Ke$ha sang about sexual liberation and freedom to be yourself. Pitbull wants you to take you to a hotel room and crack open your treasure chest.


Ke$ha: I love it here in LA. I've lived here a lot of my life, I have a lot of memories here and I love the people. Thank you so much for coming and supporting me.

Pitbull: Los Angeles, you are my target market!

OK, a break from the invective. There were enjoyable parts of the show. Unfortunately, they were the parts where Pitbull wasn't actually doing much. See, the Los Angeles show was a special night, and sometimes Pitbull turned off the recordings and brought out a special guest.

Marc Anthony came to sing his hit collaboration with Pitbull.

Jennifer Lopez performed and yes, she has abs of steel.

Chris Brown was also there, but I'm not gonna comment on that.

The final song of the night, "Give Me Everything," was a avalanche of stagecraft, with smoke pouring from every direction, confetti cannons, a laser show, and a full firework pyrotechnic display. You couldn't even see Pitbull through the haze. It was my favorite part of the night.

"Thank you to my band and my guests, without them there's no Pitbull."

There's hardly a Pitbull as it is.

Also, somebody wearing glitter was assaulted in the parking lot on the way out. I'm just saying that would never happen at a Ke$ha concert.
Word Count: 1656