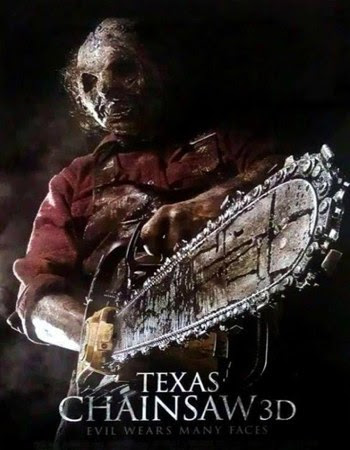 Year: 2013
Director: John Luessenhop
Cast: Alexandra Daddario, Tania Raymonde, Scott Eastwood
Run Time: 1 hour, 32 minutes
MPAA Rating: R
Before we begin, let me share a little context with you. Texas Chainsaw 3D is a landmark film for me. It is the first slasher sequel that I have been able to see in the theaters and I am so eternally grateful it lived up to my expectations.
My expectations were that it would be outrageously stupid, but that’s really beside the point.
Texas Chainsaw 3D has a laughably low estimation of the intelligence of its audience. It is the most continuity-starved slasher sequel that I have ever laid my eyes on, and I have seen Jason Voorhees go from being cremated to buried in a coffin to a dead child in the sewers of New York to a miraculously adult psycho being held in the not-too-distant-futuristic Crystal Lake Research Facility. I’ve watched Laurie Strode go from being the dead mother of a 5-year-old girl in Illinois to the headmistress of a California boarding school with a teenage son and I’ve taken this all with a certain air of grace. however, the license this movie takes with the Leatherface timeline is completely unacceptable.
The movie opens with a series of shots from Tobe Hooper’s original 1974 Texas Chainsaw Massacre, showing Leatherface as he brutally (and near-bloodlessly) murders four hapless teenagers, cheered on by his three (male) family members.
Our movie picks up shortly after the lone survivor escapes when group of rednecks returns to the house to wreak bloody vengeance on the Sawyer clan. Evidently this franchise has sat far too long in the back of some producer’s closet, because moths have chewed giant holes in the plot, which at the one minute mark already begin to rear their ugly heads.
This film has the gall to claim that not only was the Sawyer family a large clan (nine or more by my counting) of men, women, and children, but also that Leatherface (mind you this takes place hours after the events of the first movie) is eight years old.
Eight. Effing. Years. Old. They literally showed footage of him as an adult man over the opening credits mere seconds before. To fully appreciate this movie you don’t have to so much turn your brain off as completely remove it and set it on a cool shelf as far away from the theater as possible.
Anyway, they shoot and/or otherwise dispatch the Sawyer clan, burning down the house in the process. One of the rednecks steals a baby from the scene of the crime (just go with it), his wife trailing behind him asking “Can we keep it?” like a child fawning over a puppy. This scene is absolutely unpleasant to watch, but not in any sort of meaningful-to-the-narrative way. You kinda come out of it just hating everyone.
Anyway, skip to modern day, and the child has blossomed into Heather Miller (Alexandra Daddario), our sweet young pair of boobs - I mean, protagonist. 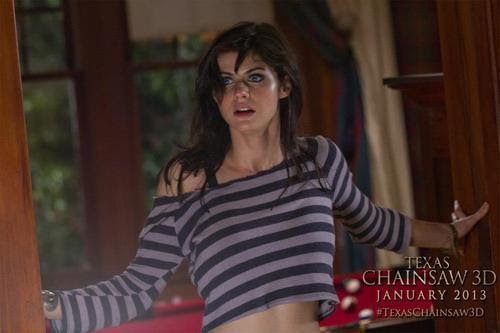 She wears this for 2/3 of the movie, and when she finally changes it actually gets worse.
Anyway she and her boyfriend (Tremaine “Trey Songz” Neverson), her best friend (Tania Raymonde) and her new beau (Keram Malicki-Sánchez) are going on a road trip to New Orleans for… reasons. But first they must stop by her grandmother’s estate in Texas to sign off on some papers. Her grandmother, who she didn’t know existed until now - she is positively grumpy to learn that she was adopted - has died, leaving her the house. They pick up a friendly (read: totally gorgeous) hitchhiker (Scott Eastwood) on the way to increase the amount of Expendable Meat and away we go.
Needless to say, the kids should have seen it coming. Numerous townspeople share knowing glances about the Carson Estate. Ignoring her lawyer’s repeated warnings to read the letter her grandmother left her, Heather and Co. proceed to party it up in the mansion, drinking, playing pool, and generally being enormous d-bags.
After one of the boys discovers a secret room in the kitchen (“Hey, a butler’s closet!” - my new favorite line, because the kid nearly pees his pants in excitement) with a lovely attachment wine cellar/murder lair, Leatherface (Dan Yeager) is released and makes quick work of their tender teenage flesh.
This all happens fairly early in the movie, and the plot unwinds in an inscrutably relaxed and convoluted manner, proving once again that nobody within the borders of Texas is to be trusted, period. I’d hate to spoil the ending, because it is deliciously daft, so I won’t venture further from this point.
Anyway, the hack-and-slash is what’s most important, right? The young actors are competent but forgettable, and Trey Songz is clearly only in the film to see how many of his own songs he can get the producers to play in the background.
The cinematography actually has something interesting to offer, most notably a throwback to the original movie’s opening sequence of flashbulbs revealing, in small chunks at a time, a full tableau of horror. While this is exciting and dynamic, whatever favor it curries is completely blown in a scene where Heather pores over some newspaper clippings. Single words from the clippings appear, blown up to fill the entire screen, in a series of shots that is uglier than any of the gore the movie throws at us.
Speaking of the gore, that’s what we all came to see (well, hopefully, cuz if not, I’ve got bad news for you) and the film mostly delivers. In true Texas Chainsaw fashion, the camera tends to cut away before things get too nasty, but there are some lovingly rendered chainsaw shots that will appease any voracious gorehounds. 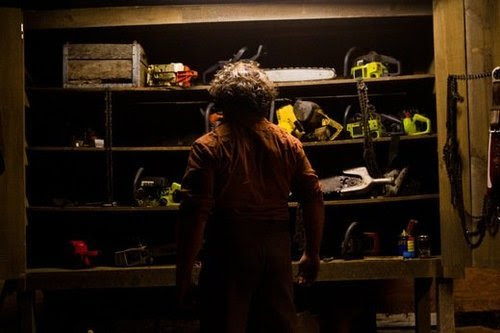 Of course he has 9 million chainsaws. Always be prepared.
You may have noticed that I have not yet written about the 3D aspect of the title, to which I respond “You clearly haven’t seen the film.” Texas Chainsaw 3D makes as little use of the technology as it possibly can, as if it is almost actively avoiding the gimmick that is central to its success. The audience is begrudgingly given a couple shots of chainsaws cutting through doors and such, but what with the abundance of sharp and pointy objects in the house, very little use is made of them in three dimensions.
It’s quite sad, to be perfectly honest.
Despite not at all living up to its title, or to the massive reputation that the Leatherface name carries with it, this is still a tight, fun, little slasher flick. The gore is satisfying, the actors are young and attractive, there are some cool references and cameos for series fanatics, and it contains an amusing scene where a cop enters a house holding both a gun and an iPhone 5 because screw you it’s 2013.
Body Count: Leatherface has a paltry 4 victims, but the body count actually stacks up to around about 24 people killed throughout the course of the film.
TL;DR  Texas Chainsaw 3D is brilliantly stupid, but good fun. A bloody good time with not even a shred of good sense, and one of the slasheriest slasher flicks to come out this century, which is good enough for me.
Rating: 4/10
Should I spend money on this? Don’t waste your hard-earned green on the 3D charge. However if you’re wanting a fun way to spend a Friday night, look no further. Just make sure to grab a 2D showing, you’re not missing anything. I promise.
Bonus Round: Hunt for Plot Holes (Mild spoilers ahead)
If you find any that I missed, feel free to let me know, let’s see how many we can tally.
Word Count: 1568
Reviews In This Series
The Texas Chain Saw Massacre (Hooper, 1974)
The Texas Chainsaw Massacre 2 (Hooper, 1986)
Leatherface: The Texas Chainsaw Massacre III (Burr, 1990)
Texas Chainsaw Massacre: The Next Generation (Henkel, 1994)
The Texas Chainsaw Massacre (Nispel, 2003)
The Texas Chainsaw Massacre: The Beginning (Liebesman, 2006)
Texas Chainsaw 3D (Luessenhop, 2013)
Leatherface (Bustillo & Maury, 2017)
Also sprach Brennan at 12:08 PM