And To All A Good Night


Well, the Christmas season has arrived and holiday cheer is getting all up in our grills. Soon it’ll be 2013, and thus begins the delicious week of 2012 wrap-ups. I really, truly, unabashedly love end-of-year wrap up lists. Always have, always will.
Anyway, my contribution to the lot isn’t due til next week, so in the meantime, let us celebrate Christmas Eve with a sort of meandering Christmas topic tonight.
First item on the agenda: Christmas releases.
As with every year, December 25th finds itself inundated with holiday releases and this year’s fare exemplifies the holiday spirit like no other. There’s Django Unchained, the bloody Tarantino slave drama, Les Misérables, the musical epic about the French Revolution, and… well, let’s not talk about the other one. That makes for some stirring Christmas cinema if I’m not mistaken.
All kidding aside, I am beyond excited for the Les Mis release. The reviews I’ve looked at so far seem to be across the board, but these musical movies tend not to do very well in the critical eye. My beloved Mamma Mia! was reviled, Rent was universally panned, and while these might not technically be considered good movies, that’s not really the point, is it? 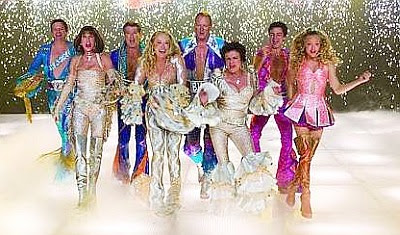 Glitter. Glitter is the point.
The thing about Les Mis though, is that instead of pre-recording the vocals in a studio and lip-syncing on set, all the actors actually sang in camera, which is quite unprecedented and in theory leaves much more options open in terms of emoting and expression.
It’s a grand experiment, much along the vein of The Hobbit’s 48 fps frame rate, and it’s more about trying the technique than the actual movie itself. Regardless, Anne Hathaway is going to kill, and try as you might to convince me otherwise, I absolutely adore Amanda Seyfried and am thoroughly prepared for this movie to wow me, even if, cinema-wise, it really isn’t that great.
And to be brutally honest, I don’t give a hoot about Tarantino’s new film, but I appreciate the fact that it exists and I’m sure fans of his will find much to delight in.
Nothing says Christmas like a blood-soaked camera lens, and I say that with absolutely zero trace of irony. I have recently begun my second annual winter season Christmas Slasher Festival, and it is going swimmingly.
Below you will find mini-reviews of the two most recent offerings. And for the rest of you, have yourself some very happy holidays (or some joyful non-denominational protests)!
Satan Claus 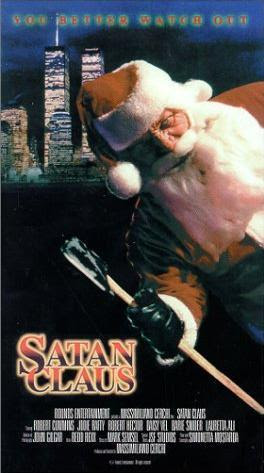 Year: 1996
Director: Massimiliano Cerchi
Cast: Robert Cummins, Jodie Rafty, Robert Hector
Run Time: 59 minutes
MPAA Rating: Unrated
This film isn’t so much a movie as it is an hour-long experiment in seeing just exactly how dark the lighting can be in a scene without actually just being a black screen. All but one or two of the scenes in the movie are shot in such complete, utter blackness that it is nearly impossible to tell if the scenes are taking place indoors, outdoors, or even on this mortal plane.
This absurdly short film follows the NYPD (which is comprised of three employees - the police chief and two officers) as they investigate a string of murders by a crazed man in a Santa suit who is rampaging on Christmas Eve.
The effects are laughable, the plot is incomprehensible, the shots are muddy and the characters virtually indistinguishable from one another. In fact for the longest time, I wasn’t even sure if the protagonist was white, black, or Hispanic. His face was kept under a cloak of perpetual darkness.
Luckily the movie is short, sweet, absurd to the point of hilarity, and heavily features a random picture of Bill Clinton haphazardly taped to the wall in the police station.
Actual dialogue from the film: (as Santa is brandishing an axe at a shocked victim) “Merry Christmas!”
Body Count: Who even knows? I know I wasn’t paying attention. And the information isn’t readily available on the internet because, for all intents and purposes, this movie does not exist.
Rating: 2/10
Jack Frost

Year: 1997
Director: Michael Cooney
Cast: Scott MacDonald, Christopher Allport, Stephen Mendel
Run Time: 1 hour, 29 minutes
MPAA Rating: R
Not to be confused with the heartwarming 1998 Michael Keaton film of the same name, Jack Frost follows the exploits of one Jack Frost, a killer whose execution delivery vehicle collides with a truck containing “genetic material,” transforming him into a snowman with a thirst for blood.
He returns to hunt down his old nemesis, the sheriff of the tiny town of Snowmonton (seriously). This movie is actually a pretty delightful slasher flick featuring some truly awful Christmas puns, a creative murder utilizing every part of a Christmas tree, a pre-American Pie Shannon Elizabeth being violated by a carrot, and not a flake of actual snow.
Seriously. For all its importance to the plot, the sleepy town of Snowmonton (which is right in the middle of their annual snowman building competition) looks for all the world like it could be smack dab in the middle of Arizona for all the snow it displays. A few strategically placed white blankets and some carefully iced windshields serve to move the plot along, but it’s hard not to notice that the town clearly hasn’t felt the tender caress of snow in quite a few months.
Sidebar: The Internet has just informed me that there is a sequel to this film. I will not rest until it is in my hands.
Body Count: 11
Rating: 5/10
Word Count: 953
Reviews In This Series
Jack Frost (Cooney, 1997)
Jack Frost 2: Revenge of the Mutant Killer Snowman (Cooney, 2000)