I’ve watched a buttload of movies that I have not yet talked about (in fact, six of them were in the same day - a new record for me), so I’m gonna knock ‘em out one by one real quick.
Leprechaun 4: In Space 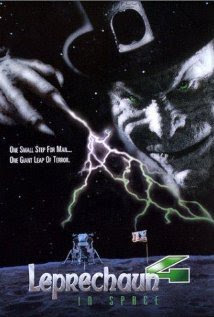 Year: 1996
Director: Brian Trenchard-Smith
Cast: Warwick Davis, Brent Jasmer, Jessica Collins
Run Time: 1 hour, 35 minutes
MPAA Rating: R
This movie got its start when, as a prank, a producer pasted a picture of the Leprechaun over Tom Hanks’ face on an Apollo 13 poster. That perfectly exemplifies the amount of thought that went into the making of this film. Brian Trenchard-Smith returns to direct his second film in the franchise, which is a fate I wouldn’t wish on even my worst enemies.
This movie doesn’t make as much of the “In Space” gimmick as the likes ofJason X and Co., but does feature some stellar bad-good scenes like the Leprechaun bursting out of a Space Marine’s penis, the diabolical Dr. Mittenhand, and an Irish magic-induced drag performance by the ship’s captain.
Pretty solid stuff right there.
Body Count: 8
Rating: 4/10
Leprechaun: In the Hood 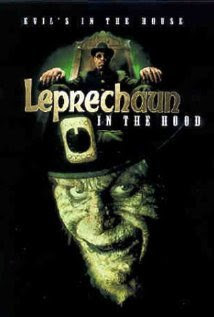 Year: 2000
Director: Rob Spera
Cast: Warwick Davis, Ice-T, Anthony Montgomery
Run Time: 1 hour, 30 minutes
MPAA Rating: R
It’s always a bad sign when they stop numbering these things.
This film follows our little Irish friend across the streets of Compton as he pursues a trio of rappers who have stolen his magic flute. The flute’s magical power seems to be that it makes audiences enjoy really awful rap, and the group is trying to use this to score a trophy at a competition in Vegas.
It’s exactly as uncomfortable as you would expect a movie by a white director that is chock full of black stereotypes to be. Ice-T’s character is named Mack Daddy, for crying out loud. This film also features a cross-dressing character, which is the only thing that resembles continuity in the entire series.
Body Count: 9
Rating: 5/10
Leprechaun: Back 2 Tha Hood 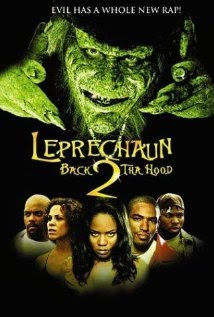 Year: 2003
Director: Steven Ayromlooi
Cast: Warwick Davis, Tangi Miller, Laz Alonso
Run Time: 1 hour, 30 minutes
MPAA Rating: R
This is (at the time of writing) the last film in the Leprechaun series, and it actually kinda doesn’t suck. A stoner gets stabbed with his own bong, the annoying skank gets what’s coming to her, and there’s a psychic that’s just a jumbled ball of clichés but at least they’re trying something new.
The Leprechaun doesn’t even show up in the main plot until about the half-hour mark, so we actually get to see some fleshed out characters that somewhat resemble real human beings. It’s kinda nice.
Body Count: 9
Rating: 6/10
Psycho Santa 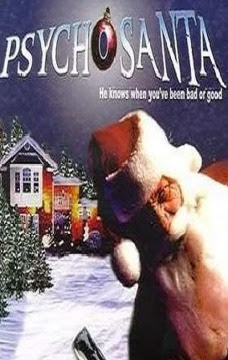 Year: 2003
Director: Peter Keir
Cast: Krystal Stevenson, Jason Barnes, Jeff Samford
Run Time: 1 hour, 21 minutes
MPAA Rating: N/A
I don’t even wanna talk about this one, what torture. The plot of the movie takes place in a series of flashbacks as a man tells his girlfriend the tale of the Psycho Santa. Essentially there are 4 vignettes, each more boring than the last.
In the first, we watch a girl and her friend have a sleepover in a cabin in the woods, which sounds like the perfect setup, but then nothing happens. One girl takes a shower and we get to see just how many body piercings a single person can hold. And then the other girl dances for about 6 minutes. Not even sexily. Just kind of mindlessly gyrating. Then it cuts back to the storyteller, who tells us that they were killed. We don’t even get to see it.
The second vignette follows burglars who sneak into a supposedly empty house, which turns out to be occupied by a blind woman. They let her go about her business. She’s blind so she doesn’t notice them. Then they proceed to drown her FOR NO REASON in a scene that lasts about three minutes and is just absolutely awful.
The third shows the Psycho Santa kill a young boy and his mother (props to the filmmakers for being brave enough to kill disabled women and children, I guess. It absolutely does not work.). Well, he slices the woman on the collarbone. Evidently this renders her completely immobile and wracked with pain, and she crawls toward a telephone that happens to be on the floor. For about seven minutes. Kill myself.
I’m so bored I don’t even want to talk about the fourth one. If this movie handled its pacing well with the plot it was given, it would have a 10 minute run time. And that would be about 5 minutes too long.
Body Count: 1 hour and 21 minutes of my life
Rating: 0/10
The Christmas Season Massacre 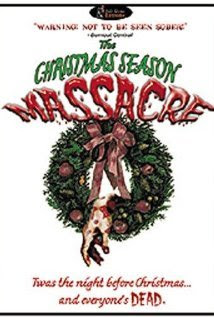 Year: 2001
Director: Jeremy Wallace
Cast: D. J. Vivona, Jason Christ, Chris Belt
Run Time: 1 hour, 10 minutes
MPAA Rating: N/A
This movie came in the same DVD bundle as the atrocious Satan Claus and Psycho Santa, but it was actually pretty funny. It’s clearly just a group of friends who got together to make a movie and it runs like amateur hour, but it follows a guy with an eyepatch decorated with a Christmas tree who kills his high school classmates in pirate themed ways in Christmastown, California, so it’s really not all bad.
God, sometimes I question my life choices when I write sentences like that.
Body Count: 9
Rating: 4/10
Silent Night, Deadly Night 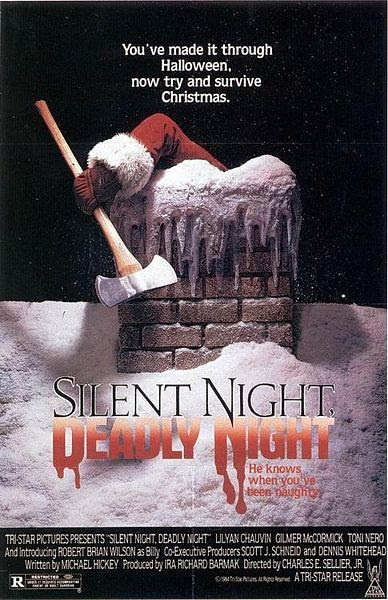 Year: 1984
Director: Charles E. Sellier Jr.
Cast: Lilyan Chauvin, Gilmer McCormick, Toni Nero
Run Time: 1 hour, 19 minutes
MPAA Rating: R
OK, this one was actually pretty great. It’s been nearly impossible to find, but the DVD just got released in the wake of its loose 2012 remake, Silent Night. I rejoiced much more than I should have.
This film got an unfair amount of flak for portraying Santa as a psycho even though in the film it’s clearly just a guy dressed as the Jolly Red Serial Killer. But moral tensions were high and this film got the axe, as it were, and barely saw the light of day until several years afterward.
However, it’s a solid slasher flick about a kid who watched a robber dressed as Santa murder his parents at a young age. He now views Santa as a punishing figure and after he is forced to dress as Mr. Claus for his job at the toy store and has a little too much eggnog, he seeks to punish those he deems naughty.
Featuring an appearance by scream queen Linnea Quigley, this film was great fun and has some actually disturbing sequences that still hold up to this day.
Body Count: 13
Rating: 7/10
Psycho Beach Party 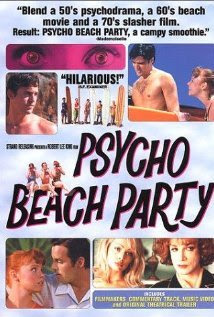 Year: 2000
Director: Robert Lee King
Cast: Lauren Ambrose, Nicholas Brendon, Thomas Gibson
Run Time: 1 hour, 35 minutes
MPAA Rating: UR
This film is basically what a Gidget movie would be like if there was a serial killer on the loose.
It features Xander from Buffy the Vampire Slayer, Aunt Zelda from Sabrina the Teenage Witch, and Amy Adams in her second feature film role.
The female detective is played by a man in drag, who uses a body double for a sex scene.
It is based on a play that this man wrote and starred in.
It also features a two gay beach bunnies struggling with their love for each other, one of whom is severely constipated due to stress.
It’s a deliriously absurd, campy mess and it is absolutely delightful.
Body Count: 4
Rating: 7/10
Word Count: 1311
Also sprach Brennan at 12:13 PM