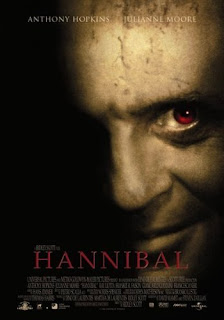 Following the success of the first entry in the saga of Clarice Starling and Dr. Hannibal Lecter (ignoring Manhunter, as is unfortunately so often the case), all was silent on the Lambs front for ten long years. However, following the release of the third novel in the Lecter series by Thomas Harris, Dino De Laurentiis decided to get the lead out and see if there was any blood to squeeze from that long-dormant stone.

He certainly pulled out all the stops, trying to make up for his embarrassment from allowing another company to make Silence of the Lambs after Manhunter proved to be box office plutonium. He got a hot cast: Gary Oldman, Ray Liotta, Anthony Hopkins resurrecting his iconic, Oscar-winning role. Jodie Foster thumbed her nose at the project, but the chick from The Lost World was up to taking on the mantle of that gorgeously chewy West Virginia accent. This cast was to be wrangled by Ridley Scott, an even bigger name than the original’s Jonathan Demme. What could go wrong? 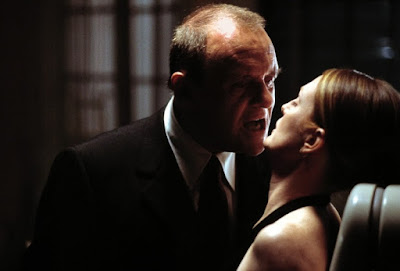 But more on that in a minute. In order to properly mock Hannibal (the drearily generic moniker worn by both the film and the novel it’s based on), one must understand the plot: It has been ten years since Clarice Starling (Julianne Moore, who is, shall we say, a smidge frecklier and more ginger than Jodie Foster) made a name for herself by capturing the Buffalo Bill killer. Following a botched drug bust, she attempts to regain her public standing by helming the continuing search for Hannibal Lecter (Anthony Hopkins), following evidence presented by the wealthy and disfigured Mason Verger (Gary Oldman buried beneath a pile of Crypt Keeper prosthetics), the cannibalistic psychiatrist’s only surviving victim.

Unbeknownst to her, one Rinaldo Pazzi (Giancarlo Giannini) of the Italian Questura has located the mad doctor in Florence and has chosen to shirk the FBI in favor of Verger’s sizable reward. While Clarice sits in a dark basement placing her thumbs in various orifices and thinking, “Gee I hope somebody finds that Hannibal guy,” the Florincian drama endlessly unspools until Hannibal elects to pay a visit stateside. Clarice tries to catch him while her ambitious rival, Paul Krendler (Ray Liotta) attempts to shut her down, having been paid off by Verger, who wants Hannibal alive. All the better to be eaten by pigs. 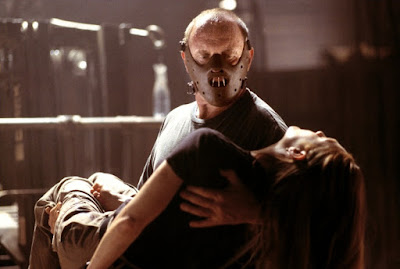 Let me put it this way: Hannibal is probably the worst decent movie I’ve ever seen. Underneath a sheen of mostly competent visuals and performances lies a rotted-out core, and the stench permeates everything around it. A problem penetrating to the very center of Hannibal is a petty one, but a humdinger nonetheless: Julianne Moore. It would be tough but not unreasonable to get over the fact that they didn’t even bother to dye her hair or that she’s a smidge on the younger side of a decade older than Jodie Foster.

However, the film forces the conceit that Starling’s conversations with Lecter were recorded without her knowledge (an idea completely missing from the novel, for good reason), with the effect that we are forced to hear Moore’s voice clumsily pasted over dialogue from the infinitely superior original film like a child’s macaroni art. This humiliating display forms the chink in Hannibal’s armor, allowing a noxious wave of inadequacy to gush out and flood the rest of the film.

Hannibal is like a jigsaw puzzle of film-breaking problems, not the least of which is shunting Clarice and the FBI aside for a miserably extended stretch while Hannibal and the personality-free Pazzi dodder around Florence discussing art history. While the score that sounds more like the THX logo hum and Gary Oldman’s squawking performance as he scrabbles his way out from under his Master of Disguise turtle makeup duking it out for irritant supremacy, a more insidious army of flaws assembles in the background. 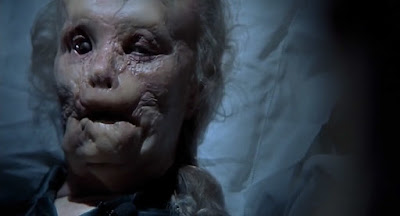 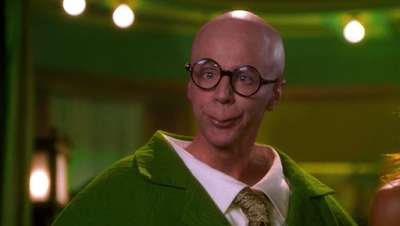 But let’s hit pause on that for a sec. I want you to see that I don’t kid around with my metaphors.

Before we dive back into the dumpster, why don’t we all massage out some of that nerd rage by discussing what’s actually good about Hannibal. Don’t worry, this won’t take long.

In all fairness, the murder sequences are of a piece pretty damn well constructed, especially in a deliciously nasty shot where a cell phone smashes to the ground, leaving us unprepared for the entails that spill down after it. There are a couple cool reversals at play and Hannibal’s tenure in Florence is marked by some intense, unique lighting that makes great use of Sam Raimi’s concept of “scare slashes,” or beams of light that only reveal a thin sliver of action. Generally, all the shooting around Hannibal is pretty incredible, paying him the respect he deserves.

Unfortunately, that same favoring of Hannibal Lecter is the villain’s downfall. His appearance in Silence of the Lambs is concentrated due to the short time he spends on screen, allowing him to maintain an impenetrably evil presence. Here we see the much dreaded cannibal going shopping, talking on a cell phone, and attending the opera. Keeping Hannibal in the spotlight overexposes him, taking the mystery out of his existence and diluting the cunning menace he represents. Hopkins is still an incredible performer, but even he can’t draw tension out of (urp) Hannibal on a carousel. 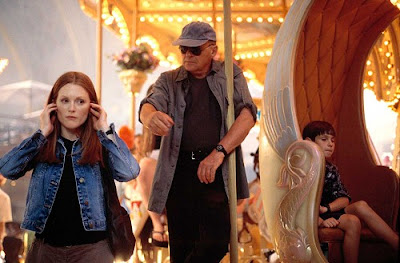 At this point, a plastic horse would be a scarier bad guy.

Really, at its core, Hannibal is profoundly silly. Silly horror films can be great at times, but coming in the franchise it does, it turns out to be nothing less than insulting. Scene after scene cascades from the gaping maw of this film, each more laughable and more tragic than the last. I won’t go into detail, but trust me when I tell you that the only terrifying thing about Hannibal is its narrative incompetence.

Sure, there’s still Anthony Hopkins and a cocoon of successful cinematography, but Hannibal is a surefire wash. I was warned against this film but watched it anyway due to its franchise connection. So I hardly expect you to heed my warning against this film. But please, if you ever feel the need to visit the twisted tale of Carousel Hannibal and Ginger Clarice, come armed with your sharpest sarcastic barbs.