Twitch of the Death Nerve 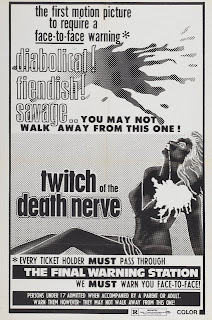 A girl with her dress half off is running through a wooded area, stealing glances behind her as she is relentlessly pursued by a psycho killer brandishing a large and exceedingly sharp knife. Is this some late Friday the 13th sequel? A forgotten slasher from the makers of Don’t Go In the Woods or Cheerleader Camp? Not by a long shot. It’s Mario Bava’s 1971 Italian masterpiece, Twitch of the Death Nerve.
A horror film by any other name would taste just as bitter, and it’s a good thing too – this movie holds the record for most release titles ever. It is also known as Bay of Blood, or in Italian Reazione a catena (Chain Reaction) and Ecologia del delitto (The Ecology of Crime), and at one point was dubiously repackaged as The Last House on the Left – Part 2 despite coming out a full year before Wes Craven’s grindhouse debut. TotDN is a vicious and beautiful giallo film from the genre’s most prominent director, so it’s no wonder it was constantly rebranded to try and reach as many audiences as possible.
The movie opens as many gialli of the time tended to – with a brutal murder perpetrated by a mysterious black-gloved killer. In this case the victim is the wheelchair-bound Countess Federica (Isa Miranda) who is hung from a noose holding her at a 45 degree angle above the floor, her wheels spinning frantically then slowly clicking to her stop, matching the beat of her heart.
Although it is already a particularly artistically sound and stylish murder sequence, there is nothing to distinguish it from the pack of its cinematic peers. Until. The unsuspecting black-gloved killer is stabbed in the gut by an unseen assailant as the score soars and the movie proper begins. Not since Janet Leigh’s untimely death in the first act of Psycho had the audience’s expectations for a film been so wildly subverted. The black-gloved killer, a staple of the genre, was dead. Everybody (and there are quite a few bodies on hand here) is a suspect.
The countess’ estate is now up for grabs, and soon her beautiful bayside property is swarmed with greedy friends and relatives. This film is credited for many aspects of the 80′s slasher movement, among them the idea of “the higher the body count, the better,” and the sheer mass of characters in this film is a credit to that theory. In the main cast alone we have the countess’ daughter and her husband, a crooked lawyer and his mistress, a bug collector and his wife who live on the property, and a local fisherman (who is unforgettably introduced in medias biting the head off an octopus). Not to mention the four teenagers who break into a house by the bay for some good old-fashioned party time.
The DNA of later films like Friday the 13th (and especially its sequel) is heavily apparent, especially in the teen scenes. A girl goes skinny dipping alone in the bay. The boys are killed immediately while the girls last longer, being stalked and ultimately killed. Two death scenes are directly lifted by the F13 franchise, namely an axe to the face, and a couple who gets shish kebabed mid-coitus. Also one of the suspects, the sadistic bug collector is vehemently anti-sex.
It’s no question that this film is an early ancestor of everything I hold dear, but it is miles above its progeny. Twitch of the Death Nerve is ethereally beautiful, starting with the exquisitely rendered death scenes. It is very clear that Bava wanted his film to be memorable not only for its brutality but for its artistry. Shocking, vicious, vibrantly colorful, and well-composed, the deaths last much longer in the memory than any of the machinations of the plot. This is also a benefit because the film suffers from the characteristically perplexing storylines of Italian cinema at the time, trading narrative coherence for sensory bombardment.However, blood and guts aren’t the only thing Bava does right visually. The film is full of overwhelmingly beautiful nature shots as we explore the entirety of the bayside property, and there were editing cuts so phenomenal that I gasped the first time I saw them.
Twitch of the Death Nerve is a splatter film with unnecessary nudity, paper-thin characters, and an incomprehensible plot. And Twitch of the Death Nerve is art. There is no horror film (and no film in general, even) that I would more readily bestow that title to.

TL;DR: Twitch of the Death Nerve is the grandaddy of all slasher films. It is bloody, brutal, and ethereally beautiful.
Rating: 8/10
Should I Spend Money On This DVD? If you can find it for cheap. Good luck. No joke, I spent $50 on a grade-A copy of this movie.
Word Count: 825
Also sprach Brennan at 4:50 PM