CinemaBeach: I Lost My Mind In San Francisco 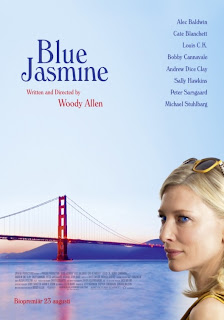 Blue Jasmine barreled onto the scene, giving Woody Allen the all-time biggest box office debut of his career and sweeping up critics in its wake, but now that the tide has settled, a closer inspection reveals that it’s not all it’s cracked up to be. Not that it’s not a good movie, not by a long shot. Blue Jasmine has a strong sense of style that shines under the hand of a veteran director. The cast is mostly superb and it is never boring, but it has big ideas about class divisions and interpersonal relationships that never really crystallize by the time the credits roll.
Cate Blanchett plays Jasmine, a wealthy socialite whose husband (Alec Baldwin) is arrested for shady corporate dealings. She loses her house, her money, her stepson, and her husband and has to move in with her sister Ginger (Sally Hawkins), a working class city girl whose romantic life consists of a revolving door of lowlife guidos. Having never held a job, she’s not quite sure what to do with herself and after several unsuccessful ventures, she manages to convince the worldly (and handsome) Dwight (Peter Sarsgaard) that she’s an interior designer, thus beginning a professional (at first) relationship.
Her road has frequent ups and downs (literally – her life is a haze of Xanax and high-functioning alcoholism) and we encounter frequent flashbacks to her life before. The higher the peak, the less we see. The harder the fall, the more time we spend in Jasmine’s dreamland of bubble baths and diamond bracelets.
Taking on what could be a deliriously campy role (Jasmine has a habit of talking to herself as if she were still at an extravagant dinner party) and moderating it perfectly, Blanchett is a rock in a briskly moving river of fast-paced cuts, flashbacks, and branching side plots. Baldwin, Sarsgaard, and Hawkins are quite at home in their roles as well, as is Louis C. K. in a surprisingly rich turn as a bumbling sound engineer. Unfortunately the movie suffers under the lesser efforts of a bloated supporting cast (Andrew Dice Clay as Ginger’s ex-husband is a particular disappointment).
Various thematic threads are picked up, held onto for a while, and summarily dropped as the movie spans across such topics as reinventing oneself, the hypocrisy of the laments of the rich, and the futility of trying to change someone who is already lost. Each of these themes valiantly vies to anchor the film and each of them is quietly buried and forgotten.
Disregarding the subtext, the text itself is a little shaky on its feet with its share of minor but niggling plot holes. The largest of which is that Jasmine is apparently so utterly computer illiterate that she can’t even Google “online design school,” even after months of computer classes. One could argue that she is deliberately causing herself to fail because of her guilt over her husband’s fate but one would be reading far too much into a film that doesn’t quite find its thematic footing throughout its 98 minute run time.
Blue Jasmine is definitely worth seeing if only for Blanchett’s wonderful performance, but remains in the mind about as long as a pleasant dream upon waking up.
TL;DR: Blue Jasmine is interesting and pretty but empty.
Rating: 7/10
Should I Spend Money On This? Yes, but only because Cate Blanchett is a treasure.
Word Count: 590
Also sprach Brennan at 7:19 AM