Wow, we really have been slacking. It's almost like jobs and school and stuff are more important that watching confusing Japanese ghost stories. As if.

Anyway, this installation of my award-winning J-Horror series is truncated for two reasons. First, it's all we've had time for in the past couple weeks, what with me living back in Anaheim and Sergio trying to maintain three separate schedules. Second, this series finishes off the Grudge franchise, at least for the films available in America.

I'd love to get my hands on the original Ju-On: The Curse and it's sequel but it's not exactly a cheap undertaking.

At this point in the retrospective, the Grudge series has taken a turn for the worse. The films to follow are the only ones released with no involvement on the part of Takashi Shimizu, the addled auter of this whole affair. For better or for worse, his presence kept the Grudge films grounded in the same universe and his absence sent the franchise careening off into even more bizarre regions. 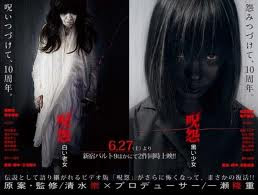 Not content with its already super weird lineage, Ju-On took it one step further with White Ghost / Black Ghost. In honor of the tenth anniversary of the series, two short films (both one hour long) were released in cinemas back-to-back.

Instead of focusing on the murderous Saeki family, these are "spirit sequels" that merely take place in the same universe as the other movies. And as shaky as Shimizu's grasp got over these films as the years went by, the loss of his guiding hand sent Ju-On (how do I put this gently?) straight down the pooper. 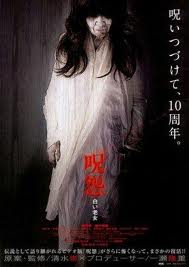 A girl is haunted by the ghost of her childhood friend who was murdered by her brother.

This film opens with the same placard as the rest, with all its mumbo jumbo about "Ju-On is a curse born of rage" and yadda yadda, but with the added spin of it causing a mysterious cursed stain (which was only seen in one other film - Ju-On: The Grudge 2). It doesn't take too long for the screen to go dark and the name of our first victim appears on the screen. Yes, we're still going episodic here. Except this time they're all Christmas-themed for some reason (even the ones that take place seven years earlier).

There's some Ju-On-y joy to be had in a haunted cassette tape, but mostly this effort is just confused. No, I didn't say confusing. The movie itself is confused about what it's doing.

The director and editor evidently were both MIA during the final cut, because the sequence of shots in each vignette is nonsensical and at one point a character teleports from a kitchen to a bathroom. The movie is also very unclear as to which character wore the little yellow hat it so desperately wants to impart meaning on as a little girl.

Also a girl kisses her boyfriend right after he throws up. And the ghost is now an old lady carrying a basketball. So yeah, there's some Japanese B-movie charm here, but the effects budget would make a TV movie cry and it's ultimately a waste of time.

I sat there suffering for what felt like about a week and couldn't even muster the fortitude to watch the second half immediately after it ended. 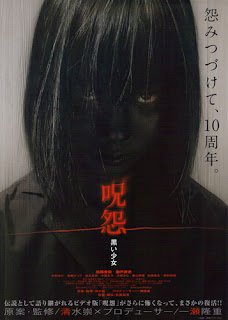 A nurse is haunted by the same specter that is making one of her patients very sick.

Better than the first, by the bredth of a stringy black hair.

Ju-On: Black Ghost is still by no means any good and it doesn't hold a candle to even the worst of its predecessors, but it is a little more stable than White Ghost.

That said, it still features a hospital scene that takes place in what looks uncannily like an abandoned elementary school, music that is oddly reminiscent of the THX logo, and a scare sequence (the best in the movie) that is stolen straight out of Ju-On 2.

Although the use of lighting in this one is actually effective more than it isn't, the black ghost's mask is embarrassing and Toshio's inevitable cameo is even weirder (an unnecessary side character asks him if he's seen his dog and he meows).

Still hella boring, but at least I got through this one with minimal damages. 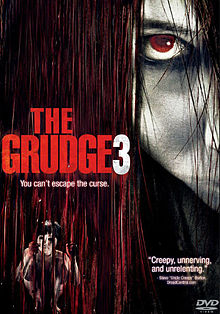 Kayako and Toshio are at it again, this time in a Chicago apartment building.

Evidently, none of these films wanted to let Shimizu's brainchild be, as The Grudge 3 also opens with a modified title card, this time adding some nonsense about the curse being reborn.

The film opens with Jake (Matthew Knight), the survivor of the first film, being attacked in the hospital, which is apparently Kayako's second favorite place behind weird staircases. Evidently the Chicago apartment building where his family died is the new host location for the Ju-On curse (this film marks the first time that phrase is used in any movie in the series, as far as I can tell). The building's landlord (Gil McKinney, who is the poor man's Scott Foley, which is unfortunate because Scott Foley is already the poor man's Brad Pitt) is struggling to keep his tenants and his job while taking care of his asthmatic younger sister, Rose (Jadie Hobson). The middle sister, Lisa (Johanna Braddy) is mostly just content to screw around with her boyfriend (Beau Mirchoff) in the multitude of empty apartments.

So yeah, there's this curse thing. One by one, the remaining residents who have come in contact with the cursed apartment fall prey to giant images of Kayako (for the first time played by somebody other than Takako Fuji - Aiko Horiuchi appears to be attempting to either channel her or challenge her to a breakdance battle) crudely superimposed on what ever happens to be around - a painting, a pane of glass, you name it.

Speaking of cast changes... Toshio. My baby. The ever-present ghost child is now played by Shimba Tsuchiya, who looks every bit of five years too old. Toshio has been reduced to a lanky preteen who just shouts his name at people like he's a Pokémon.

I've actually spent much more time on the plot than I'm used to, mostly because it is the only strength the movie has going for it. This is the first Grudge film to feature one main storyline that progresses in chronological order and that is a blissfully welcome change. What's not welcome is the embarrassing amount of unscary scenes involving a Mr. Potato Head doll or Kayako doing everything in her power to be Samara Morgan from The Ring.

The Grudge 3 goes on like this for about 90 minutes, then stops. Walking the delicate line between "hilariously bad" and "excruciatingly awful," it settles in at "ambiently terrible." It is by no means a good movie, but it is so deliriously and cheerfully dumb that it is tremendously enjoyable and the time just flies by. This is the first Japanese movie that Sergio actually stayed awake all the way through. For a movie so cheap and direct-to-DVD that is was filmed in Bulgaria, that is quite the accomplishment.

Let me throw down a couple sentences. Just try not to wring amusement from them: Kayako's sister Naoko (Emi Ikehata) comes from Tokyo to help the beleaguered family, reciting every line in what could only be an overwrought French accent. Lisa's reaction to things like her sister's asthma attack or being chased down the hallway by a pale ghost wrapped in plastic range from Mild Boredom to Asleep. In one conversation, Lisa is sitting in the background talking to her brother in the foreground and the focus shifts between each line. The camera work is likewise grossly incompetent, but I'll cut them some slack because I secretly suspect that the cinematographer was a Weeble Wobble. Lisa is locked out of the apartment when her brother goes all "Here's Johnny" on them, but she waltzes back in just minutes later to save her sister.

The Grudge 3 wouldn't exactly make a killing as a midnight movie, but it's certainly a lot of fun to watch happen across your screen for an hour and a half.

My favorite part of the night was during a scene where a doctor is showing Lisa a recording of a session with Jake. 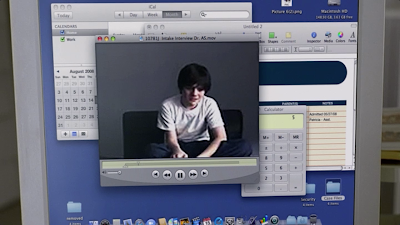 Sergio: "Why does she have calculator open?"
Brennan: "What series of calculations could a doctor have possibly been doing to come up with five?"

Champion Dialogue: "Things are happening and I think we should leave."