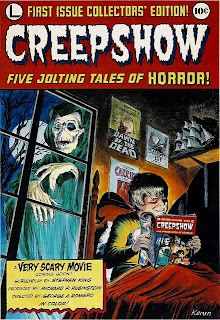 A five part horror anthology series based on the old EC comics like Tales From the Crypt directed by George Romero, written by Stephen King, and made up by Tom Savini, Creepshow is a classic horror fan's wet dream.

EC horror comics used to be all the rage in the 1950s, but declined in popularity due to a moral panic (gee, where have I head that one before?). Naturally, fans were outraged and Creepshow is at heart an enormous middle finger to the people who hoped those tales would never see the light of day again. These five stories and their overarching connecting story are all original stories (well, two of them were adapted from previously published shorts by Stephen King), but not a one of them would be out of place in the popular issues of yore.

Even more direct of a callback than the stories is the format itself. The editing, acting, framing, color design, opening titles, and even the poster are all deliberate homages to that lost style of storytelling. Think what Scott Pilgrim vs. the World did for classic video games, but twenty years earlier.

But let's let this clever, campy, and imaginative film speak for itself as we dive on into the individual stories. 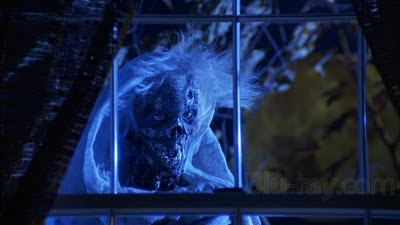 In this brief setup story, Billy, a young boy (Hill, Stephen King's son), is harangued by his father (Atkins) for reading filth like those daggum horror comics. He tosses his son's beloved entertainment in the trash, but a nighttime visit from The Creep allows Billy (and us) to revisit his favorite stories, and when his mail order voodoo doll comes in the mail, he puts it to good use.

As if the entire nature of the film wasn't enough, this segment fully drives in the "screw you, comics-haters" vibe. 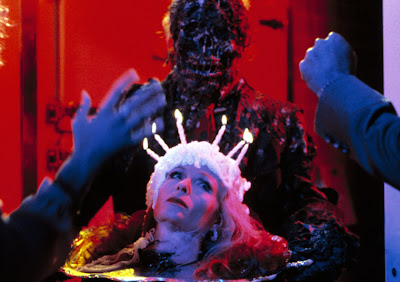 A fairly straightforward piece, this segment details the story of a murdered man returning from the grave on the anniversary of his death to wreak havoc on a party thrown in his honor by his killer and the family members that benefitted from his will. This sequence is the most similar to the slasher craze that had begun but two years before.

"Father's Day" features some of the loopiest comic strip sequences, especially during the flashback to the father's murder in which a car zooms in and out of two panels and images slash across the screen diagonally while framed by vibrant colors. In addition, the night is lit by a sheer blue glow that is reminiscent of the overwhelmingly technicolor masterpiece Suspiria.

The zombie makeup is pretty cheesy, as should be expected of a movie from this time period, but Savini is not one to mess around and details like the gooey tendrils holding the monster's skeletal jaws together are masterful.

"The Lonesome Death of Jordy Verrill" 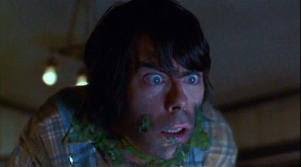 Verrill (King), a young hermit who presumably lives in the Deep South, discovers a meteor that has crashed into his back field and accidentally cracks it open, getting himself covered in a milky secretion. When he imagines the possible outcomes of his discovery, his wacky fantasy life is reminiscent of The Secret Life of Walter Mitty.

Unfortunately, the goo appears to have the adverse effect of turning him into a living plant and he is driven to madness by his transformation and the reappearance of his late father. King proves himself to be a strangely reliable actor, hamming it up in a role that reminds one of Jim Carrey in his prime.

Not to be outdone, this segment is also awash in bright technicolor light, this time green to represent, you know, the plants.

"Something to Tide You Over" 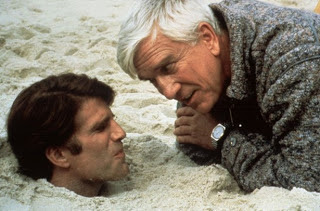 Whereas "Father's Day" was more of a slasher riff and "The Lonesome Death of Jordy Verrill" had a determinedly sci-fi bent, "Something To Tide You Over" definitely feels more like a precursor to psycho trap movies like Cube, Nine Dead, or the Saw franchise.

This segment is easily the most star-studded with Nielsen (Airplane!, Prom Night, The Naked Gun) playing a madman torturing his cheating wife (Gaylen Ross, who appeared four years earlier in Romero's classic Dawn of the Dead) and her young lover, played by Ted Danson (Cheers, Bored to Death) by burying them up to their necks in the sand and letting the tide wash in.

Naturally, the story doesn't end there as things take a turn for the supernatural, mostly lit in a vivid shade of aquamarine. 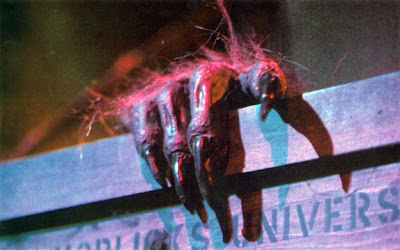 A janitor discovers an old crate sealed with chains tucked beneath an old staircase at the university. Its label would imply that it's over 170 years old and may contain artifacts from the Arctic Expedition. When he and a stuffy old professor open it and release the beast inside, his friend Henry (Holbrook) catches wind and must decided whether to detain the beast or utilize its frenzy to get rid of his overbearing wife (Barbeau).

This segment with it's "monster from the arctic" theme would seem to be an homage to John Carpenter's The Thing, released earlier that same year. This idea is cemented in by the crate's label - "via Julia Carpenter" - and the presence of Adrienne Barbeau who had previously worked with the director on 1980's The Fog, 1981's Escape From New York, even appearing The Thing itself in a small cameo.

This segment is the most thematically resonant, with the monster representing Henry's internal desires and rage, augmented by the garish red light that accompanies his dark fantasies and the monster's evil doings.

Tom Savini gets his best work in this segment with a fabulous clawing of a young student's face.

"They're Creeping Up on You!" 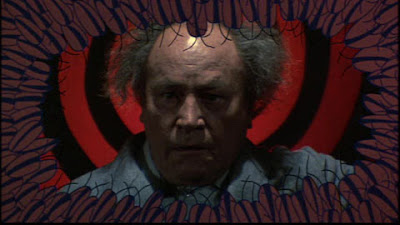 Wow, they really saved all their F-bombs for this one. E. G. Marshall (12 Angry Men) plays a callous businessman whose latest buyout led a rival to suicide. Not at all haunted by this, he is rather more worried about the vermin problem in his pristine penthouse apartment.

Cockroaches appears in larger and larger numbers as he does all he can to squash and spray in between shouting matches with his super. After a citywide blackout, the bugs swarm and overwhelm him in what is, at least to me, the most truly terrifying moment in the film.

Some of Creepshow's segments are more complex than others, but they all maintain the relative simplicity common to comics narratives as they parade a variety of horrors, blaring colors, and talented actors eating it up in supremely over the top campy roles.

Creepshow is horror distilled, perfectly capturing the essence of the childlike wonder of experiencing those EC spooky stories for the first time. The true definition of a cult classic, it's just a whole lot of fun, and the people working on this project were the best and brightest the genre had to offer at the time.

#5 "The Lonesome Death of Jordy Verrill"

#2 "Something to Tide You Over"