Ah, the 80's. The Golden Age of slasher films. For a horror fan, just thinking of the decade conjures up images of hockey masks, butcher knives, and fountains of blood galore. But bobbing just beneath the surface of the more well-known (or well-received) slasher greats is a whole mess of chum. I recently discovered this when I looked into doing a "Best of (Year)" slasher feature for 1985 and realized that I had only seen 2 of the 23 slasher films released that year.

I've seen over 100 slasher films, but I'd seen a paltry two in that year. I was mortified. I decided there and then to commit myself to watching every single slasher movie from the entire decade of the 80's.

This is harder than it sounds, for more than one reason.

First, over 290 slasher movies were released in that decade alone.

Second, the slasher genre can be particularly tough to nail down. Yes, there's the psycho killer with the big knife mowing down camp counselors. But what if instead of a man, it's a team of murderous scarecrows? Or a pirate ghost? Or what if it's an action flick dressed up as a slasher movie to get attention? What now? Using my keen judgement, I have compiled an alarmingly comprehensive list  of films ranging from straight-up slashers to slasher tinged action showdowns to other subgenres of horror that were clearly influenced by the almighty slasher.

It was decided that I would go through them by year, reviewing each film chronologically by release date and then organizing a sort of End of Year compendium detailing the trends, the best and the worst, and giving a general history of where the slasher film was at that point in time. 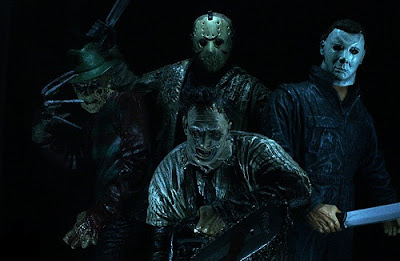 Guess again. Nothing about these guys is simple.

Even organizing them by year is a Rubik's Cube-level conundrum (I gotta get in the 80's mood, man). The dubious history of the slasher genre is rife with delayed releases due to moral panic or... well, terrible quality, as well as movies being re-released under a variety of names years later and being debuted in other countries before their American release. Basically, there is no way to get this perfect. But I tried, so here we go.

I'm obviously going to keep reviewing other movies while this is going on, and this feature might even take a backseat for weeks or even months at a time (come on, this is 300 movies we're talking about), but my goal as of right now is to try to get at least one a week (and hopefully more than that because at that rate, it will take me six years). Simple enough, right?

Some of these movies aren't available on Netflix. Those that aren't are usually avaiable online somewhere (And weirdly enough, a ton of them are on YouTube. I guess the producers of Christmas Evil already have enough baggage that they don't need to worry about copyright infringement.). But. There are some that you can only watch after rubbing a magic lamp while jumping on one foot backwards in a circle in front of your bathroom mirror at midnight during the full moon, so wish me luck.

Movies in bold are films I have already seen but will review again. Once I write each review, I will link to it from this page.