Please take a moment to find your tissues, then return to reading this post. We were trying to decide what to do to give her a proper sendoff when I mentioned my love of the Prom Night franchise, with its increasingly bizarre storylines that get more and more divorced from the original concept. She was enthralled and it was decided that one day before she left, we would watch all of them in one gigantic marathon.

Well it happened, and as luck would have it, the next film on my Census Bloodbath list is (by the hammer of Thor) Prom Night! It was meant to be.

For the next week or so, I will be posting a film-by-film retrospective of the Prom Night series, starting with the 1980 original! Let's get crackin'! 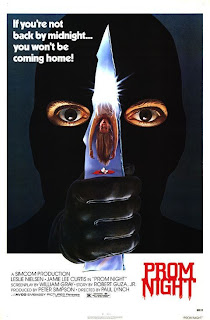 Legend has it that Canadian director Paul Lynch was struggling to find a backer for Prom Night until Jamie Lee Curtis signed on to the project. He got an offer from Paramount to put it in 300 theaters, but ended up teaming with Avco Embassy as their offer of 1200 theaters was too good to refuse. Instead, Paramount pushed out another film, a low-rent Halloween knockoff called Friday the 13th.

The rest, as they say, is history.

Despite accidentally enabling the Voorhees Dynasty, Prom Night does have its fair share of fans among slasher buffs and sane people alike. This is palpably for one reason above all - Jamie Lee Curtis. Other than that, you see, Prom Night is a pretty tame and exceedingly average Dead Teenagers movie.

It is of interest mainly as a sort of slasher textbook. Here you can see the pieces of the genre fall exactly into the places where they will remain until the slasher's first decline. The mysterious accident that occurs in flashback, the masked killer, branches being pulled back out of frame during long shot stalking scenes, sex and death and the virgin reigning supreme... They're all here in the purest, most distilled form. 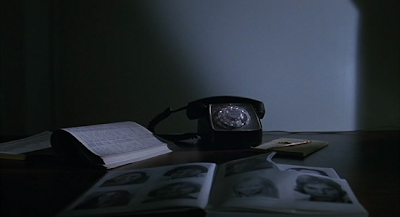 The DNA from this frame can be traced to Scream, Valentine, I Know What You Did Last Summer, and countless others.

The second point of interest - one only devout followers of the genre are aware of - is that this is a Canadian production. It is a general agreement that Canadian slasher movies, despite their intense desire to pretend that they take place in America (Prom Night's high school is called Alexander Hamilton High despite the Canadian license plates in the parking lot and the repressed accents bubbling beneath the surface - "Sorey aboat that. We'll fix it to-more-ow.") are just plain better than their American counterparts with characters that tend to be more fleshed out and better handling of the material.

Though Prom Night is a lesser example, Terror Train, Happy Birthday to Me, and My Bloody Valentine support that theory, among many others.

But enough dithering. This is a review, after all.

The film opens on a group of four children playing a game in a building that is the most menacing character in the movie. Halfway between an abandoned mental institution and some sort of old monastery, this is clearly no place for young ones, no matter how Canadian they are.

They're playing a loosely defined game that mostly involves hiding, then running around and chanting "KILL! KILL!" at the top of their lungs. The three Hammond siblings approach and Kim, the eldest, goes back to get a book she forgot (You can tell she's going to grow up to be Jamie Lee Curtis, because she has the slipperiest fingers when it comes to school supplies. And sharp weapons for that matter.) leaving her twin siblings Alex and Robin to play with the others.

The game gets a little too intense for Robin (Tammy Bourne), and she bolts, pursued relentlessly by the four. As they chant "KILL! KILL! KILL!" and back her into a corner, their words come true as she falls through a second story window to her death. The four vow never to speak of this again, and a local sex offender is accused of the crime. After a botched police chase, he is badly burned (this tends to happen. Again, this is a textbook example later to be found in The Burning, A Nightmare on Elm Street, and many of this film's sequels) and slides into a coma so the kids get off scot-free. 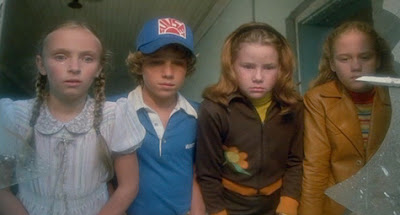 In an effort to disguise her identity, the one on the left dyed her hair black and was adopted into the Addams household.

Cut to six years later. The kids are all grown up and are preparing for their senior prom. Jude (Joy Thompson) is funny, smart, and single. She's quite a catch. Unfortunately she has such low self esteem that when she is catcalled on the street by this creep 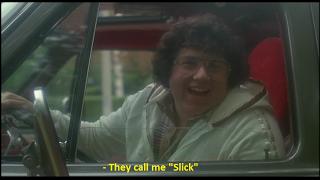 she not only takes him up on his offer of a ride to school, but agrees to go to prom with him. She even puts out and enjoys it despite evidence to the contrary. All the Oscars to Joy Thompson.

Wendy (Eddie Benton) is rich, gorgeous, and an all-around terrible person who you want to die from the very bottom of your heart the first time she walks into frame.

Nick (Casey Stevens) has gone through puberty and learned a couple life lessons, has dumped Wendy and is now deeply in love with Kim (Jamie Lee Curtis). To top it all off, they are Prom King and Prom Queen! Little Kimmy's done well for herself since her sister's death. During the procession, the announcer even says (literally) that they have been chosen as the most popular kids on campus.

Kelly (Marybeth Rubens) is also a character in the movie.

This is all established quite quickly, but Lynch isn't anxious to move on just yet, and these characters just sort of jangle around for about an hour before the prom sequence (and the killing) begins in earnest.  While it's not necessarily boring, it's also not really... well, anything.

High school drama ensues and the four grown-up kids receive obscene phone calls and hear strange noises when they're alone. After what I can only imagine was an intense discussion, the filmmakers decided to keep most of the focus on the high school drama. This would be welcome in another movie - one with characters that aren't Dixie Cups with faces drawn on, preferably. It was a team effort to even be able to tell the girls apart.

It all just feels very indulgent, almost like Jamie Lee funded the movie herself in order for us to see scenes of her being awesome at tennis and disco dancing and to show us how great her boobs are. 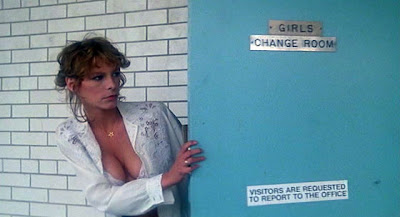 Clothed, of course. This is still Jamie Lee we're talking about.

The first real Body Count killing begins at the one hour mark, and it still leaves something to be desired. As does the second. And the third. Really, they're all pretty toothless especially when you consider that the Tom Savini-led Friday the 13th was still blowing through theaters at the time.

A prowling man in a ski mask whispers vaguely threatening... well, threats, as he mows down the core four and anyone who happens to get in the way. And let me just take a moment to say that whispering killers are hard to keep from crossing the line between scary and silly. Guess which side this one landed on?

Throats are slit, guts are stabbed, and a head rolls onto the catwalk (that one's actually pretty cool), but it's all playing second string to what they clearly thought was the most important part - the mystery.

Who is the killer?

There are a number of clear-cut suspects including Lou (David Mucci), a dirtbag who Wendy hires to pull a prank at prom; Principal Hammond (Leslie Nielsen. Yes, that Leslie Nielsen.), Kim's father who is understandably upset - prom is on the anniversary of his youngest daughter's death; the man who was wrongly accused of Robin's death and who has since escaped his mental institution; and Sykes (Robert Silverman), the groundskeeper who can't help but stare at the high school girls as they walk by. Mostly because they moon him, but still.

Once Lou is killed, the escapee is caught fifty miles away, and Groundskeeper Willie is exonerated, it's pretty clear who the killer is.

But first, some disco songs. 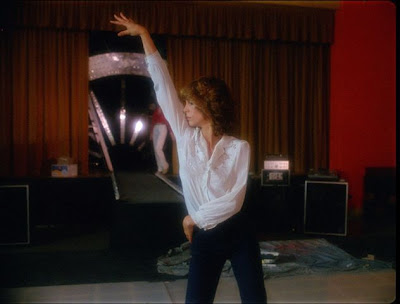 Prom Night frequently cuts back to the dance, not to establish time or keep up pacing or whatever, but rather to show off Jamie Lee's fancy moves. Full of super on-the-nose original songs like "Prom Night (Everything is Alright)," "Love Me Till I Die," and "Time to Turn Around," that it's keen to show off, the film's weak killings are interspersed with some truly bizarre scenes straight out of the outtakes to Saturday Night Fever. Keep an eye out for composer Paul Zaza. Just like Jason Voorhees, he keeps coming back movie after movie (Recent credits include Baby Geniuses and Superbabies: Baby Geniuses 2. This guy's a winner.).

In addition to being totally bananas, these scenes are indicative of a bigger problem, editing-wise. The scenes just don't make any sense in the order they're displayed. They frequently end too soon, leaving the audience with a weird jolting feeling, and at one point a couple is seen at a drive thru and then immediately in the middle of class.

OK yes, this movie has flaws. Allow me to alleviate some of the pain though.

With some experimental shots that work sporadically, like a series of smash cuts from telephone cord to the receiver or the high-vaulted ceiling shot that follows a little girl around a corner, it is clear that, for better or for worse, there is some sort of directorial hand involved in this movie. Most slasher films are cheap cash-ins, completely devoid of personality and despite its shabbiness, Prom Night is not one of them.

As I mentioned before, the obvious greatest strength the movie ever had (and they knew it) was Jamie Lee Curtis, the Scream Queen herself. While she's not exactly at her Laurie Strode Gold Standard, she fully immerses herself in the role and brings such natural charm it's impossible not to love her. Despite its myriad flaws, through whatever miracle she is in this project. She's the real takeaway here.

And you know what they say:

It's not who you go with.

It's who takes you home.

Killer: Spoilers [Alex Hammond (Michael Tough)]
Final Girl: Kim Hammond (Jamie Lee Curtis)
Best Kill: A kid is strangled behind the wheel and his van flies off a cliff, hitting the bluffs and exploding.
Sign of the Times: Dear Jesus all of this 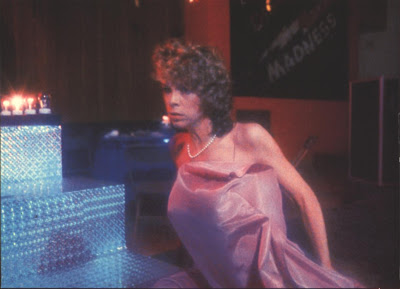 Scariest Moment: The opening scene, in which the camera pans around a creepy abandoned building as children chant "The killer is coming!"
Weirdest Moment: There is a prolonged disco dance sequence that lasts for 3 minutes and 7 seconds. I counted every microsecond of it. Let Prom Night go down in history as the only slasher movie to ever need a choreographer.
Champion Dialogue: "For a guy so fast on the disco floor, you are the slowest."
Body Count: 8; 1 nurse murdered on the sidelines, 6 on Prom Night, and 1 six years before.
TL;DR: Prom Night is a shabby but earnest by-the-book slasher, and the presence of Jamie Lee Curtis knocks it up a couple of points.
Rating: 6/10
Word Count: 1997
Reviews In This Series
Prom Night (Lynch, 1980)
Hello Mary Lou: Prom Night II (Pittman, 1987)
Prom Night III: The Last Kiss (Oliver/Simpson, 1990)
Prom Night IV: Deliver Us From Evil (Borris, 1992)
Prom Night (McCormick, 2008)
Also sprach Brennan at 7:31 PM