CinemaBeach: Music of the Night

It's called The Ten Most Well-Used Songs in Horror Movies. 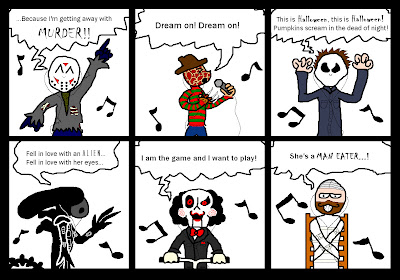 One of the most important aspects of any film, especially a horror film, is the music. As this video exemplifies, the background score can make or break the mood of the scene. Most movies, especially low budget ones, use an original score to avoid copyright issues, but sometimes movies utilize pre-existing songs already recorded by other artists to enhance the mood or ground the film in a particular era. Sometimes this is a complete disaster (think of any film that used a Duran Duran song in the 80′s) but sometimes a perfectly chosen song can make for a historic scene.
Horror movies are notorious for finding the creep factor in innocuous songs, so here are the best uses of pre-recorded songs to date.
10. Mr. Sandman, The Chordettes (Halloween H20: Twenty Years Later)

Now, this song works the best because it was already previously used during the closing credits of 1981′s Halloween II. Halloween H20 was Jamie Lee Curtis’ way of wrapping up her character’s story arc and as such, it spent a lot of time hearkening back to the previous movies in the franchise that featured her character Laurie Strode. Although smell is the sense most associated with memory, sound is a close second and the use of this song in the opening scene immediately brings any fan of the franchise back. Also, its innate cheerfulness is an unsettling juxtaposition with the brutal stabbings it precedes.
9. Something to Die For, The Sounds (Scream 4)

Yes, Scream 4 might be an uneven movie. But nothing can beat that opening sequence. Sidney is returning for the first time to her hometown of Woodsboro after the bloodbath. Now a successful author and an empowered woman, she sweeps into town with a newfound confidence, accompanied by the pulsing rhythm of this chick-led Swedish rock band. “Something to Die For” isn’t used to scare – it’s used to inject the film with energy as we are reintroduced to a protagonist we haven’t seen in a decade.
8. Vudú, Carlos Ann ( [REC] )

[REC], otherwise known as the Spanish found footage film that Quarantine is based on and my all-time favorite horror film, is the grueling story of a small time news anchor and her cameraman who are tailing a team of firefighters when they get trapped in an apartment building with a horde of rage virus-infected zombies. To preserve the authenticity and realism of the film, no soundtrack is used until the final scream fades and the screen goes black. The credits burst onto the screen to the opening chords of this song, which can only be described as Spanish rockabilly. The perfect credits song, it provides us with a sense of relief that the film is over and punctuates the energy of the film in an indescribably perfect manner.
7. Tiptoe Through the Tulips, Tiny Tim (Insidious)

Do I even have to explain this one? Not only is the song outrageously creepy on its own, it accompanies a scene where absolutely nobody should be in the house. Horror movies figured out pretty early that cheerful songs can stab you like a knife with the right visuals, and James Wan’s recent works are nothing if not for calling upon classic moves like this. And boy this one is a doozy.
6. American Girl, Tom Petty (Silence of the Lambs)

Don’t tell me you’ve never been afraid when pulling up to your parking spot in the middle of the night. This is the quintessential American nightmare. A normal night, a normal girl, a normal song playing on the radio, a night stalker lying in wait to harvest your sking.
5. Don’t Fear the Reaper, Blue Öyster Cult (Halloween) and Gus (Scream)

Death stalks, silent, almost invisible. In the original Halloween, the original Blue Öyster Cult song is playing softly on the radio as Laurie Strode and her friend Annie Brackett are being followed by a madman in a William Shatner mask. Wes Craven’s postmodern mid-90′s horror masterpiece Scream has a similar scene when Sidney is visited by her creepy boyfriend in the middle of the night in a direct homage to John Carpenter’s seminal classic.
4. Don’t Stop Me Now, Queen (Shaun of the Dead)

In the funniest scene of an outrageously funny horror comedy, Queen’s classic song is used to great effect in the rhytmic destruction of the shambling undead.
3. Singin’ in the Rain (A Clockwork Orange)

If you’ve seen Kubrick’s adaptation of Anthony Burgess’ classic novel, you know exactly what scene I’m referring to and I’m not about to link to it from here. Here’s the original song, in case you need a cheerful break from this list.
2. The Star-Spangled Banner (Poltergeist)

The famous TV sign-off that signaled that the night’s horrors were about to start. I’m so glad televisions don’t do this anymore, because I don’t think any of us would ever sleep again. They’re heeeeeeeere.
1. Turn Around, Look At Me, The Lettermen (Final Destination 3)

The Final Destination films are chock full of foreshadowing and in jokes. Usually, when the spirit of death is about to claim another soul, he is accompanied by a song. In the first film, it’s John Denver’s “Rocky Mountain High” (because he died in a plane crash, which is a major plot point) and in the fifth it’s Kansas’ “Dust in the Wind” for obvious reasons. However, despite the third film’s lack of grace, this song is a masterpiece of unintentional creepiness that brings a huge amount of atmosphere to a film that desperately needs it.
Word Count: 928
Also sprach Brennan at 11:26 AM