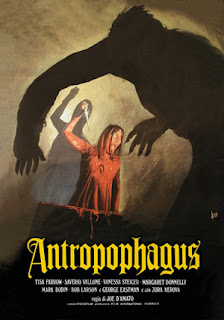 A word on the Video Nasty: Around 1982, British censors started to realize that some of the horror films coming out nowadays were getting a tad gory. Instead of doing the polite British thing and turning their noses up but letting it happen, they ripped a page from America's songbook and took a wild stand against something they didn't totally comprehend (Commentary! I bet you weren't expecting that in your slasher review).

A whole slew of late 70's and early 80's slasher films (along with grindhouse, cannibal, and zombie movies) landed on what became known colloquially as the "Video Nasties" list, a strict censorship code which essentially blackballed films from ever playing in Britain, sometimes allowing them to be released in heavily edited (read: boring) formats.

Anthropophagus aka The Grim Reaper is such a film. Considering that the only other Video Nasties I've seen were The Evil Dead and The Burning (the former being a wonderfully campy debut for genre maven Sam Raimi and the latter being the single best slasher film of 1982), I was pretty excited.

This film is in Italian (Questionably. More on that in another article. Italian cinema was weird about languages around this time.), but opens on a remote island in Greece as a pair of German tourists relax on the beach. I'm going to cut the subtitle editor some slack - maybe his recently deceased dog was a German Shepherd and he couldn't handle the associated emotions - but I had to rely entirely on my German 101A knowledge to understand any of the dialogue.

"This water is ice cold!"

Anyway, because they are a couple and they are in the first ten minutes of a slasher movie, they die. 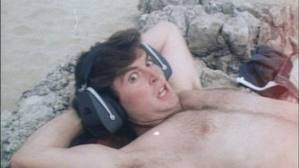 A group of tourists has just descended onto the coast of Greece so it's time to Meet the κρέας! This ragtag band includes Andy (who I swear was called Alan in the subtitles, but either way he's played by Saverio Vallone), the adventurer med student who had the bright idea to sail around the Greek archipelago; Maggie (Serena Grandi, who we'll meet again later as the title character in Delirium: Photos of Gloria), who is pregnant; her husband Arnold (Bob Larson) who isn't the most attentive person in the world, frequently leaving her behind to pursue other activities; Carol (Zora Kerova), Andy's sister and Master of Tarot Cards; her womanizing boyfriend Daniel (Mark Bodin); and Julie (Tisa Farrow) who isn't actually a part of the group but hitched a ride on their boat to come visit some friends at (dun dun DUN) an eerily familiar remote Greek island.

Julie is sorry to intrude upon their leisure trip, but due to unforeseen circumstances they're her only option. The men of the group are less sorry, going out of their way to flirt with the new girl to the dismay of Carol and Maggie.

As revealed through a series of heavy breathing-filled POV shots, Maggie sprains her ankle and decides to stay with the captain on the boat while the others explore the island. The village is deserted... The telegraph is broken... There are no phones... When they get back, Maggie has vanished and the boat is drifting out to sea... It's not all Greek to me, they're in trouble.

To make a long story short, they hole up in Julie's friends' empty house for the night and find themselves pursued by a cannibalistic madman (George Eastman) who has apparently devoured every living inhabitant of the island. He spends most of the time in shadow, which is a plus considering that his makeup looks something like a linebacker crossed with a lizard. 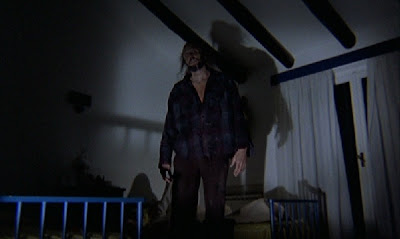 According to the backstory he's just really sunburned. No, I'm not kidding. Although, since this is Italian we will not call this stupid and allow it to represent the fact that he has become something less than human due to the insanity brought on by being forced to kill and eat his wife and child when adrift at sea. Yeah, that sounds more like it. Viva Italia!

Like most slashers, in between the kill scenes we get to spend some time with our characters and watch their relationships develop. Or, as with most slashers, we watch "characters" develop their "relationships." These scenes land somewhere in the middle of the spectrum because while they don't have a lot of, say, thematic weight, they are certainly entertaining and much more nuanced than your average hack 'n kill.

Another element that makes Anthropophagus a cut above the rest (if you'll forgive that worthless pun) is that its characters are all adults, and as such their interpersonal drama has more heft and draw. And maybe this is just because they were speaking Italian, but the genre's typical bad acting was at an all time low. Kerova in particular burns with the flames of a thousand Mediterranean suns.

So the movie is content to trundle along on its fairly standard course, remaining an above average and fun slasher movie but not anything more and only being intermittently nasty. There's a cleaver in the face here, a severed head in a bucket there. It's pretty gory (and great), but it's nothing to write letters to the editor about.

And then. And then.

Things get real. After a series of three scenes that are much too long for their own good (I wrote in my notes that if the movie continued like this, I'd have to mark it down a grade), the blood fuel is poured on the nightmare fire and the real fun begins.

As the island crew is whittled down to only a few stragglers, Julie and a blind French girl who can smell the killer (Another overwhelmingly Italian plot point that works beautifully. It adds tension like you wouldn't believe.) are trapped in the very house where they learn the killer's story (that he's a man who went insane after being forced to Donner Party his own family). Driven to insanity (for to return to being sane would be to return to a world without his beloved wife and child, forever haunted by the knowledge that he was personally responsible for their demise), he has become a ravenous beast stripped of all human dignity.

This is underscored by a moment where Maggie, the pregnant girl who it turns out is a lot hardier and more alive than we thought, tries to convince the Beast not to kill her for she is with child. He responds by choking her to death, ripping out the fetus, and eating it. Video nasty you say? Yeah, it's pretty gross and gory and immoral and whatever, but 1) It's freaking awesome, 2) It's the most bizarre, jaw-dropping horror scene I've ever witnessed, and 3) It's actually relevant to this man's character arc and descent into barbarity.

So we have elements of shock and awe being put to good use for the first time in, well, ever. We have a Final Girl who does pretty well for herself, smashing mirrors and commanding spineless friends around and generally kicking butt. Her young ward gets her scalp ripped off and her throat devoured (they must have saved their entire effects budget for this finale, and they were absolutely correct in that decision), and then scary things happen! In a slasher film!

Julie ends up hanging by a broken wrist on a rope inside a well, with the Beast beneath her steadily climbing the ladder toward her. This is terrifying, well-shot, and tremendously effective in a way few American slasher movies could have ever hoped to compete with. She gets out but she is still restrained by the rope, but Andy saves the day by burying a pick axe into the monster's gut.

And then, the monster does what we never would have expected but secretly knew in our gut all along - he devours himself, the final link in the chain of torment and hunger.

Part of a balanced breakfast.

Is it Nasty? Yes. Is it great gory fun? Yes. Is it thematically resonant? Weirdly, yes. This is no Shakespeare obviously, but it has its own very straightforward arc that really makes you think.

One final thing before I wrap this up - the cinematography was inexcusably good. What I was primarily startled by was the fact that I could actually see what was happening. What luxury!

There are a couple deep focus shots that use background elements to comment on foreground elements, which is totally film 101 stuff but at least they're doing it! There are clever frame constructions using reflections in cleavers and dark pools of shadow over the Beast's eye sockets and it's generally not a hilariously ugly affair.

This movie is by no means perfect, but it's a little-seen gem that I would highly recommend for gorehounds and genre fans alike. 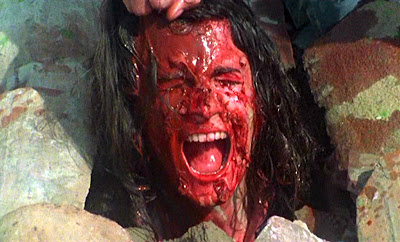 This picture really shouldn't make me feel good, but I'm just so relieved that one of these films has some value to it. And not half bad effects considering the region and time period.

Killer: Nikos Karamanlis aka The Beast (George Eastman)
Final Girl: Julie (Tisa Farrow)
Best Kill: Did I mention he ate a baby?
Sign of the Times: Since I have such a ball writing descriptions of the musical scores to 80's slasher movies, allow me to present you with several options of from which you can pick your favorite:
Scariest Moment: A girl pops out of a wine cask, stained red, and attacks Daniel in the basement.
Weirdest Moment: There is a particularly endearing Spring-Loaded Cat scare in which an adorable kitten is dropped onto the keys of a piano.
Champion Dialogue: (Arnold to his wife as she vomits overboard) "Don't worry dear, I'm feeling a little seasick myself."
Body Count: 13; not including Ariette's parents or the entire village, but including the fetus.
TL;DR: Anthropophagus can drag occasionally, but it has fairly well-realized characters, fun gore scenes, and a killer final twenty minutes.
Rating: 7/10
Word Count: 1822
Also sprach Brennan at 8:07 AM