Beat It, Essay: Music Is For The Birds

I've been taking a Music in Film class! I had to write an essay about a film score and because I have an insatiable need to stick it to the man, I wrote about The Birds, which has not a single note of written orchestration. Pray for me.

Update: For those of you who found this through Google, I got an "A" on the paper, so it's actually a solid model. Good luck!


Discuss the role of music in a single film created in 1970 or before. 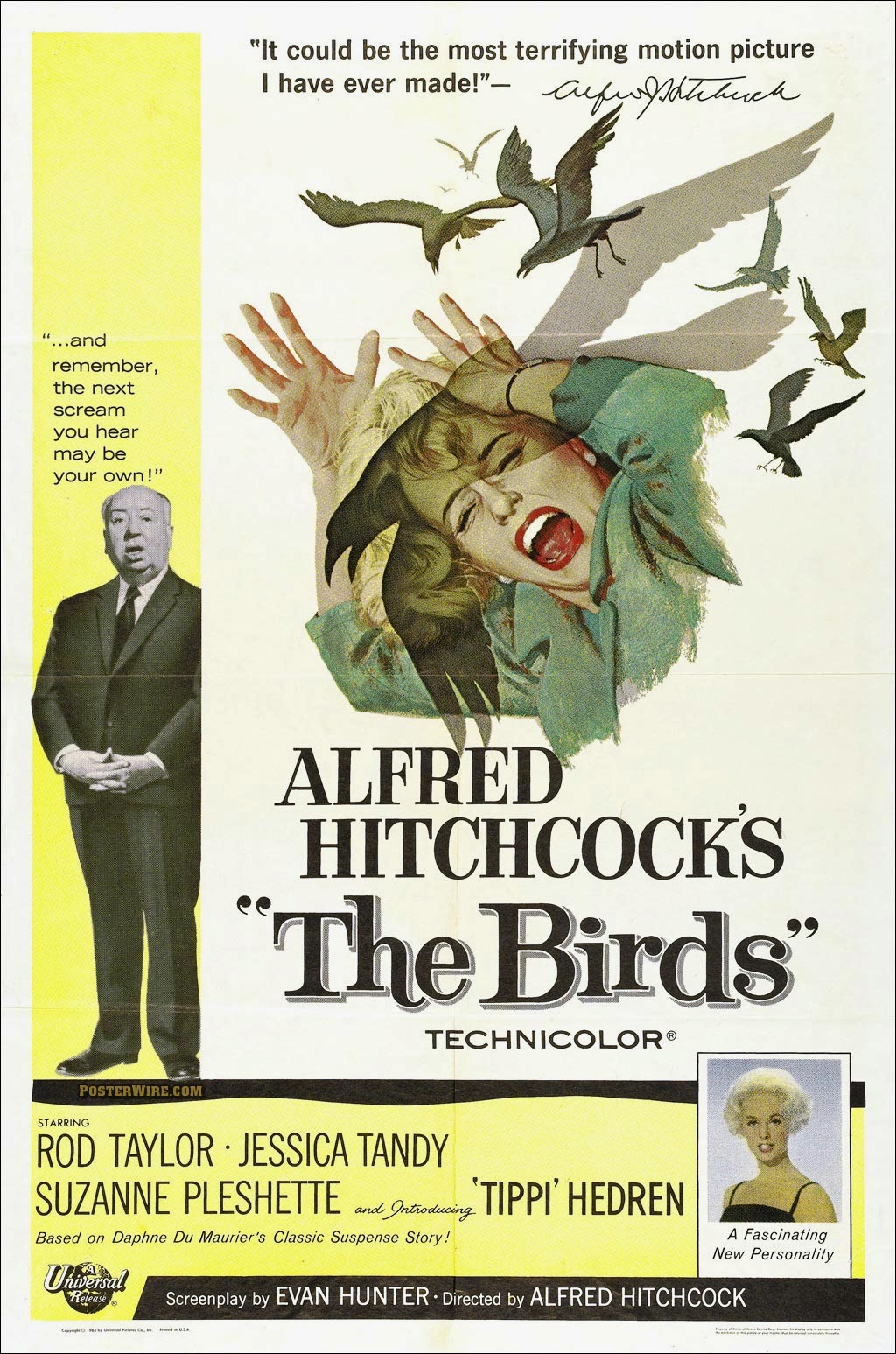 The famed film composer Bernard Hermann is quite well known for having created some of the most memorable film scores in human history. After scoring the indelible classic Citizen Kane, his career took him even further when he was asked to pen the compositions for Alfred Hitchcock’s Psycho. His use of shrill dissonance and solely string instrumentation was tremendously beneficial in putting the audience in the mindset of a psychotic killer. The theme for the shower scene is perhaps one of the most well-known film compositions in the entire world.

But one of Hermann’s other great compositional triumphs is hardly even a score at all, at least in the traditional sense. When he was asked to develop the sound for Hitchcock’s horror follow-up The Birds, he made the ingenious decision not to include a single piece of non-diegetic music. This worked perfectly because The Birds made a habit out of defying audience expectations: The plot of the entire first act is a decoy, turning what seemed like a screwball romantic comedy on its head once the first bird attacked. The Birds also exhibited an entirely unprecedented level of gore for the time, rendered in beautiful full color.

In every regard, The Birds was pushing the envelope and Hermann recognized the importance of keeping that quality consistent within the score. Where the audience, after decades of movie watching was expecting either a lush post-romantic score (assuming a romance) or a dissonant modern score (assuming a horror), what they got instead was absolutely nothing. Due to the almost unconscious nature of film music, most audience members wouldn’t have actively recognized the lack of a score but it would have continuously registered in the back of their minds, creating an unbearable psychological tension during the first act of the film, even before anything goes wrong. 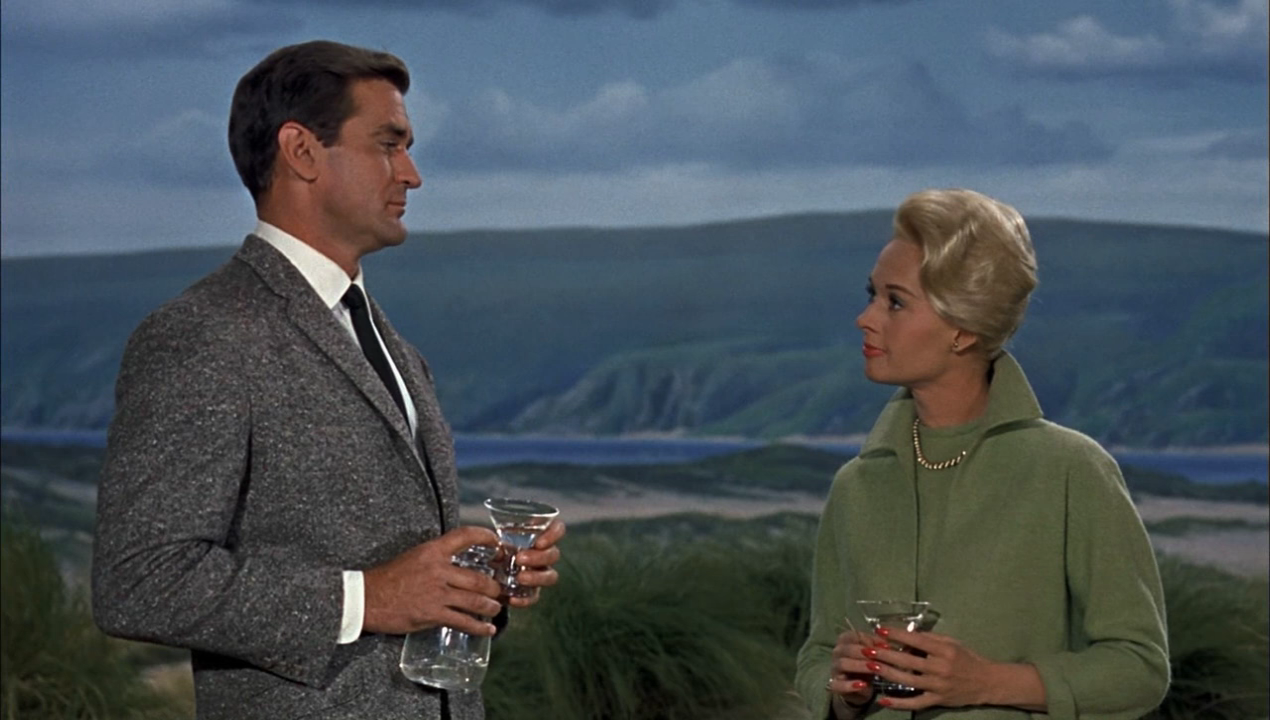 This is where Hermann’s genius works its magic. Despite its technical lack of instrumentation, his silences work in the exact same manner as a traditional film score, playing with the audience’s preconceived notions of certain styles, motifs, and instrumental colors and their meanings within the context of cinema. A traditional film might use a sultry sax to signify a sexual scenario or a sweeping orchestra to denote an astounding act of heroism because it effortlessly puts the audience in the right mindset thanks to their experiences with similar techniques in previous films. It is this exact prior experience that Hermann exploits to create the oppressive atmosphere that haunts the entirety of the film.

Some might argue that Hermann’s work on The Birds isn’t a true score, but that is ignoring its base nature as a way of using music to manipulate an audience’s emotions. That is, in fact, exactly what Hermann is doing here, but simply in a wildly alternative format. And that argument ignores the presence of source music and sound composition, all of which was carefully selected by the composer himself for maximum effect and terror. Although sound design is somewhat out of the scope of this essay, Hermann’s use of flapping wings, clacking beaks, and avian squawks provides an unsettling rhythm and quasi-score of its own.

The two most important musical moments of the film are source music, impeccably chosen to break the silence at the two most opportune times to set the opposing tones of the beginning and middle of the film. The first, Debussy’s “Arabesque No. 1 in E” can be heard on the radio during the first, romantic, portion of the film. It highlights the elegant nature of Tippi Hedren’s character Melanie Daniels as well as the wistful romance with which she approaches her life. This song choice is immensely important because it comes early on in the film, lulling the audience into a false sense of security, both in terms of film composition (having heard an expected classical composition early on would make it that much more unbearable during the absence of regular score) and of movie tone (one of pure classical romance and the innocence of the era).

However, that security is shattered with the startling placement of the next musical piece. After already having an uncomfortable encounter with the business end of a seagull, Melanie Daniels is on edge and taking a smoke break outside of the local elementary school while she is waiting for her friend – a teacher – to get off of work.

During this scene, the children’s choir is singing “Rissle-dy Rossle-dy,” a derivation of a traditional Scottish folk song while black crows slowly gather on a playground behind an unsuspecting Melanie. 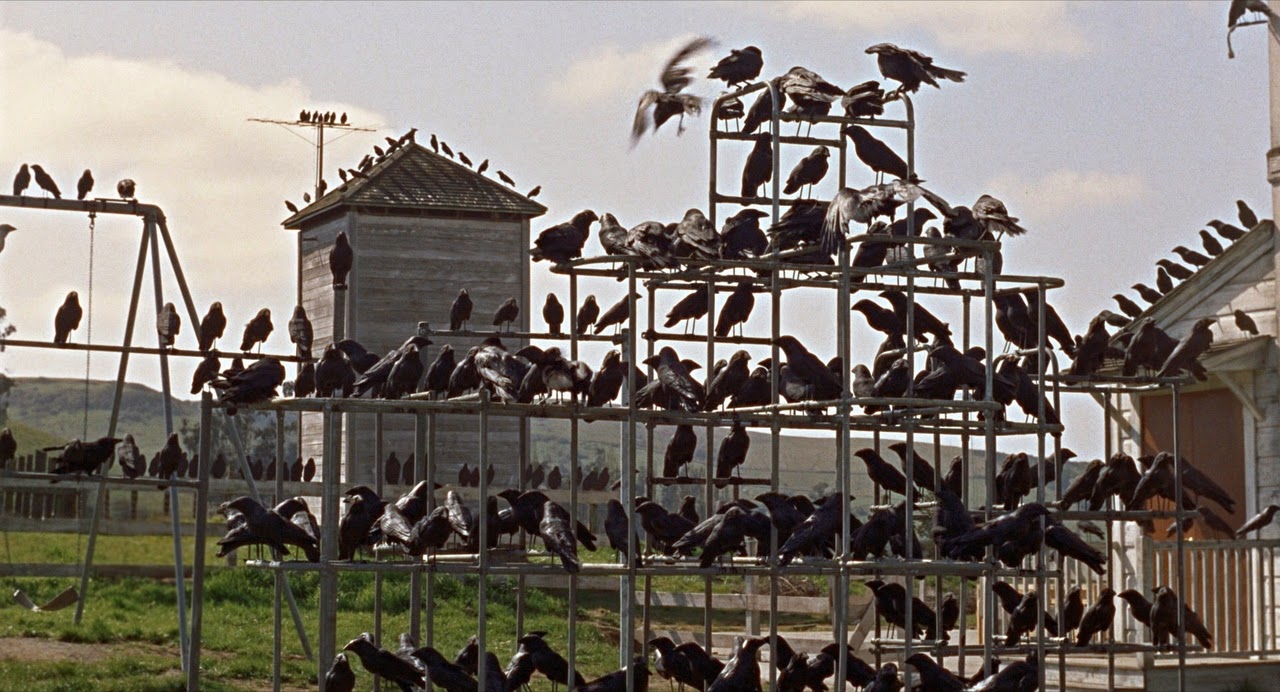 This comes after a long period in which the film has been utterly devoid of music and the innocence and joy of the song provides a modicum of relief in the listener. That is, until the murder of crows begins to roost. With the arrival of each additional crow and the threat of an impending attack, the children’s song grows more and more eerie, replacing the pleasant tone with the terrible potential of the slaughter of unaware innocents.

This is the most effective scene in the whole film, entirely because of Hermann’s unprecedented skill in using music (and its absence) to manipulate an audience. It’s absolutely brilliant, using the infrequent source music and ample expectations due to cinematic precedents in order to to play the audience like a fiddle – another alternative form of orchestration. Hermann will forever be remembered for his contributions to Kane and Psycho, but The Birds is a sonic experience of unparalleled skill so subtle that it will rarely be appreciated to the extent that it deserves.

What should be one of the most memorable scores in human history will perhaps never attain such status due to the completely subliminal effect it creates. Nobody even realizes that it exists! That is the beauty of Hermann’s work on this film and it’s certainly no mistake that he was paid the full salary of a traditional composer.
Word Count: 1047
Also sprach Brennan at 12:53 PM